Wilkes has monster night in leading Clovers over OV

By CHUCK HESS, For the Banner Graphic 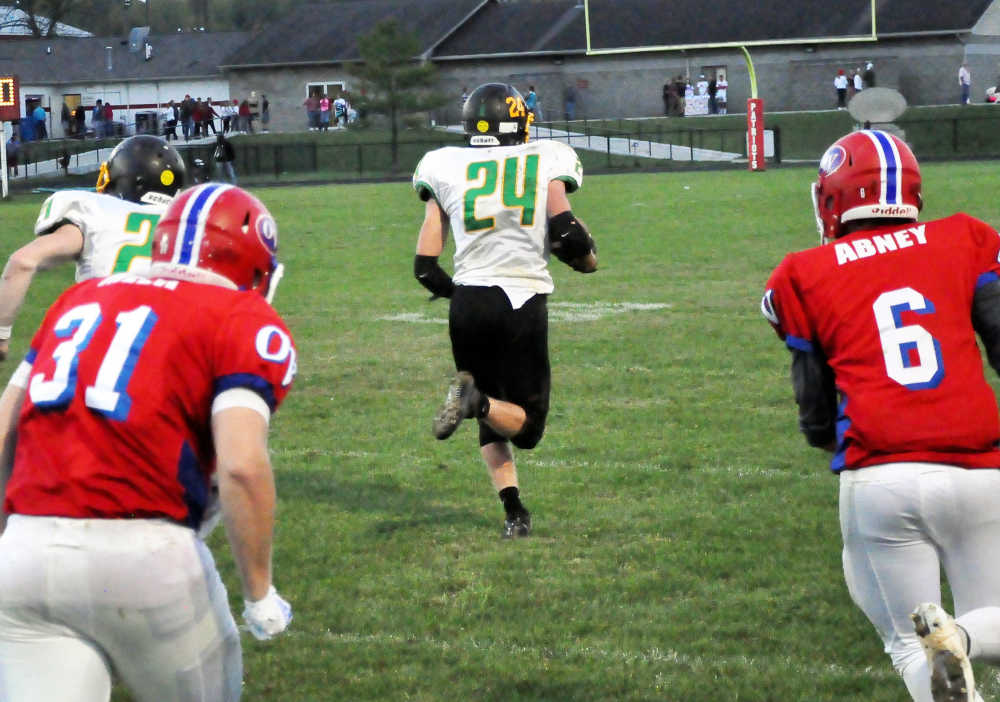 Jake Wilkes takes off for the end zone on one of his five touchdown runs on Friday night.
Chuck Hess photo

SPENCER — Powered by a big night from running back Jake Wilkes, Cloverdale ran past Owen Valley Friday in a 56-7 win.

The senior compiled 231 yards and five touchdowns as the Clovers won their second straight to move to 2-5 on the season (2-2 WIC).

The game remained scoreless for much of the first quarter, but the Clovers got on the board first with James Johnson catching a 10-yard touchdown pass from Parker Watts. A failed two-point conversion left the score at 6-0 after one.

Wilkes had a long run on the next Clover possession, but it ended in a turnover on downs. However, Caydhan Stevens intercepted an Owen Valley pass to set the Clovers up at the Patriot 30-yard line.

Penalties couldn’t keep Cloverdale out of the end zone, with Jake Smith running 42 yards for the score and a 12-0 lead.

Stevens was in the right place again on the next possession, recovering a Patriot fumble, but the Clovers failed to convert.

As halftime approached, Wilkes got his first, and longest, score of the game on an 80-yard run.

Wilkes was back at again in the third quarter, scoring on runs of 59 and six yards early in the quarter.

The Patriots found the end zone for the only time of the night in the third, but the Clovers managed 30 points in the frame for a 48-7 lead.

Cloverdale added one score in the fourth for a 56-7 final.

James Johnson had a 10-yard TD

Jake Smith had a 42-yard TD

Logan Abner had a 48-yard TD

Cloverdale will visit Indian Creek at 7 p.m. next Friday.