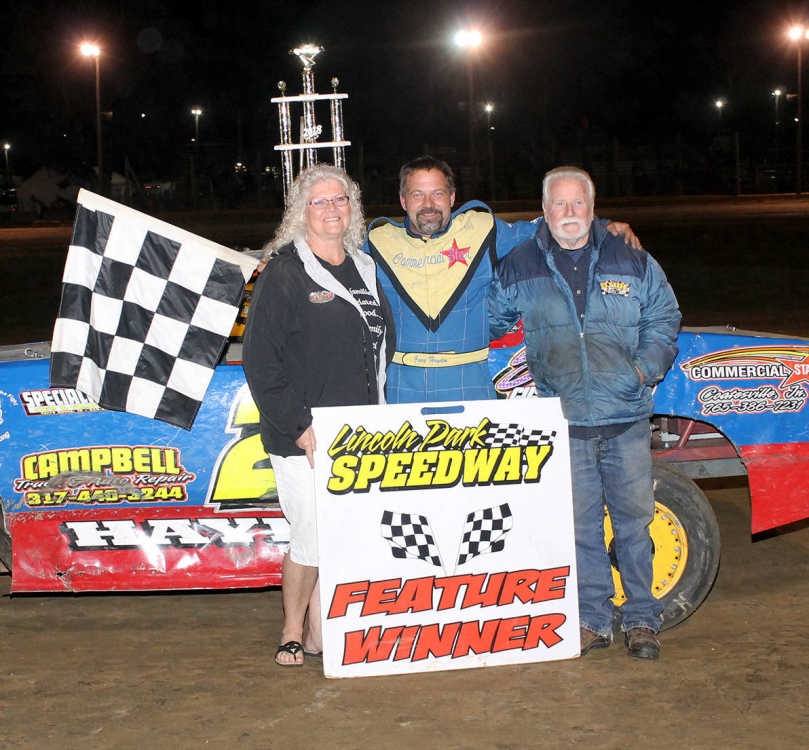 PUTNAMVILLE – The final curtain came down on the 2018 racing season at Lincoln Park Speedway on Saturday as Shane Cockrum, Derek Groomer, Bryce Shidler and Gary Hayden finished the year with victories.

For three of the those drivers it was business as usual in getting to victory lane, but for Hayden the win meant a little more.

The Coatesville native picked up his first win in what he noted was close to 20 years of racing.

Hayden started on the pole of the 15-lap bomber A-main and made that position stick for the duration of the race. He would have plenty of company in chasing the win however as season points champion Jordan Almanza ended up right on his bumper late in the race. Early on in the race it was the No. C98 of Chad Steinert that gave chase in the second spot. Almanza started seventh, but closed quickly on the front runners and was charged with fending off Josh Litton by lap five as Mark Smith and Andrew Pollock ran in a top-five spot.

By lap 10 it was Hayden having opened up a small gap on the field as Steinert ran second. Behind him it was Almanza and Smith that were door-to-door for the third spot followed by Pollock and David Wallen. Over the final few circuits, Hayden hit all of his marks and crossed the finish line on top. Almanza would eventually take down the second spot ahead of Steinert, Smith and Pollock.

Thirty-seven sprint cars unloaded in the LPS pits Saturday night, but no one could catch Cockrum at the finish as the Benton, Ill., native picked up win number six this season.

Jadon Rogers led early on before Brandon Mattox and Brent Beauchamp got together in turn one while running in top-five spots. A string of cautions with a pair of red flags greatly slowed the pace of the early laps. Once the field re-took the green flag, Cockrum made the pass of Rogers and began to check out on the rest of the field.

Cockrum built a straightaway lead and worked traffic flawlessly to take the win over Jordan Kinser, who raced forward from a 16th-place starting position. Matthew McDonald took third ahead of Beauchamp and Daylan Chambers.

Another familiar face was in victory lane in the UMP Modified main event as Groomer scored win number 10 at LPS this season. The Bloomington, Ind. based driver built a big lead early, but eventually would have to hold off Tim Prince at the finish line. Richie Lex came forward to get past Jay Humphrey Jr. late in the 20-lap race. Lex would take third ahead of James Walters and Humphrey.

In the UMP Super Stock feature it was Shidler capping his championship season with another victory. Shidler led Wes McClara for the duration of the race as the two started on the front row for the feature. Josh Settles ran third for much of the race, but would settle for fifth as Justin Massie came forward to take third ahead of Chris Bennett.