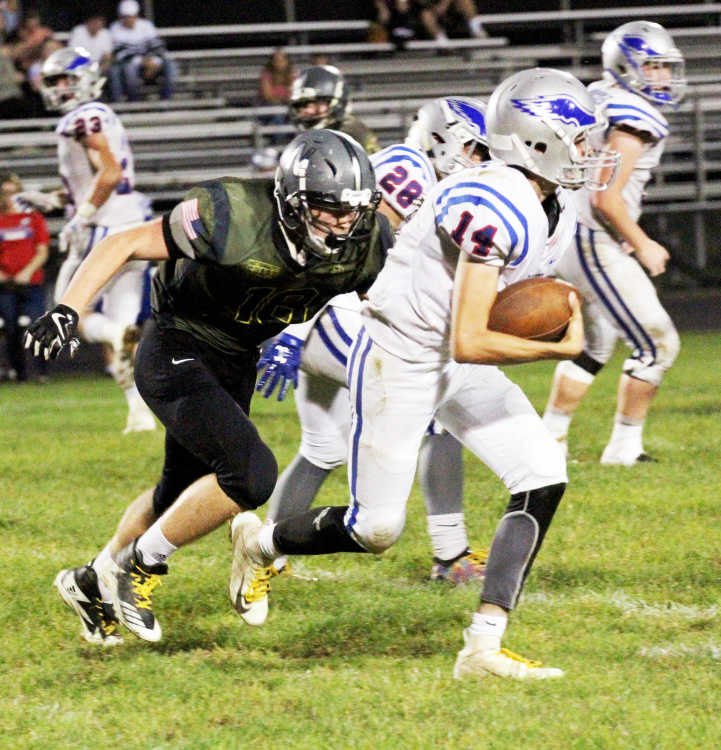 BRAZIL Ś NorthviewÆs big-play ability was on full display Friday night as the unbeaten Knights powered away from visiting South Putnam to remain unbeaten with a 63-8 victory over the Eagles.

The Knights scored three touchdowns over a three-minute period of the second quarter to open a gap that the Eagles were unable to overcome. Northview improved to 8-0 and will take on Indian Creek for the Western Indiana Conference title on Friday evening while the Eagles fell to 3-5 overall.

While the final margin wasnÆt what the Eagles were hoping for coming into the matchup, South Putnam did accomplish what no other team has this season.

The Eagles had the Knights in a deficit.

South Putnam came out with a short, quick passing game that gave NorthviewÆs defense some problems early on. Coupled with a power run game, the Eagles moved the ball into KnightsÆ territory in the opening drive of the contest.

Quarterback Riley Stone completed a nine- yard pass to Dalton Scott for a first down and a Northview pass interference call aided the drive, which stalled at midfield.

The Knights roared back in their first possession as quarterback Trey Shaw found Trevor Cook for a 31-yard gain and MJ Shelton raced for a 26-yard run. The senior running back put Northview up 7-0 with a 10-yard TD run midway through the first period.

Credit the Eagles as the visitors didnÆt flinch and came right back at the Knights.

Stone hit Devin Cashion for a short completion and Scott hauled in an 11-yard pass. The senior running back also carried three times for 15 yards and set up a 23-yard pass reception by Jackson Wood.

The Eagles continued to march on Northview and completed a 12-play, 80-yard scoring drive as Stone found Scott for a 25-yard TD pass. The Eagles went for the two-point conversion and Scott scored to put South Putnam on top 8-7 early in the second quarter.

It was the first time Northview had trailed all season.

ōI think (South Putnam) did a good job with their game plan. They came out in formations that we hadnÆt seen and some motions that were causing us some problems,ö Northview head coach Mark Raetz said. ōIt took us awhile in that first quarter to get adjusted to some things that we needed to do. But from that point on I thought we played pretty well.ö

Finding themselves in an unfamiliar deficit, the Knights answered the bell quickly.

Shaw called his own number on the first play of the next drive and raced 62-yards for a touchdown. The Northview defense forced a three-and-out by the EaglesÆ offense and punted. On the first play of the KnightsÆ drive, Shaw again found an opening and weaved for a 32-yard score. Cook intercepted a pass by Stone on the second Eagle play of the following drive to set up a short field for the Knights. Shelton powered in on the second play for a 28-8 Knights lead.

Shaw added his third rushing touchdown of the game before halftime as the senior QB carried seven times for 147 yards and three scores and later threw for one.

The Knights defense stepped up its level of play after intermission and did not allow an Eagle first down, which in turn gave Northview a short field several times.

Shelton scored on NorthviewÆs first drive of the half on a 46-yard run that completed a 93-yard, three touchdown game. Shaw hit Trevor Cook for a five-yard TD in the third period.

A fake punt by the Eagles resulted in an interception in the fourth quarter. Korbin Allen powered in from 14 yards out two plays later. Freshman Colton McKee finished the scoring when he intercepted a pass and raced 30 yards for the TD.