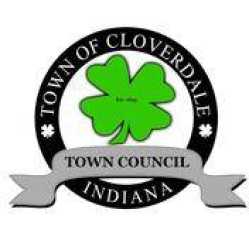 CLOVERDALE -- After its regular meeting Tuesday evening that was shorter than usual and with council member Don Sublett and some regular attendees absent, the Cloverdale Town Council will be weighing the impact of expanding the town’s boundaries.

After addressing several other issues related to Cloverdale’s water utility management, town officials opened up the possibility of taking control of the two-mile radius surrounding the town limits.

The two-mile radius is an issue that has bridged utilities and local representation in the town’s politics before. Cloverdale previously controlled the two-mile radius before it was relinquished to county control around 2000.

Representation was the more pressing issue than utilities for both town officials and the public. This is because Cloverdale currently provides utilities to homes and businesses outside the town limits, a dynamic that won’t change but may effectively leave some out of the decision-making.

That was the prime issue for Stardust Hills homeowner and landlord Don Gedert, who provided that lack of representation is the main complaint he has heard from those who live or work inside the two-mile radius.

“The people in the two-mile radius aren’t represented in town politics," Gedert said. “That’s why this has been brought up, because they don’t have a say in what happens.”

Town Attorney Daniel Hofmann then asked Gedert to describe the nature of the complaints more specifically, to which he said that they are not represented on local boards, even though they may have businesses or themselves reside in Cloverdale.

“Now I’m not an attorney, sir,” Gedert laughed somewhat, “but I’m just saying that this is the biggest complaint I’ve heard from residents in the area, and it would be worth looking into it.”

As to the legal implications of taking control of the two-mile radius again, Hofmann expressed that transparency and goodwill would need to be the priorities, as the county currently has jurisdiction outside Cloverdale’s boundaries.

“The Planning Commission would have to make a change to its ordinance to reflect that we have control,” he said. “Other than that, we just need to be up front about us extending our borders and do our thing.”

“What is important is that we let everybody in as much as we can,” Council President Coweta Patton added. “If it lets us have some oversight over these new businesses coming in, it might be a good thing.”

The council left the issue of the two-mile radius open for future meetings, but implied that action could be taken soon once Hofmann has conducted more research into its options.

The council also heard a pair of issues brought by Town Manager Wayne Galloway regarding the town’s water systems. Galloway requested the approval of a new return activated sludge (RAS) pump, which is a crucial part in the breakdown of organic material in wastewater. The council approved the pump for $5,671.

Galloway also said that the town’s water plant would need an update to its supervisory control and data acquisition (SCADA) system, which monitors the facility’s operations. The current system is of relative age, and Galloway said that new advances in mobile technology allow for better responses to emergencies. He said that engineer Bob Curry is currently accepting bids for the upgrade.

Galloway finally provided an update on renovations occurring at the vacant former Wendy’s at 1015 N. Main St. He related that the building’s floors are being repaired and the equipment left over from the fast food restaurant has been evaluated. The plan provided by the owner is for the space to be reopened as a general eatery with Italian food and other options.

Additionally, Town Marshal Steve Hibler relayed that Reserve Deputy Braylon Gagnon had left the Cloverdale Police Department to begin his new position as a deputy prosecutor in Tippecanoe County. In addition to his monthly report, Hibler pointed out that CPD had logged 84,000 miles within the confines of Cloverdale thus far this year, commenting on the diligence of the department.

Finally, a resident related that Stardust Hills Owners Association President John Berry had been badly injured in a recent fall. Although Berry will be able to accomplish fewer tasks than before, he said that Berry is in good spirits and would appreciate get-well cards while he recovers at Mill Pond Health Campus in the coming weeks.

The next regular council meeting is scheduled for Tuesday, Dec. 11 at 7 p.m. in the Cloverdale Town Hall.