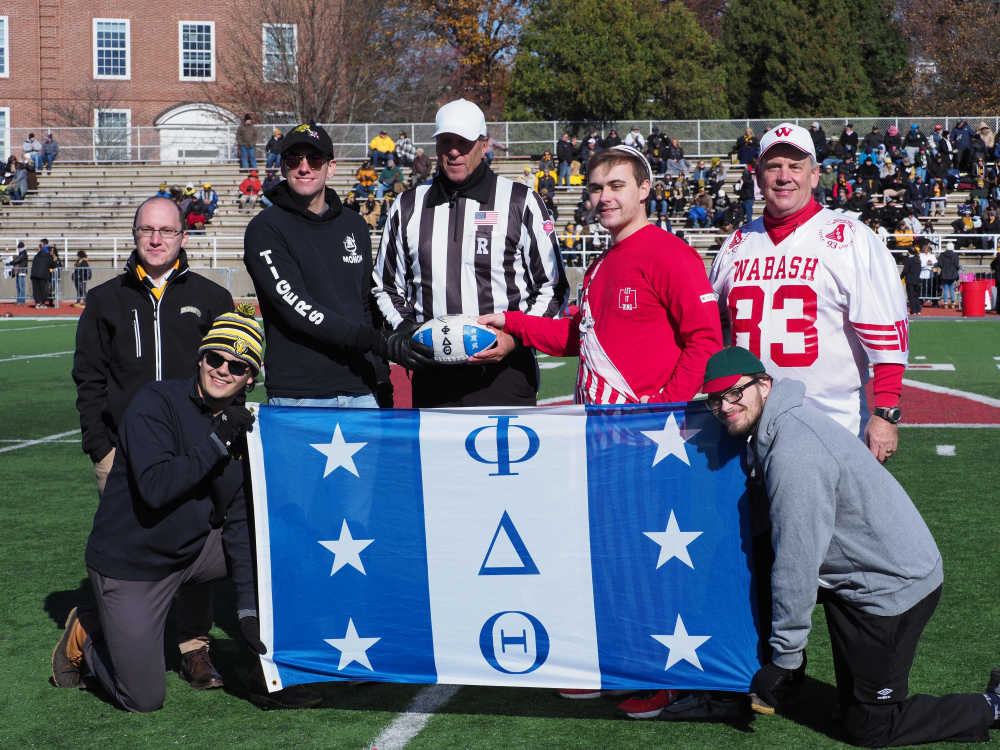 Members of Phi Delta Theta fraternity from chapters at DePauw University and Wabash College presented the game ball to officials prior to the start of the 125th Monon Bell Classic on Nov. 10.

The ball was relayed on foot and bike between the two campuses in advance of the historic football game to raise awareness about amyotrophic lateral sclerosis (ALS).

“The idea is to raise both awareness and funds for our International Fraternity charity The Live Like Lou Foundation,” DePauw chapter President Drew Morrison ’19 said. “In addition, it helps to set a tone for the respect we have for the event and the competition.”

ALS – commonly known as “Lou Gehrig’s Disease” – is a progressive neurodegenerative disease that attacks nerve cells and pathways in the brain and spinal cord. As many as 30,000 Americans may currently be affected by ALS.

The Monon Bell Classic, first held in 1890, is staged annually between DePauw and Wabash – two stalwarts of NCAA Division III athletics and both highly regarded national liberal arts colleges. The trophy is an old locomotive bell donated by the Monon Railroad Line which once had been in service between the two cities.

DePauw Phi Delts transported the ball halfway between the two campuses via Little 5 bike team members, then the team of Wabash Phi Delts brought the ball the rest of the way to Crawfordsville.

“This is the sixth consecutive year for the event,” shared alumni adviser C.J. Johnston ’83. “This year, we’ll eclipse $37,000 in donations toward ALS research. We are grateful to DePauw Athletic Director Stevie Baker-Watson for her support of this very positive event.”