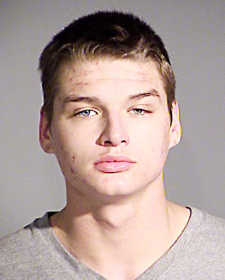 The fourth perpetrator of an April 2017 home invasion in Madison Township will not go to trial.

Meeting for a final pre-trial conference with Judge Matthew Headley, Bookwalter, public defender Melinda Jackman-Hanlin and Randolph agreed to the terms of a plea agreement.

With an agreement in place, Randolph will not go to trial on Monday, Dec. 17, as had been scheduled.

While Randolph’s sentence will not be official until he appears before Headley for sentencing on Jan. 15, 2019, Bookwalter said the agreement is for a 20-year sentence — 10 years in the custody of the Department of Correction and 10 on probation.

“I was able to speak to Randolph for the first time,” Bookwalter said, adding that he told Randolph, who was 19 at the time of the crime, he has a choice to make regarding the rest of his life.

Depending on the outcome of Level 5 felony burglary cases in Shelby and Parke counties, Randolph could still be a relatively young man when he leaves prison.

“He said he wants to be an electrician,” Bookwalter said.

The veteran prosecutor told the Banner Graphic there were a number of reasons that a plea in this case was advantageous for his office as well as for the defendant.

“Our reasoning was, this was my weakest case,” Bookwalter said. “We had telephone pinging on the other guys that placed them in the area. He didn’t have a phone.”

In fact, Bookwalter revealed in one of the other trials that Randolph purchased a phone on the Monday morning following the crime. One of the first things activities on the new phone was a web search about “Putnam County home invasion.”

However this evidence, much like Randolph being found with some of the stolen items, was circumstantial.

Bookwalter also said that he thought Randolph was heavily influenced by the three older men.

“He was 19 at the time,” Bookwalter said. “My take is Reese, Maybaum and Cherry were the really bad actors and he was a kid along for the ride.”

Bookwalter also cited his concern for the victims, whom he didn’t want to place on the witness stand for a third time, and for potential jurors, who would be none to be happy to be sitting through a three-day trial a week before Christmas.

Two of the four men charged in the case, Justin Cherry and Paul Reese Jr., went to trial earlier this year and were found guilty of all nine felonies, with each receiving 72-year sentences.

Charles Maybaum agreed to plead guilty to three felonies — Level 2 felony burglary with a deadly weapon and two counts of Level 3 felony burglary — and will face sentencing on Jan. 10.

During the April 2, 2017 incident, four masked men held Pat and Terry McCarter at gunpoint for close to an hour while they ransacked their home. The men made off with prescriptions, checks, jewelry, a rifle, a handgun, a purse, wallet and cash and even the McCarters’ Buick Rendezvous.

Additionally, one of the men struck Terry McCarter in the temple area with the butt of either a rifle or shotgun.