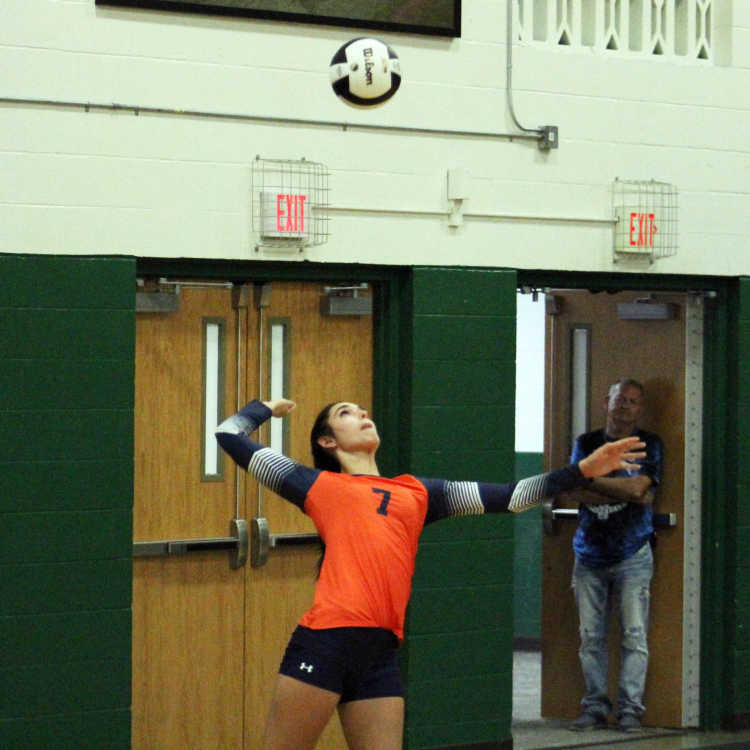 Kinzey Young is a senior at North Putnam and participates in volleyball and basketball.

Banner Graphic: How important are sports to you, and what have you learned from them?

Kinzey Young: “I love sports. I have played volleyball and basketball since elementary school. I like volleyball the best. I have developed leadership through sports, especially this year being a senior. Our teams don’t have a lot of seniors. I have also developed better communication on the court, as well as making friends and good relationships.”

BG: Your volleyball team had a much better record than in your first three years. What led to that?

KY: “Volleyball was the best this year. We went from barely winning anything to winning 14 matches this year. Our team bonded really well together this year, from freshmen to seniors. It has really helped us.”

BG: Basketball has also been better this year with a 5-6 record so far. Talk about that improvement also.

KY: “Our season has gone better this year, and it’s a lot better than the other years also. We’re doing really well. I think I’ve played better this year. Like in this game [against Indianapolis International on Monday], we used to be the team that got beaten by a lot of points. It’s really great to be on top in games like that. Our Sullivan game was really awesome last week. We were a completely different team, especially against them. We played so hard and so aggressive, and we got the win. It was awesome.”

BG: What’s the most embarrassing thing that has happened to you in sports?

KY: “I would have to say tripping over the lines in basketball when nobody’s even around you. I’ve done that a few times.”

BG: What else do you do at school besides things involving sports:

KY: “I’m in National Honor Society. I used to be in Key Club and Student Council, but I’m not in those this year.”

BG: What are your favorites in movies, TV and music?

BG: What is something you have never done before that you would like to do someday?

KY: “I love to travel, and I would like to go out of the country. I would love to go somewhere warm like Costa Rica or somewhere like that.”

BG: What is your biggest fear?

KY: “Heights. I am very scared of being up high.”

BG: What are your favorite and least favorite foods?

BG: Do you have any pets?

KY: “I have one dog at my mom’s house. Her name is Minnie, and she’s a black Labrador. At my dad’s, I have two Yorkies and a cat.”

BG: If your house was on fire, and all living things were already out, what is one thing you would go back and get?

KY: “I would definitely go back and get my great-grandmother’s jewelry box. That’s something that I will keep forever.”

BG: If you were to describe your personality in one word, what would that word be and why?

KY: “Friendly. I like to be friends with everybody, and I don’t want people to not like me.”

BG: What has been your favorite place to visit?

KY: “I went to St. Thomas in the Virgin Islands. The water was really clear. We went snorkeling on a big boat in the middle of the ocean. We dove in and saw sea turtles. It was great.”

BG: How important is support from your family and classmates to your success?

KY: “My mom and dad are at every single game. It’s awesome. They always support me, and tell me I’m doing really well even if I’m not. They tell me what I need to do better. My friends are always there too. They are like family and they do the same things. Everybody doesn’t have people to support them.”

BG: Describe your overall school experience, both academically and athletically.

KY: “I like the smallness of the school, and I like knowing everybody. I would not want to be at a big school. It’s been good here, and I’ve had good teachers and classes.”

BG: What are your plans for after high school, and what career are you headed toward?

KY: “I am going to attend Trine University and play volleyball. I’m going to major in biology, and then heading to dental school to hopefully become a dentist. Both of my parents went there, and I kind of grew up there. It’s smaller, and I like that about it. I wouldn’t want to go from a small high school to a huge college.”

BG: Is it difficult to keep up with your school work being an athlete?

KY: “This year it hasn’t been too bad. I have a lot fewer classes than the past several years, and one of them is a study hall where I can get my work done for the other classes. It was tough to balance seven different classes the past few years.”

BG: After college, do you have plans to live somewhere in the mountains or on the beach, or do you want to live around here?

KY: “I definitely don’t want to go too far. I think I’ll wind up somewhere around Trine or Indiana University [after dental school].”

BG: Do you think high school has gone fast, and are you going to miss it?

KY: “These four years have gone really fast. It doesn’t seem that long ago that I was a freshman. I’ll come back a lot. I have two siblings [Ruby in third grade and Max in kindergarten]. Ruby is tall, but Max is a little guy. He’ll get bigger. I’m sure they’ll play sports. I was little when I was in elementary school.”