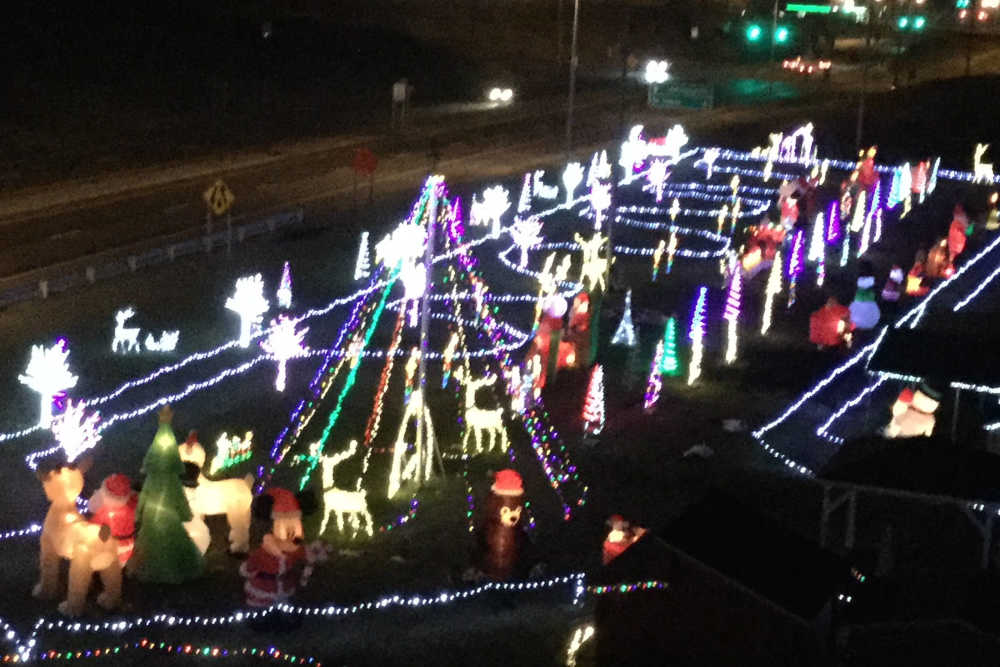 An overhead shot of the display as it is lit up at night. The attraction has grown every year since the first one was staged in 2009.
Courtesy photo

CLOVERDALE -- Decorating for the holidays can be an arduous task for many. Hanging lights and setting up plastic snowmen, and just making sure it all stays together, incurs taking time and assuming a few unmitigated risks.

But for one Cloverdale military veteran, the annual task is a labor of love. It also manifests as part of a passion in spreading the Christmas spirit in his hometown.

That commitment has been the impetus behind the colorful display on U.S. 231 in front of RTM Unique Country Gifts and Garden Shop. Every December since 2009, the myriad of inflatables and countless bulbs of lights have greeted drivers coming to and from Cloverdale. 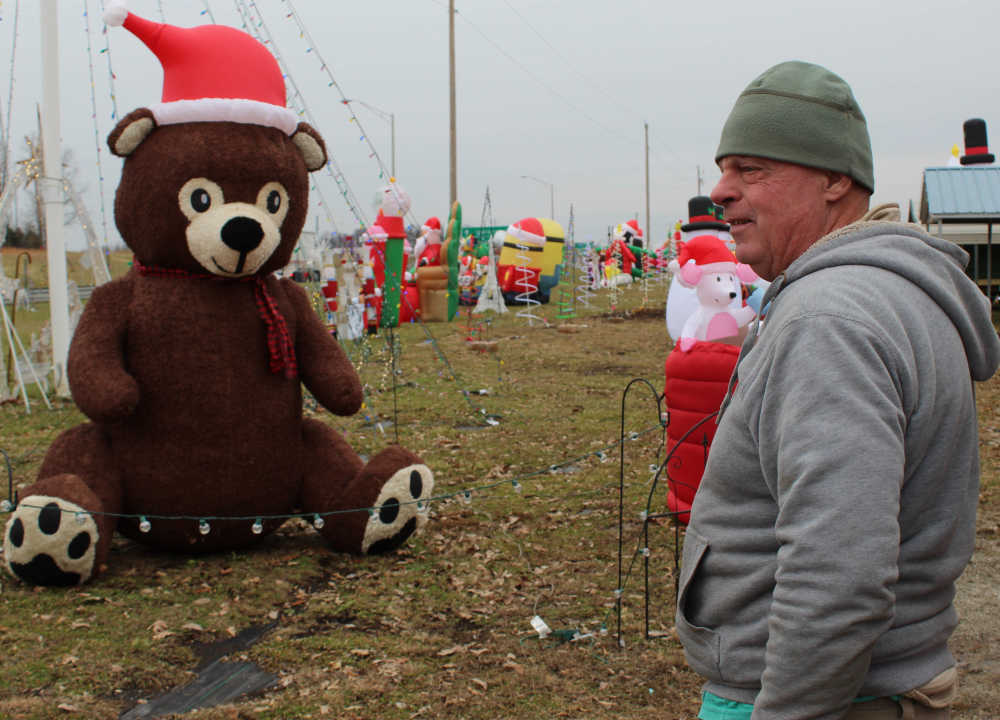 Mike Price checks on an inflatable during a daytime inspection of the display Thursday morning.
Banner Graphic/Brand Selvia

In a new twist, this year is the first time that the public can walk through the display. This is a new effort by RTM’s co-owner Mike Price to involve visitors and the community in making spirits even more bright.

Price, as a 30-year veteran, has seen some action and been in many kinds of stressful situations. He completed his last tour in Iraq and Kuwait from 2008 to 2009 as a logistics point man. That does not encapsulate all he has been able to do.

“I’ve got 30 years of MOSs (military occupation codes) under my belt,” he said. To put it a little more colloquially, this experience means that Price was, and is, more than a one-trick pony. So much so that when this reporter tripped over some wiring, he knew how he could help.

Though he acquired these skills from years of service to our country, he acknowledged what may seem the most obvious difficulty being away on duty. It was hard for him to be separated from his family, especially around the holiday season.

“The military tries to help make the holidays easier on us and our families,” Price said, “but it’s good to be home to focus on our families more and celebrate together as a family.”

It was this desire that inspired him to further develop his store, originally called Retired Military Tree and Ground, after he returned from the Middle East. The idea for the display became a small reality that December in 2009.

It was modest to begin with. Price related that the first display was only 160 feet long and 20 feet deep, sprinkled with a few inflatables and other random decorations. While it was nowhere as big as it is now, the effort still met the same goal.

“I’ve always decorated for Christmas,” Price said as he sat inside the store. “My kids and my wife love the holiday spirit when we do it at home. So we thought we would bring that out to the community.”

Vicki, his wife of eight years, and others encouraged Price to build upon the display. It has now grown into quite the spectacle.

The display now features about 400 individual pieces with approximately 300,000 lights illuminating the entire space. Ten thousand of those lights shine in a 50-foot tree at the entrance to the store. The walking path is roughly half-a-mile in length, with niches where visitors can stop to take pictures.

Price’s attention to detail on some parts is subtle. A silhouette nativity scene has the Three Magi wrapped with multi-colored lights to represent their wealth, while Mary, Joseph, the Infant Jesus and an angel are accented by white lights representing purity. In one inflatable scene, the Grinch waits for Santa delivering Christmas trees.

The display also features the Elf House where visitors can warm up with a cup of hot chocolate at the end of the tour.

Though new ideas have continuously been incorporated into the space, Price said he has no set placement or plan for the display in any given year. Essentially, the layout just comes to him in the moment.

“I have no blueprint; it’s all in my mind,” he said. “I try to see how it can be done and then go from there. It really is ‘by guess, by golly’ when putting it together.”

Altogether, Price, one employee and a volunteer have devoted about 640 man-hours to put up the display. But that commitment has all been more than worth the effort. Price also has helped promote the holiday spirit in Cloverdale by volunteering his time to organize displays at the local park.

“We do it for the community, and I think that more of the Christmas spirit has come back to Cloverdale each year,” he said. “People have always encouraged us to do the display each year, so we have kept it going.”

The display works in conjunction with how the Prices run their decidedly mom-and-pop store. As the theme changes with the seasons, people have come back because of its uniqueness and fair prices, as well as the Prices’ commitment to others.

“People come because of the friendships we’ve created,” Mike said. “That is reflected in the display. We’re unique, and it gives people something to see and feel good about.”

Approximately 400 people have gone through the display so far this year, Price said, adding that many more are always welcome. There is no price for admission, but donations are very much appreciated to help offset the display’s electrical costs.

The display will open to visitors this Friday and Saturday evening at 5:30 p.m. and close at approximately 8:30 p.m. The Prices will also tentatively open the space on the evenings of Dec. 21 and 22 before the Christmas week, weather permitting.