Thursday night -- less than two weeks before Christmas -- Greencastle resident Malcolm Pilkin was in the City Council audience, fixated on what was unfolding at the City Hall podium. His wife, seated at his side, wiped back tears, knowing his presence was her present.

For without quick responses of three Greencastle City Police officers on Thanksgiving Day, Pilkin might not have even made it through to see the turkey carved, let alone the tree trimmed. And the holidays certainly would have taken on new meaning in the Pilkin family. 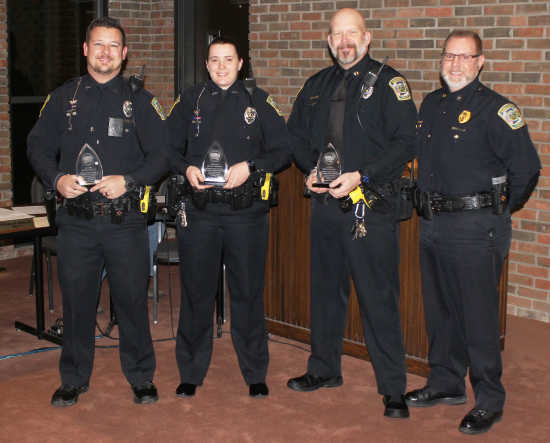 The incident of interest began to unfold in the early morning hours of Thanksgiving Day (Nov. 22), Police Chief Tom Sutherlin said in reporting that GPD officers, along with other emergency services personnel, were dispatched to 864 N. Jackson St., "where an individual was reported on the floor, unresponsive and not breathing."

Capt. Charles Inman and Officers Zach Rhine and Elsiana Crosby were the first to arrive on the scene, a couple blocks north of GPD. There they soon learned the person on the floor was Malcolm Pilkin, who works as a crossing guard for the Greencastle Police Department.

One shock with the AED, along with continued CPR and Pilkin began breathing on his own, Sutherlin told the City Council and an large audience of fellow officers and family members of Inman, Crosby and Rhine.

An AED is a portable defibrillator used to restart someone's heart in the event of sudden cardiac arrest. GPD is now armed with five units, while the Greencastle Fire Department is equipped with a new pair of the lifesaving devices, thanks to a recent purchase of 10 AEDs by the city (which also acquired them for City Hall, the Water Department and City Garage).

For GPD, one is housed at the station, while four of the devices went into the cars of shift supervisors -- Capt. Inman included.

Thanks to its use, an alert Pilkin was subsequently transported to Putnam County Hospital via Operation Life ambulance.

"Once at the hospital, Malcolm Pilkin was sitting up and speaking on his own," the chief said, noting that the Greencastle man was later transferred to St. Vincent Hospital at Indianapolis.

Sutherlin explained that in a sudden cardiac arrest, survivability reduces by 10 percent with every minute of delay in care.

"With this in mind, Capt. Inman, Officer Rhine and Officer Crosby took quick action in administering CPR and deploying the AED," he said. 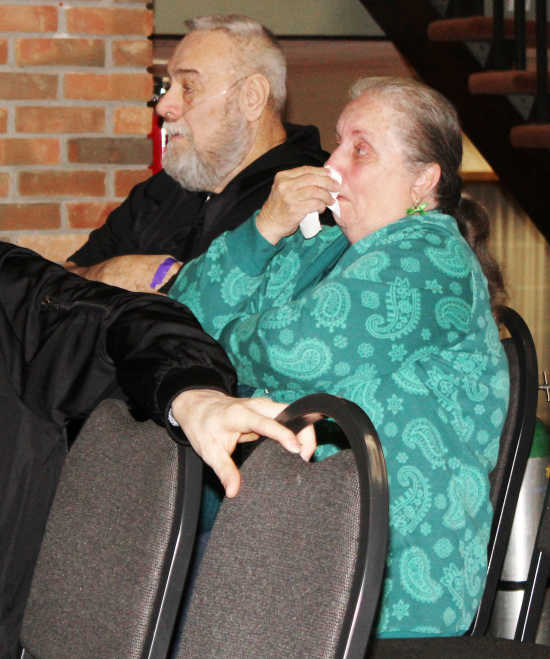 Malcolm Pilkin and his wife look on from the City Hall audience Thursday night.

An obvious example of the city's faith in its AED purchase is paying off.

"The Council made the investment in the AEDs," Mayor Bill Dory noted, "and this is exactly why that investment was so important and well worth it."

"This is also a tribute to the training these guys got and how they carry it out," he said. "That's important when we allocate those training dollars."

Chief Sutherlin thanked the officers' family members and fellow officers for their support in recognizing the trio.

"We take these things very seriously," he said. "A lot of their fellow officers and co-workers are here tonight to see them recognized, and I appreciate them taking their time tonight to come out here, too."

As further proof of the impact of the officers' efforts, Dr. Anthony Heavin called the Greencastle Police Department to talk with Chief Sutherlin about the actions of his three officers.

"Dr. Heavin stated that without a doubt the quick actions of these three officers is what saved Malcolm Pilkin's life," Sutherlin said.

Presenting each officer with an award Thursday night in recognition of their actions, Chief Sutherlin called upon the mayor, City Council and the City Hall audience to assist in applauding the officers to recognize their life-saving actions on Thanksgiving Day. A standing ovation followed.

As did a few more tears.

"Their professionalism, training and ability to remain calm under a very stressful and emergent situation," Chief Sutherlin suggested, "has given Malcolm Pilkin more time to spend with his family here in our community."

Not to mention some much happier holidays.