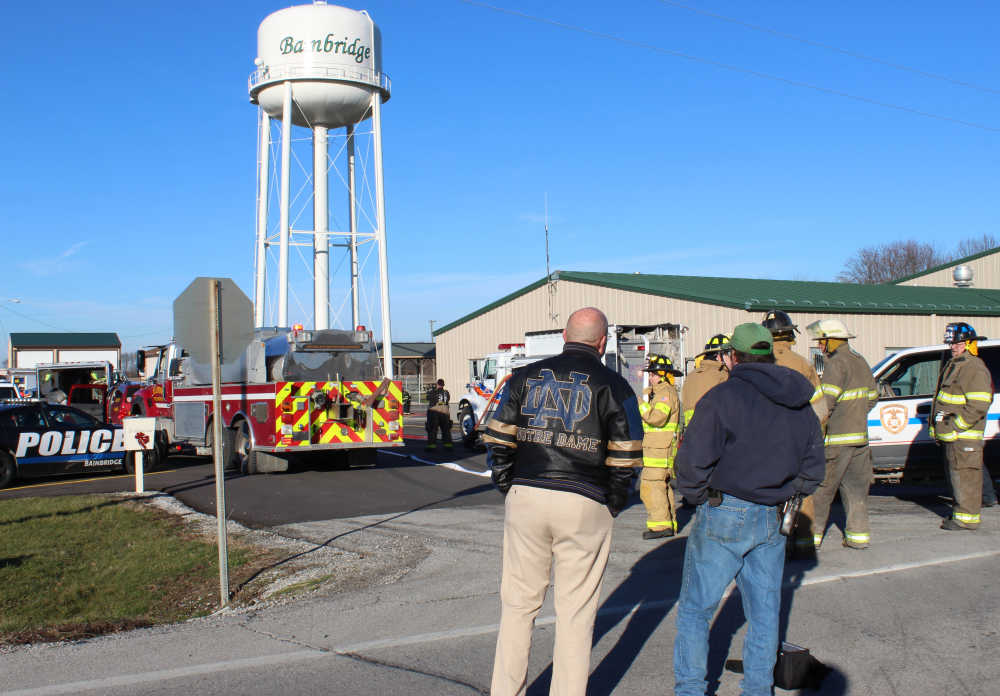 BAINBRIDGE -- A serious chemical leak that occurred Sunday in Bainbridge is now being assessed after town officials and first responders worked for approximately six hours to contain it.

At about 1:39 p.m. Sunday, the Bainbridge Fire Department was toned out to a hazmat call from municipal utilities employees, who reported that a chlorine leak had occurred near Bainbridge Town Hall.

Bainbridge units quickly arrived at the facility to find some were being exposed to the chemical. According to Bainbridge Fire Chief Kevin Thorson, two BPD firefighters and one Bainbridge employee were the three reported to have come in contact with the chlorine. They were treated and then later released.

Hazmat teams from Greencastle arrived at approximately 3 p.m. after the leak was being addressed. The Banner Graphic arrived shortly thereafter to acquire information on the situation.

After GFD’s hazmat team could not completely seal the leak, the hazmat team from the Avon Fire Department arrived at the Town Hall at about 7:30 p.m.

Putnam County Emergency Management Director Tom Helmer, who was on the scene, related that about 150 to 200 people east of the Town Hall on Main Street and north of U.S. 36 were evacuated from their homes and businesses.

The department advised through its Facebook page that anyone who was experiencing headaches, difficulty breathing and sore throat should seek medical attention. Thorson said that some came to the fire department to be checked out.

Helmer said at the time the Indiana Department of Homeland Security had been notified of the issue, and that the company that installed the tank where the leak formed was contacted.

Helmer also related on the ground that no other damage had been sustained, and that the health risk was being mitigated due to the winds which had picked up following the leak.

According to BFD’s Facebook updates, first responders were still on the scene at 8:20 p.m. trying to contain the leak, which was described as “very small.”

The Bainbridge Fire Department announced online at 9 p.m. that residents who had been evacuated could return to their homes.

However, Thorson related to the Banner Graphic Monday morning that first responders had been toned out again for the leak. He also said the company that installed the tank was scheduled to arrive sometime yesterday to assess the situation.

Helmer provided Monday morning also that the hazmat team from the Avon Fire Department was back at the site. Thorson also said Monday evening that the leak had been capped, and that the damaged tank was removed and taken away.

It is still unclear what caused the leak, and it is thus assumed to still be under investigation as of press time.