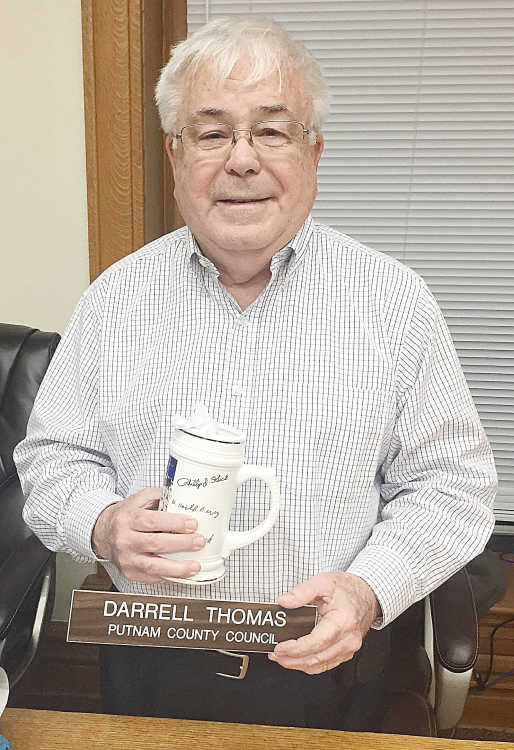 In recognition of 16 years on the Putnam County Council, Darrel Thomas accepts two tokens of his colleagues’ support — a Putnam County Courthouse stein signed by the other six members and the council nameplate that bears his name.
Courtesy photo

Does 16 years on the Putnam County Council sound like a long time?

Try 46 years of serving the people of Putnam County in some capacity.

Having reached both of these impressive numbers, Putnam County Council President Darrel Thomas presided over his final meeting on Tuesday night.

The councilman announced about a year ago that he would not seek a fifth term in service of District 3, but has remained active in his final year, continuing as council president.

“It’s a dirty job but somebody’s got to do it,” Thomas said of his nine years as president. “I took the road that the president or chairman is not supposed to vote unless they need to break a tie. I think I only voted two or three times, which was not a really good representation of my constituency.”

The exit of Thomas leaves the council with a task it hasn’t had very often over the years — choosing a new leader. Before Thomas served the last nine years, retired councilman Mitch Proctor served an astounding 15 years chairing the board.

Whomever is chosen, he or she can probably look forward to a lot more phone calls.

“It’s an interesting experience. The only negative of the whole thing is, when you’re the president and you live in Greencastle, you get all the phone calls.”

That included not only constituents, but also county employees who “still called me for more than advice sometimes. They wanted me to make the decision sometimes and that’s not within my power.”

Not that Thomas views his time in service of the county in a negative light. Before getting into politics, he spent 30 years working for Purdue Extension-Putnam County, coming to Greencastle in 1972 and retiring as county Extension director in 2002.

The Terre Haute native and Indiana State University graduate actually started his Extension career in 1968 with a year in Fountain County.

“Then Uncle Sam decided he needed me more and I went to Vietnam with the Navy,” Thomas recalls.

Four years later, he found himself in Greencastle, a place he has stayed ever since.

“I was county Extension director for a long time,” he said. “I always thought the next step up was politics.”

And while his aspirations to serve the county were serious, Thomas’ first political run started with a bit of a joke.

“Bobby Albright, who was on the council at the time, brought something in to the Extension office from his wife,” Thomas said. “I poked him on the shoulder and said, ‘I’m going for your job.’”

A little surprised at first, Albright admitted he was thinking of hanging it up. When Albright later announced he would not run, Thomas had a real decision to make.

“Sure enough, he didn’t run again and I was left on the hook to do what I said,” Thomas said.

The county council is often a thankless job. As the fiscal body of the county, it is often the council’s job to say no to what might otherwise look like great ideas.

“There’s just some things you can’t do because of restrictions from Indianapolis and other places,” Thomas said. “If we had a big bucket of gold coins, we probably still couldn’t do everything we need to do.”

All the same, Thomas has done his best to listen to constituents, knowing one hot button issue is going to come up again and again.

“Their main concerns over the years has been roads, and rightly so,” he said.

While he believes infrastructure spending is now where it needs to be, the county remains behind the eight ball following too many years of neglect by the state.

“The governor and legislature have given us more money than ever before to work on roads,” Thomas said, “but it was so long in coming that we’re never going to catch up.”

Thomas also regrets that limited funds don’t allow the county council and county commissioners to reward employees the way they would like. While the county doesn’t really employ any more people than it did 16 years ago, other costs have gone up and up, driving up payroll costs even as employees see few raises.

“It’s the infrastructure things that have changed, insurance being the big one,” Thomas said. “Unfortunately, we have not been able to reward our employees for their work the way we really should. Every once in a while, we’re able to find a ray of sunshine to reward them. That’s going to be an ongoing concern.

“Sometimes the only way you can do what you need to do is to raise taxes. There’s not a person on the council who wants to raise taxes, but sometimes it has to be done.”

Retired Putnam County sheriff’s Deputy Danny Wallace will replace Thomas in the District 3 seat. The council will choose Thomas’ replacement as president during its next regular session at 6 p.m. on Tuesday, Jan. 15.