The long saga that began with an April 2017 home invasion and robbery is nearly over.

Paul Reese Jr., 30, and Justin Cherry, 29, went to trial separately and were each found guilty of nine felonies. One day both men were handed their long sentences in early August, Maybaum chose not to take his chances in front of a jury. 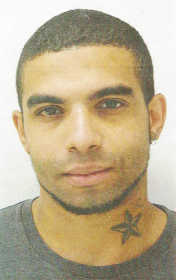 Instead, he entered guilty pleas to three of the nine counts: Level 2 felony burglary with a deadly weapon and two counts of Level 3 felony burglary.

Level 2 felonies carry a sentencing range of 10-30 years, while Level 3 felonies can range from 3-16.

That left only the Thursday-morning proceedings before Judge Matthew Headley in Putnam Circuit Court.

However, Maybaum's legal woes are far from over.

He still faces seven felonies (the most serious of which is Level 2 felony burglary) and one misdemeanor in Owen County for a similar crime to the one in Putnam County. Reese is a co-defendant in that case as well.

"He's back on the train, heading to another county," Putnam County Prosecutor Tim Bookwalter said.

During the April 2, 2017 incident, four masked men held a Madison Township couple at gunpoint for close to an hour while they ransacked their home. The men made off with prescriptions, checks, jewelry, a rifle, a handgun, a purse, wallet and cash and even a Buick Rendezvous.

Additionally, one of the men struck the husband in the temple area with the butt of either a rifle or shotgun.

Having gone through lengthy trials for the first two men, Bookwalter has expressed his desire not to put the victims through testifying again.

The fourth man, 21-year-old Daltyn Randolph of Plainfield, agreed last month to plead guilty to Level 2 burglary with a deadly weapon. In turn, the other eight charges against Randolph were dropped.

With the possible exception of appeals by Cherry and Reese, Bookwalter and his office can close the book on this saga next week with Randolph's sentencing hearing.

Randolph will appear before Judge Headley on Tuesday, Jan. 15 for sentencing.

The agreement before Headley is for a 20-year sentence -- 10 years in the custody of the Department of Correction and 10 on probation.