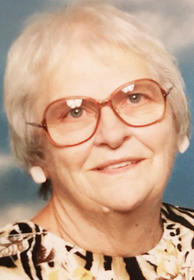 Stella attended many Baptist churches in the area. Her husband, Junior was a Baptist minister in Eminence.

She was a caretaker for some members of her family and her husband.

She was a member of the Order of Eastern Star in Crawfordsville and worked at The Indiana Baptist Assembly at Cataract Lake.

Stella was manager of housekeeping in Crawfordsville Hospital.

Stella was preceded in death by her parents, Brack and Jane Deaton; her loving husband of 54 years, Junior Hammons; a son, Ronald Hammons; a granddaughter, Clorissa Taylor; a brother, J.B. Deaton, and a sister, Juanita Benzing.

Funeral services will be conducted at 1 p.m. Saturday, Jan. 19 at Schoppenhorst Funeral Home, 301 E. 8th St., Clay City, with Pastor James Walters officiating. Burial will in Lebanon Cemetery. Visitation is scheduled from 11 a.m. to 1 p.m. Saturday in the funeral home.

To light a candle in her memory, visit: www.frenchfuneralhome.com.