CLOVERDALE -- In its first meeting of the spring semester, the Cloverdale School Board met with a packed room as it swore in three members and conducted its yearly organization. Board members also heard input on a new graduation track.

Before it addressed those issues, the board swore in Vivian Whitaker, Duane Huge and Arvel Hinton as representatives from the Cloverdale, Taylor and Jennings townships (the latter two in Owen County) respectively. All three ran unopposed in the recent elections, with Hinton taking his seat last July to fill a vacancy.

Whitaker was then appointed to continue serving as president, while Katrina Lewis was named as vice president and Donna Fidler as secretary. Mendy Shrout and Lynn Lotz were also instated as treasurer and deputy treasurer. The board also retained Michelle Cooper from the law firm of Lewis and Kappes as its corporation attorney. 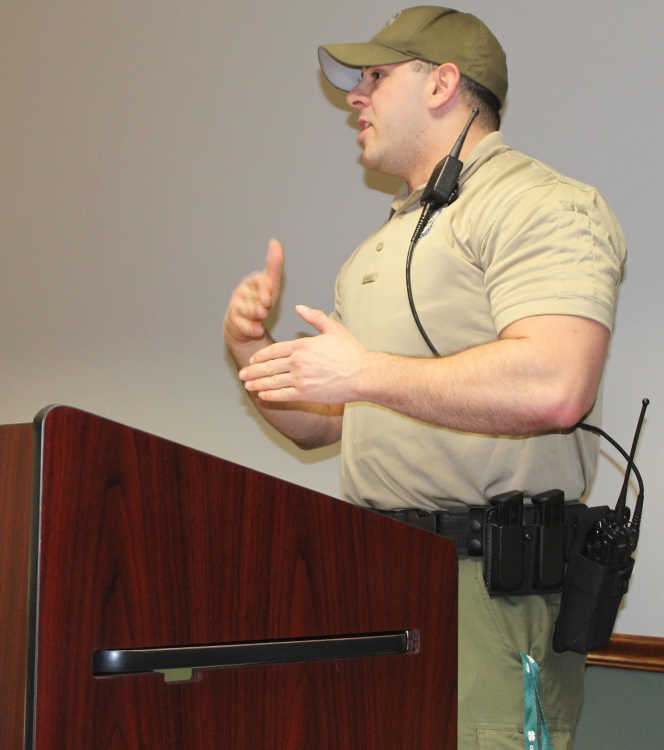 Cloverdale Schools’ new student resource officer Tony Casada speaks about his background and the impact he hopes to have with students and staff.
Banner Graphic/Brand Selvia

After these items, the board publicly introduced Cloverdale Schools’ new student resource officer (SRO) Tony Casada from the Cloverdale Police Department. Casada has been with the force for approximately five months, but has a background in law enforcement as a military policeman and a security officer with the Pinkerton agency. Casada began his duties at Cloverdale at the beginning of this month, and it was apparent he had already made an impact.

“I think it’s a pretty good thing that he had a smile on his face before 8 a.m. on Friday,” Whitaker laughed.

Board member JaceAnn Troutt echoed this sentiment when she said that her son at Cloverdale High School liked having Casada interacting with students.

The board then heard a synopsis by CHS Principal Sonny Stoltz on behalf of approving the burgeoning Graduation Pathways program. The new requirement is being implemented through recent state legislation to help high school students who have been unable to pass the ISTEP+ tests graduate.

Graduation Pathways is focused on preparedness in addition to earning a diploma. The track accounts for service, project or work-based experiences, as well as post-secondary readiness for entrance into college, the military or the workforce. The program also puts responsibility on students, who must keep track of what they accomplish.

Though the track will become mandatory starting with the Class of 2023, current high school students can opt into Graduation Pathways if they cannot pass the ISTEP+. Stoltz suggested this was beneficial for some who have struggled, saying that there may be two or three students who are currently “on the border” of not graduating.

“In any school district, there can be about 30 students who struggle through high school to pass the test,” Stoltz said. “We’ve been blessed by the resources we have so that we can be consistent, and so we can get those students the help and guidance they need.”

“The ISTEP+ has been difficult, and it is going away,” he added. “As they continue to develop, we’ll be giving updates on the progress of these projects and what we’re doing to help them meet the requirements.”

Responding to a question posed by Huge about whether students who have passed the Armed Services Vocational Aptitude Battery (ASVAB) needed to test continuously on other exams like the SAT, Stoltz said that he would encourage regular testing as a kind of safety net.

“The ASVAB does create a pathway, but they need to have the option of the SAT so we know that they might be covered if they go that route,” he added. “We need them to be prepared, and we can get them there.”

In a separate vote, the board also approved Kurt Kyle as the varsity head baseball coach at Cloverdale High School, with Joe Mann, Arvel Hinton and Katrina Lewis opposing the motion.

Kyle was at the center of a short controversy after parents voiced concerns about his previous conduct as a coach at the December board meeting. Kyle has coached for more than a decade at Cloverdale Schools in various sports like baseball, football and wrestling.

The board adjourned the regular meeting for a brief session of the CCSC Finance Board to reinstate Whitaker and Fidler as its president and secretary.

Cloverdale Superintendent Greg Linton then provided a recap of CCSC’s income through its interest-bearing checking account, noting that Cloverdale Schools made about $48,000 in 2018. He also said Cloverdale will see more income in the next year due to interest increases, and could see revenue reach up to $85,000.

The next regular school board meeting is scheduled for Monday, Feb. 11 at 7 p.m. in the Arthur L. Johnson Administration Center near Cloverdale High School.