While many a celestial body has been unveiled through the lenses of its rare, antique telescopes, it is McKim Observatory that is a star in its own right.

Surviving isolation, lack of attention and insufficient recognition over its 135-year life on Greencastle’s northeast side, the historic DePauw University observatory is considered not only a local gem but a national treasure, members of the Heritage Preservation Society (HPS) of Putnam County were told during their annual meeting Thursday evening at the Putnam County Museum.

During a presentation titled “Indiana’s First Light: The Story of Our State’s First Observatory,” DePauw Professors Mary Kertzman, Howard Brooks and Alex Komives of the Physics and Astronomy Department shared some of the secrets and historic aspects of McKim, which was built in 1884 on what was then the outskirts of Greencastle. 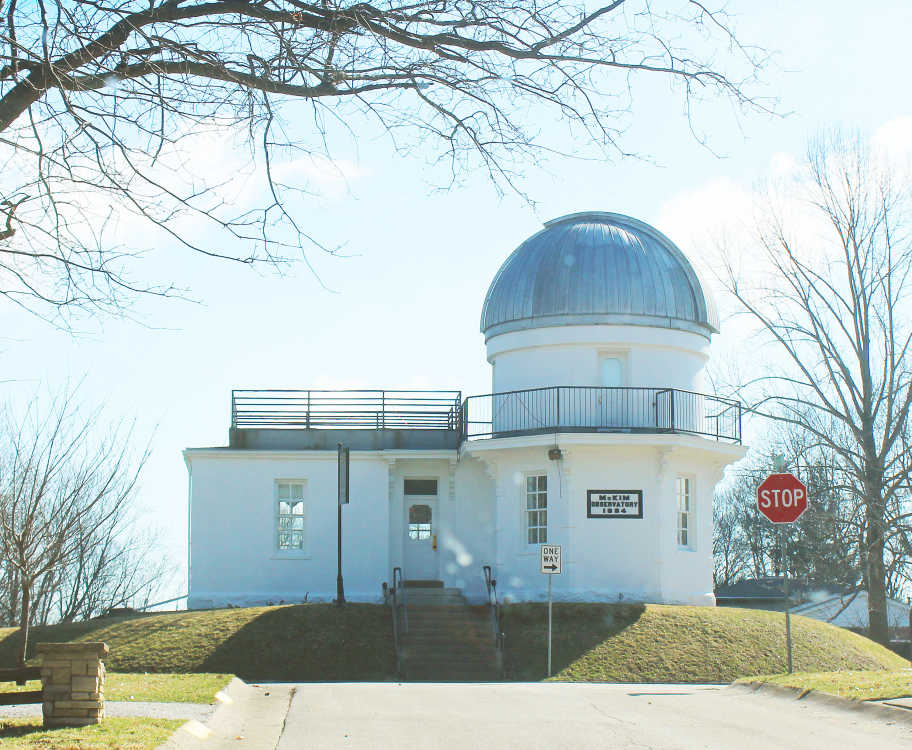 Historic McKim Observatory, built in 1884, is located at DePauw and Highridge avenues on Greencastle’s northeast side.
Banner Graphic/Eric Bernsee

The observatory was built on a portion of 120 acres of farmland acquired from the Durham family, Brooks noted, as thought was being given to relocating the campus -- which was little more than East College and its surroundings at the time -- to Greencastle’s northeast side.

That idea came about, Brooks related, after the DePauw president was rebuffed in an effort to get the City of Greencastle to vacate everything south of Seminary Street to Berry Street (between Indiana and Locust) for a campus development that would have been called -- wait for it -- South Park. Imagine the fun students would have had with that moniker these days.

But the Panic of 1893 -- a serious economic depression that enveloped the United States until 1897 -- caused DePauw to rethink moving its campus, and instead it began selling off property, including land that was developed into the historic Northwood Addition (one of the six local districts now granted status on the National Register, thanks to recent HPS efforts). 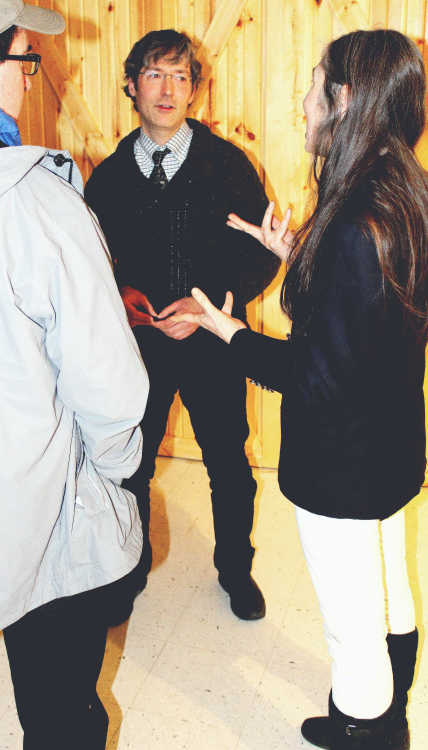 Motivation to construct McKim, Brooks said, came after the existing on-campus observatory -- “that funny thing on top” of East College -- became obsolete. Back then, in 1877, “DePauw didn’t pay much,” Brooks said, “but you could live in your office,” which meant numerous smokestacks extending from the building as those offices were heated via fireplaces. There was soon so much smoke that the sky was obscured and the telescopes rendered useless.

Prior to 1910 when McKim was covered with stucco, the observatory was a brick structure, which Prof. Mary Kertzman dreams is the way it will look again some day.

Kertzman took the 30 HPS annual meeting attendees on a virtual tour of McKim, pointing out “hidden treasures” along the way.

Like the spiral staircase up to the main Clark Telescope.

“I don’t know how typical that is,” she said, “but I think it’s pretty cool.”

So too are the porthole windows that accompany the spiral climb.

Or one door frame strike plate that intriguingly bears celestial signs of the moon and the stars.

“I don’t know how long I’d been in that building,” Kertzman shared, “before I noticed that (and said), ‘Wow, look at that!’”

McKim also houses a rare Bailey’s Astral Lantern, a 19th-century apparatus for viewing and charting the stars and astrological movements, described as “an illustrated panorama of the heavens.”

Most of those Bailey’s instruments “were lost to time,” Kertzman said while offering an expert’s statement that said he was “aware of only one extant lantern -- at McKim Observatory.”

Kertzman also addressed “the mystery of the missing Almucentar,” an instrument for determining astronomic latitude free of leveling problems, that had been given to the university by its creator, S.C. Chandler, and was later displayed at the 1893 Columbian Exposition in Chicago. It was kept within a separate little building on the McKim site.

“We know by 1930 it was gone,” Kertzman said after displaying a photo with the separate building on site. “We have no clue where it went.”

McKim was added to the National Register of Historic Places, Brooks noted during his remarks. That was after it had fallen into some disrepair and was even nearly dismantled.

One of Brooks’ favorite nuggets of information about the observatory was that for at least two years -- 1914-15 -- a six-hole golf course, known as the Greencastle Golf Club, wrapped around McKim. It was not the same golf course, Brooks said, that was later laid out northeast of that area and featured a clubhouse that would later be called Mathena Manor when it was a super club.

Another fun fact, after regular open houses were held from 1885 until World War II, those nocturnal events were canceled, Brooks said. That came when the DePauw president decided students were using the outings to the observatory “as cheap dates.”

Alex Komives addressed the current state of McKim, noting that its telescopes have been used to observe “every planet except Mercury,” along with the moon, lunar eclipses, comets and double stars.

He said he tells his students, “If you haven’t seen Saturn through a telescope, you’re dead to me.”

Showing a stunning moon photo taken through the telescope, Komives said, “If you haven’t seen the moon through a telescope, you really, really need to do that.”

As ongoing maintenance continues to be an issue at McKim, DePauw has sought partners in the quest to keep the building in repair, HPS President Margaret Kenton noted. This past fall, Indiana Landmarks -- in conversation with HPS, DPU President Mark McCoy and Profs. Kertzman and Brooks -- offered to pursue grants to aid the upkeep of McKim. Indiana Landmarks has worked with the college to successfully secure Statewide Significance recognition by the National Park Service for the observatory, making it eligible for certain funding consideration.