Bud Sharp honored for years of service on Election Board 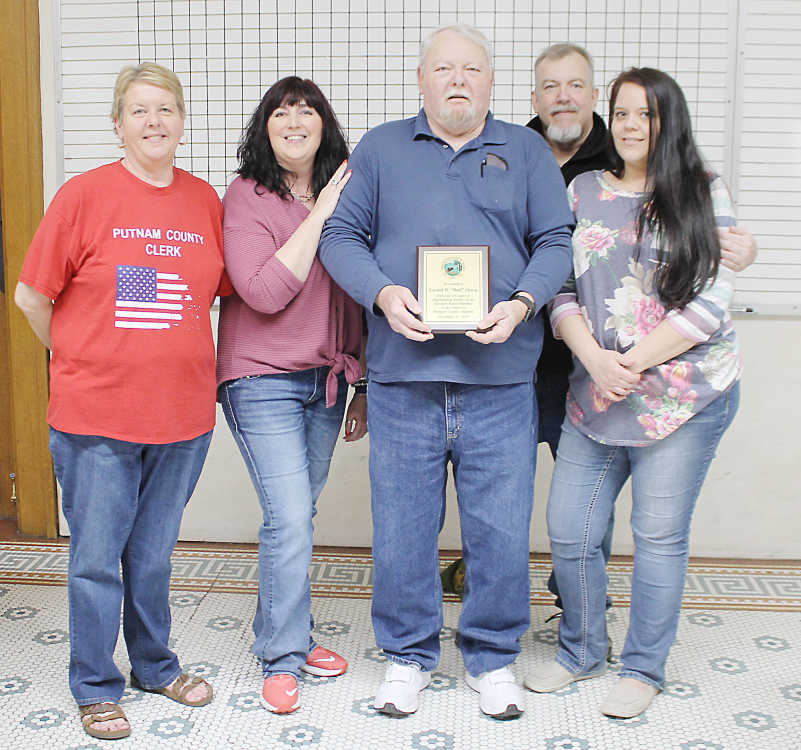 What’s a typical Election Day like for a member the Putnam County Election Board?

There isn’t anything typical about it.

Veteran board members Bud Sharp and Jack Sutton like to joke about sitting on their rear ends and even asking Putnam County Clerk (and third Election Board member) Heather Gilbert to bring cots in for them.

On what Sharp described as a “normal” election day, he would arrive at the courthouse at 4:15 a.m. and wait for calls for problems to solve at various polling places.

In 2016, on the other hand, he left his Washington Township home early and was called to the Putnam County Fairgrounds, then to Wellspring Christian Church.

The list went on and he never made it to the courthouse until 4 p.m.

After 15 years, perhaps it was getting to be a bit much for Sharp.

“The last election took me three days to get over,” Sharp said. “I remember the first election, I was up and going the next day.”

The grind led Sharp to retire from the board, with fellow Democrat June Wolfe taking over at the beginning of 2019.

Wolfe will be the first new Democrat on the board since the early 2000s, when Sharp was approached by Democrat Party Chairman Dave Bohmer and Election Board member George Murphey. After running for office in the 1990s and becoming active in the Democratic Party, the board appointment gave Sharp a different way to be involved.

“They asked and I said yes,” Sharp said. “It let me continue to be very active in politics but not have to run for office and not campaign. I enjoyed campaigning but that is a lot of work if you do it correctly.”

In doing so, he became part of the three-person committee that consists of a Republican appointee (currently Sutton), a Democrat appointee (Sharp until recently and the Putnam County Clerk (Gilbert).

Through the years, Sharp has worked with three clerks, Opal Sutherlin and Marty Watts before Gilbert, and a number of Republican appointees and worked well with them all.

“We just happened to really work well together,” Sharp said. “I’ve had several counterparts over the years and gotten along with all of them.

“I have enjoyed all three clerks in different ways,” he added.

Sutton and Gilbert had nothing but good things to say about Sharp on his way out.

“The reason Bud and I got along is we don’t care about party affiliation,” Sutton said. “We care about what is best for the voters of Putnam County.”

“And you guys did that and I think I had a good team,” Gilbert added.

Sharp was moved by their words.

“That’s good to hear you guys say that because that was always my goal,” Sharp said.

The Election Board has a job that many voters don’t necessarily understand. It is the job that is shared equally by all three members, not simply the clerk as the elected official.

Board members have to proof ballots and run a test election in which they see how the voting and tabulating machines are working. They then have to sign off on their findings and have them certified.

“If these things don’t happen in the right order, in the right timeframe, we can compromise the election,” Gilbert said.

There is also the job of considering if someone has not correctly filed to run for office.

“If someone has inappropriately filed for office,” Sharp said, “we have to make the decision on whether they get to be on the ballot.”

In one case a few years ago, the trio was even called upon to determine if a candidate was fit to run for office.

It was also the Election Board that pushed for vote centers to come into the county, saving the county money by reducing the number of polling places to eight throughout the county.

Even so, there was some pushback, particularly from residents of Russellville and Roachdale, whose closest center is in Bainbridge.

“I understand that Russellville was a little upset about it,” Sharp said.

None of this takes into consideration the high-pressure situations that can arise on Election Day.

These have included solving a power supply problem at the old Putnam County Home, setting the correct time on the voting machines so they would allow people to vote and even having to reroute traffic at the Fairgrounds Community Building because of a paving project.

Mixed in with all these fires they put out, they also have to find time on Election Day to tabulate the absentee ballots.

“Sometimes that takes 30 minutes,” Sharp said. “The last several elections, that’s been most of the day.”

Sharp recalls that in his first year he was told to arrive “early” at 5:30 a.m. before the polls open at 6 a.m., but that wasn’t nearly early enough.

It’s that schedule that has begun to wear on him.

“It’s one of those things that I loved doing the job,” Sharp said. “I told Jack if I couldn’t do that job, I wasn’t going to be in the way.”

Even with the seriousness of the job, it came with some fun too.

“Our other concern was giving the clerk as much grief as possible,” Sutton said.

“And we worked very hard at it,” Sharp added with a laugh.

Sharp’s ability to do the job well and with a sense of humor leaves Wolfe some big shoes to fill.

“You left a hard legacy for someone else to follow,” Gilbert told Sharp.

“I really appreciate the kind words everyone has said,” Sharp said. “I really enjoyed being a part of it.”

Sutton’s words for his colleague were glowing.

“The residents of Putnam County — be they independent, Green Party, Tea Party, Republican, Democrat — should feel blessed that Bud has lent his wisdom to this board for 15 years,” Sutton said.

“It is a privilege to serve the residents of Putnam County, and it is great to have people like this to work with,” Sharp said.