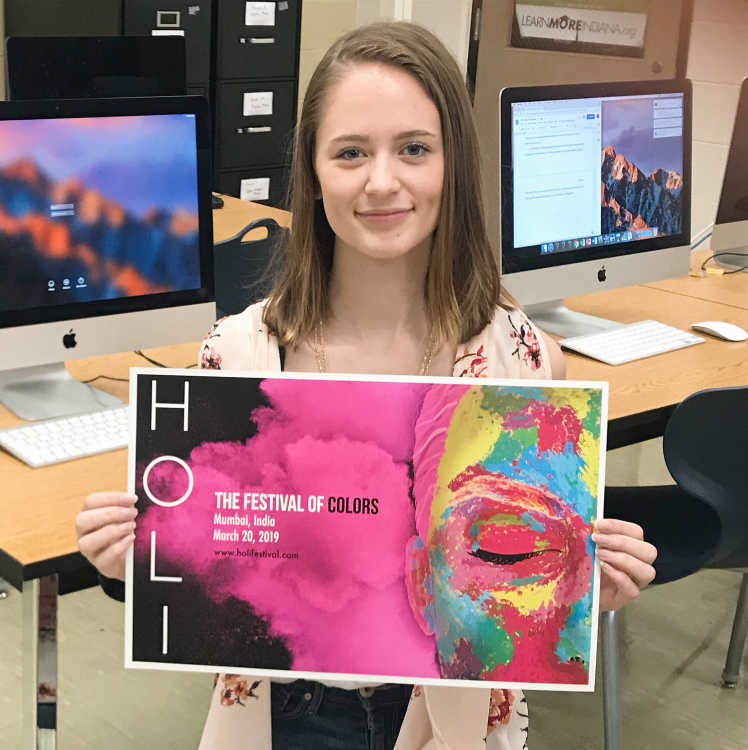 Megan Earley poses with her graphic design highlighting the festival of Holi, which she created in Amanda Kramer’s fine arts class. The colorful poster earned her a National Gold Key in this year’s Scholastic Art and Writing Awards.
Courtesy photo

ROACHDALE -- The art department at North Putnam High School has recently had much to celebrate in the way of student success.

Artwork by 18 students in Sarah Chizum’s and Amanda Kramer’s fine arts classes was honored at a regional competition for the Scholastic Art and Writing Awards earlier this year.

One of four students who earned a Gold Key, the highest honor a student’s work can receive, was then-sophomore Megan Earley. Her graphic design promoting the Hindu festival of Holi, or the Festival of Colors, was not only displayed in Clowes Memorial Hall at Butler University, but was also entered into a national competition judged by some of the nation’s preeminent leaders in the visual and literary arts.

Earley and her teacher Mrs. Kramer learned in April that her poster was to be included in an exhibition showcasing work submitted by students from all over the country. Both also found out that the young artist had earned a National Gold Key. This puts Earley among the ranks of celebrated artists, writers and filmmakers like Andy Warhol, Sylvia Plath and Ken Burns, who also received National Gold Keys.

About 340,000 student works of art and writing were submitted for this year’s competitions, and Earley’s colorful poster was honored as part of the one percent of all the entries which were considered and recognized at the regional and national levels.

Earley’s winning design was created for a project in Kramer’s class. Students had to choose an international festival or event to research and then create a poster promoting it. Earley chose Holi, an annual festival that takes place throughout India marking the arrival of spring. In an email to the Banner Graphic, Kramer said Earley was inspired by the colored powders which are thrown during the celebration.

“Megan is an amazingly talented individual,” Kramer said. “Her creativity and ideas are so inspiring to me, and I always look forward to see what Megan’s solutions are for projects which I assign in class.”

On Earley’s part, earning the award has inspired even greater confidence in her abilities as an artist. The national recognition her poster has received has also indelibly spurred her to consider turning her passion for art and design into a career.

“I have always enjoyed graphic design and art, but never considered pursuing it as a career,” Earley, an incoming junior, wrote to the Banner Graphic. “This award changed my perspective on what I am capable of as an artist. Winning this award made me realize that this is what I would like to do for the rest of my life.”

As to how she uses the tools at her disposal to transform that inspiration into artwork, Earley said she relishes the challenge of discovering and trying out different techniques, especially when it comes to digital design.

“My favorite thing about creating is finding new ways to solve problems within the design software,” Earley noted. “I like to try new uses for design tools, and my favorite software is Adobe Illustrator.”

Earley and Kramer will soon travel to New York City, where she will receive her National Gold Key during a ceremony at Carnegie Hall on June 6. Earley’s poster will be on display there, as well as highlighted on the Scholastic Art and Writing Awards’ website.

Since 1923, the Scholastic Art and Writing Awards have celebrated teen artists and writers from across the nation, and are the oldest and longest-running art and literary awards for students in the United States.