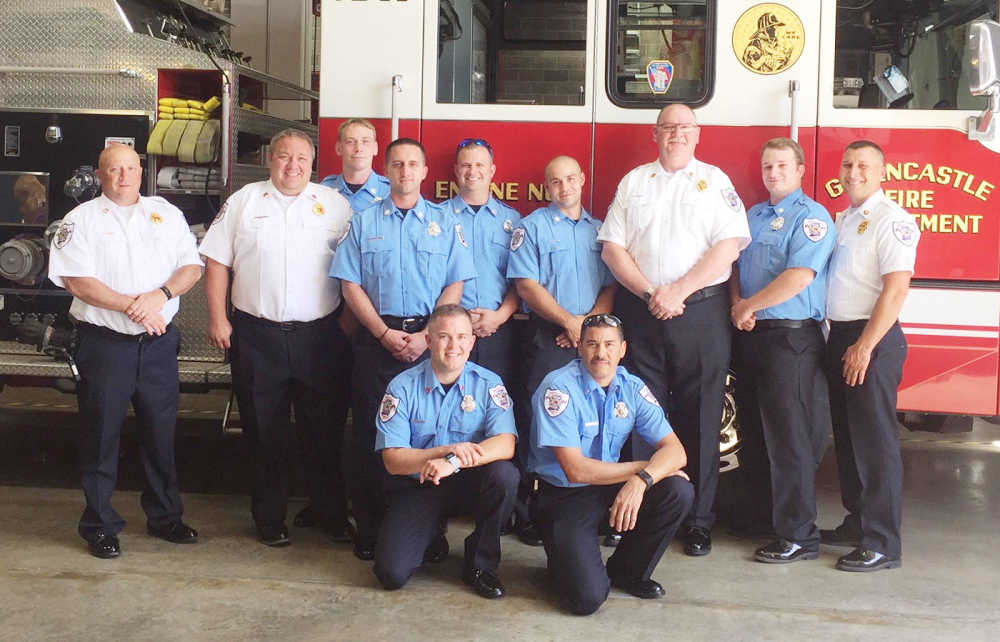 Following a year as probationary members, James Shaw (fourth from right) and Ben Wright (second from right) are officially welcomed to the Greencastle Fire Department by their fellow firefighters.
Courtesy photo

More than a year after they joined the team, two firefighters have been officially a part of the Greencastle Fire Department.

James Shaw and Benjamin Wright were sworn in by Mayor Bill Dory in a to-the-point ceremony inside the bay area of the firehouse on Indiana Street, with Wright’s family and Shaw’s girlfriend Claudia Porter in attendance.

Before he swore in GFD’s newest members, Dory recounted how his late father served as a firefighter, and how the department will receive new upgrades waiting in the wings, such as a new ladder truck.

“We’ve got some good things on the line coming soon,” Dory said as he addressed the group. “We’re excited for what’s ahead for the department, and I’d like to say welcome aboard.”

“These guys have joined a great department,” GFD Fire Chief John Burgess said after Dory. “It’s a brotherhood and a sisterhood. This job can take away a lot of time from family, because we’re 24 hours on.

“Be tolerant of what they do, because they’re going to do good work,” Burgess said especially to Shaw’s girlfriend and Wright’s family.

Both Shaw and Wright joined the Greencastle Fire Department in May of last year. Their swearings in marked the end of their year-long probationary period on the force.

Born in Reelsville and currently living in Bainbridge, Shaw was a reserve firefighter at the Reelsville Volunteer Fire Department from 2013 until this year. Before coming to the Greencastle Fire Department, he served as a dispatcher for the Putnam County Emergency Operations Center.