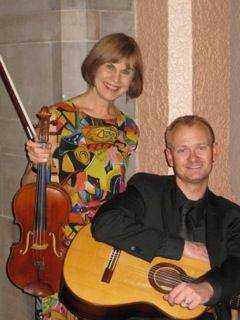 There is no admission charge for the concert held in the sanctuary of Gobin Memorial United Methodist Church.

This week’s concert has been underwritten by a special gift from Linda and Steve Raines of Greencastle.

The festival’s Wednesday evening concerts (and music performances for children in the Summer Enrichment Program, also hosted by Gobin) are underwritten by donations from local individuals and businesses, including Bridges Craft Pizza and Wine Bar (providing intermission refreshments), The Inn at DePauw, Greenburg Accounting and Hillside Farms. The festival also received a grant from the Putnam County Convention and Visitors Bureau and has an endowment through the Putnam County Community Foundation.

Espen Jensen and Donna Lively Clark have been playing together since 2004.

“At that time, very little literature was readily available for guitar and viola,” explains Clark. “This instrumental combination is very lovely, but not very common! Through the years we have both enjoyed being a part of creating a large and varied repertoire for the duo.”

The program on Wednesday evening features some of the pieces brought into existence by the duo.

With 10 strings in play, Jensen and Clark offer a rich and varied repertoire they have developed for this combination. Given two instruments with a similar tonal range, the base and lead lines can be exchanged, leading to arrangements which offer intricate interplay and uncommon tonal beauty. Both musicians are known for their interpretation of 20th-century music and their performances of Latin American music. Fans of this duo find the enthusiasm and expertise of the artists to be what turns a great repertoire into a memorable listening experience.

Donna Lively Clark earned a full scholarship to study at Indiana University’s School of Music under the renowned William Primrose, and has also studied with William Lincer, Georges Janzer and Alan de Veritch. She holds a Bachelor of Music Education from Indiana University and a Master of Music in Viola Performance from Butler University. An active and well-known performer, teacher and clinician, she has served as guest professor of viola at Indiana University and Ball State University, and currently teaches viola and chamber music at Indiana State University. Other significant teaching engagements include the Viola Camp at Pepperdine University; the National String Workshop at the University of Wisconsin-Madison; Butler University; École Saint Trinité in Port-au-Prince, Haiti; and as the director of the Carmel Conservatory of Music’s Summer Chamber Music Camp.

Clark makes her home in Indianapolis, where she performs in the Indianapolis Chamber Orchestra, with various ensembles including Duo Diez and the Lockerbie String Quartet as well as a soloist. She also performs in the Pacific Northwest with the Bellingham Summer Festival Orchestra. As a recipient of a Lilly Foundation Creative Renewal Fellowship, she lived, studied, performed and recorded in Buenos Aires, Argentina. These recordings of both traditional and original works appear on a CD, “Una Viola Porteńa: A Tribute to the Heart and Soul of Argentina,” which is produced on the Centaur label. She is also featured on a classical-jazz fusion CD entitled “Erosonata.”

A native of Norway, Espen Jensen is a recording artist currently living in the United States. He is the winner of several awards, among them First Prize in the 2001 Competition in Performance of Music of Latin America and Spain, as well as First Prize in the Indianapolis Matinee Musicale. In 2002, Jensen released his debut solo CD, the much-acclaimed “Nocturnal Variations.” He soon released his second album, “Elogio de la Danza y la Canción,” featuring music of the Caribbean, Latin America and Spain. In 2006, he completed yet another album, this one featuring premiere recordings of contemporary Norwegian music on the guitar.

Jensen holds the degree of candidatus magisterii (cum laude) earned in 1998 from the University of Agder’s Music Conservatory in Norway. He earned a Master of Music in 2000, as well as a Performer Diploma in 2003, from Indiana University’s School of Music. His guitar instructors included Ernesto Bitetti, Luis Zea, Jan Erik Pettersen and Bengt Martinussen. After finishing his Doctor of Music in Guitar Performance in 2014 and serving as the assistant director of the Latin American Popular Music Ensemble at Indiana University, Jensen became the director of admissions and financial aid at the Jacobs School of Music. He maintains an active concert and composing career as well.