Getting Congress back on track 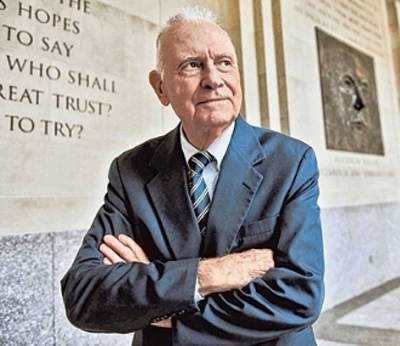 The other day, someone I’ve known for years offered a pointed bit of criticism. “It’s easy for people like you to make long lists of things Congress should do to improve,” he said. “But you know good and well most of them won’t happen. So if you’re really serious, what’s the one most important thing it could do? What does Congress absolutely need to start getting itself back on track?”

He was right. “People like me” — that is, people who comment publicly about all the things Congress gets wrong — often have long laundry lists of fixes, from wringing the influence of special-interest money out of the system to members of different parties spending more time together. But the most important fix? That takes some thinking.

I’ve spent some time on it and have my answer. But you’re not going to like it. What’s critically important for Congress to do? Return to the regular order.

I know, even a lot of wonks don’t know what that means. That’s because it’s a little hard to define precisely. Drawing on the work of congressional scholars Tom Mann and Norm Ornstein, you could think of the regular order as the rules, precedents and norms that have evolved over congressional history to make sure that it treats its members fairly in the course of its work and that it plays its proper role in our scheme of government.

In part, this is about process. You may think of committee hearings, expert testimony, and a fair debate and amendments process as eye-glazing details, but they evolved for a reason: They’re how Congress ensured that a diversity of voices got heard, members got the benefit of the best thinking in the country on difficult issues, and even rank-and-file members had a chance to shape policy.

I put those in the past tense because, of course, mostly they no longer happen. Instead, Congress has gotten into some distressing habits — omnibus bills, weakened committees (especially in the budget process), amendment-free legislating — which all add up to a curtailed process dominated by the leadership. It has limited floor debate, tends to bypass ordinary members and gives disproportionate influence to big donors and lobbyists. It often sidesteps dealing with tough issues. And it’s not unusual for important legislative provisions to be added at the last minute by powerful members without discussion or debate.

The result is the diminished, unproductive Congress we now see. Deliberation, openness, the give-and-take of a free society, the process of consulting with experts and those who might be affected by legislation, a Congress that squarely addresses the tough questions that need to be answered if we’re to move forward as a society — all have fallen victim to Congress’s abandonment of the regular order. And largely because of this, Congress no longer plays the role that our founders envisioned and our diverse, complex society needs.

Now, I don’t want to give the impression that the regular order is flawless. Any process will have its problems, and even when it was observed, the regular order still put too much power in the hands of too few people.

But it was far better than the ad hoc, unpredictable, and often dysfunctional process we see now. Because once the regular order breaks down, democracy-defying habits like omnibus bills, sleight-of-hand legislating, and powerful leadership teams take hold.

And the result isn’t just an institution that no longer represents the American people. It’s also a bad product: legislation that isn’t vetted, doesn’t reflect a consensus among members, and often reveals itself to be unsustainable once it meets the real world.

In short, if you’ve got a bad process, you’re likely to create a bad result. A good process doesn’t ensure good results, but it definitely boosts the chances of getting to one.

We have two centuries of experience on Capitol Hill that have taught us how to run a legislature so that the voices of the American people can be reflected in the halls of power, multiple viewpoints get fair and respectful consideration, and ordinary legislators have a fair shot at influencing the results. Until we get back to that, no amount of tinkering with Congress will add up to much.

Lee Hamilton is a Senior Advisor for the Indiana University Center on Representative Government; a Distinguished Scholar at the IU Hamilton Lugar School of Global and International Studies; and a Professor of Practice at the IU O’Neill School of Public and Environmental Affairs. He was a member of the U.S. House of Representatives for 34 years.