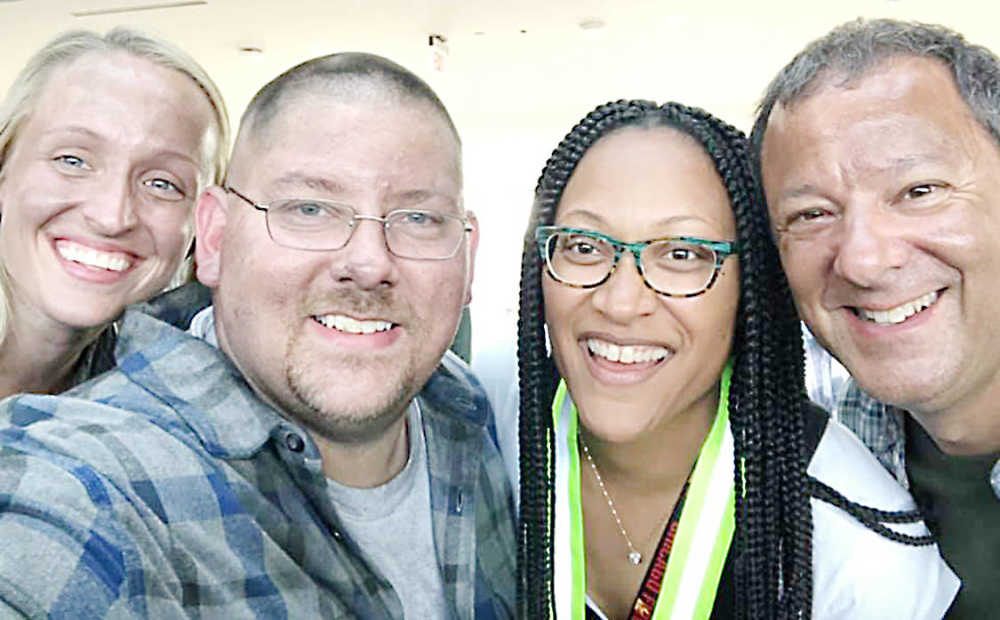 Taking a break from playing a college student fleeing a fire in a recent filming for “Chicago Fire,” Clinton Township Fire Department Assistant Chief Kenneth Stone (second from left) enjoys his time on the set with some new friends.
Courtesy photo

CHICAGO — Kenneth Stone is accustomed to donning the turnout gear of a firefighter and charging into burning buildings.

Stone, who is the assistant chief of the Clinton Township Fire Department, spent last Thursday and Friday in Chicago — technically the northwest suburb of Schaumburg — working as an extra for an upcoming episode of the NBC series “Chicago Fire.” 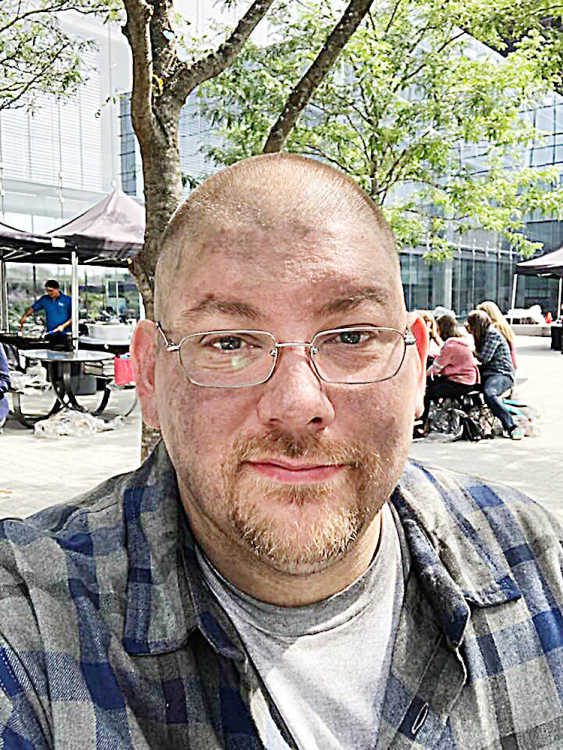 Not only did Clinton Township firefighter Kenneth Stone learn what it was like to run away from a fire while filming an episode of “Chicago Fire” recently, he also had to spend time in makeup having someone apply the “soot” that would normally accumulate naturally were he fighting the fire.
Courtesy photo

Filmed at the Zurich building in Schaumburg, the scene in which Stone appears involves fire victims fleeing from a burning building.

“I was a college student escaping a building that was one fire,” Stone said. “It’s going to be one of the first crossover episodes that will be aired this year.”

These crossovers are when the shows in Dick Wolf’s “Chicago “ franchise — “Chicago Med,” “Chicago Fire” and “Chicago P.D.” — come together for an episode involving more than one cast.

While the two days on the set were a thrill for Stone, this won’t actually be his first appearance on the show.

“I’ve been doing things with ‘Chicago Fire’ since season five. I’ve had a few opportunities to do some firefighting parts,” Stone said. “I’ve been on four times. My first one was I was one of the interstate drivers behind an ambulance when it had an accident. Then a couple of other times I’ve been in firefighting roles.”

A fan of the show since it started in 2012, Stone eventually got his name in with a casting company for the show. He waited even longer to get that first call.

“I follow the show. I’ve followed it since season one. I grew up watching ‘Backdraft’ and ‘Ladder 49,’” Stone said. “After a couple years, I got this call, ‘Hey, we need someone for this scene.’ I’ll get calls or notifications of, ‘Hey, are you interested in this scene?’”

Living three hours from Chicago and having a regular job mean Stone can’t answer every casting call, but he enjoys it when he can make the time.

“It’s different being on the other side, being the one under the helmet for 15 years and going into the fire,” Stone said. “It’s totally the opposite being the one running from the fire, trying to run from the fire. It’s a cool concept just to look at it from a civilian’s point of view and where I would’ve been before I became a firefighter.”

“Knowing it’s fake and having to pretend that it’s real — I think that being a firefighter I can put that extra into it.”

While an exact date for the show on which Stone will appear has not been set, the season eight premier is Wednesday, Sept. 25. This particular crossover show is set to be the fifth of the season, making it likely to air in late October.

Regardless of when he will next appear on television, for now Stone can relish the memories and friendships he made in the process.

“It’s a pretty neat experience getting to do things with the cast and crew and getting to interact with the people who are full time on the show,” Stone said. “It’s a cool experience.”