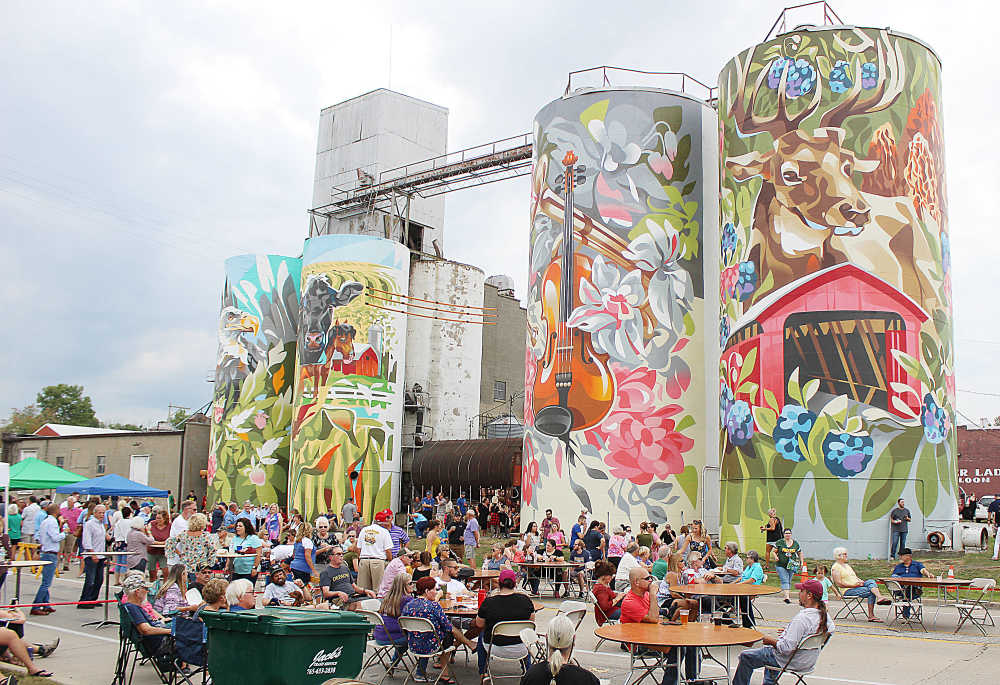 While enjoying a community block party Sunday evening on Veterans Memorial Highway, community members turn and bask in the colors of the 8,000-square foot mural that now adorns the south side of the S & W Feed Center silos.
Banner Graphic/Jared Jernagan
Order this photo

You can’t exactly paint an 8,000-square foot canvas in secret.

So it’s impossible to think of the block party Sunday to celebrate the completion of the mural on four silos at S & W Feed Center as an “unveiling.”

In truth, the new mural — one of the largest in the state — was unveiled little by little over the course of the past several months.

It began with members of the Putnam County Mural project accepting input on the style and content of the oversized painting.

It continued with the committee taking the public’s suggestions and choosing world-renowned mural artist Key Detail (aka Andrei Krautsou) to execute the community’s vision.

Then there was the public vote on the two designs submitted by Krautsou, as well as a few tweaks to finalize. 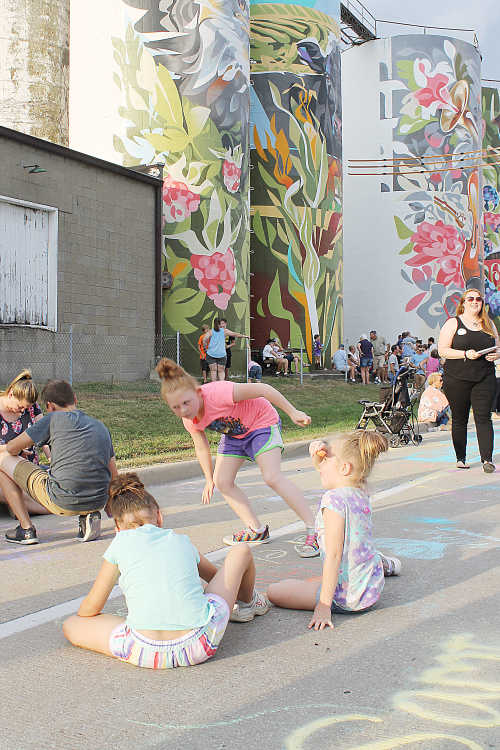 A group of young girls add some street chalk art to the color provided by the mural.
Banner Graphic/Jared Jernagan
Order this photo

But the unveiling really came over the last two weeks as Krautsou worked 12-hour days in the basket of a cherry picker, going through can after can of spray paint.

The public watched and even took a few extra drives down Veterans Highway as the sketches appeared on the silos, followed by the painting process, moving west to east, until the final -- and largest -- panel was completed just a day before Sunday’s celebration. So, no, Sunday was not an unveiling.

A celebration? No we’re on the right track.

Sunday was exactly what it was billed as — a party, complete with food, drink, street art and even music from one fo Greencastle’s favorite local musicians.

In the end, blocking off nearly a half mile of Veterans Highway was not overkill, as much of the space west of the party was used to park cars sideways along the normally busy road.

“You know there’s a party going on in Greencastle when you have to park in Cloverdale,” Sipe joked.

And why shouldn’t it be celebrated?

With $34,000 in donations from more than 260 donors, as well as another $30,000 from the IHCDA, a concerned group of citizens took what were simply an aging group of silos and turned them into a point of beauty at the south entrance of the city, a conversation piece that shouldn’t fade anytime soon.

“The scenes in these silos will continue to spark conversation within our community,” Mural Committee Chairman Chris Flegal said, “about who we are, and where we are headed. Future generations will create new meanings and interpretations as we enjoy this work of art for years to come.”

Of course, it was never a given that the project would get off the ground. A year ago, they were just some old silos, the unused back side of Rick and Rhonda Woodall’s business.

Flegal said he asked Rick recently if, when the committee approached him about using the silos for a mural, he believed it would ever come to fruition.

“He said no, he thought we were nuts,” Flegal said with a laugh.

But then some people started to believe. It started with the committee of Alexandra Chamberlain, Flegal, Eric Freeman, J.D. Grove, Kate Knaul and Kristen Fuhs Wells.

It continued with stakeholders such as the Woodalls and the City of Greencastle really beginning to buy in.

It really took shape with not only the selection of designs, but with the month-long fund drive that resulted in raising $34,000, only to be match by another $30,000 from the state.

Selecting Krautsou really was the last detail -- if you’ll excuse the pun -- to bringing the whole thing together so beautifully.

Both Dory and Flegal went out of their way to thank Krautsou, wife Julia Yu-Baba and their toddler son Max, for the couple of weeks they spent in the community.

“The family became part of our family for the last several weeks,” Dory said. “We invite you back any time for a respite from the pace of life in the big city.”

“I think we can all agree that the community and our committee made the right selection,” Flegal said.

With its celebration of patriotism, our rural heritage and patriotism, the mural now stands as a reminder of what this community can do when it comes together.

“This mural now becomes a constant reminder of the celebration of our heritage and the arts here in Greencastle and Putnam County,” Dory said.

It also now stands as a challenge for what will come next. With the Greencastle Civic League having installed a number of murals in recent years, it certainly wasn’t the first, but it probably won’t be the last either .

But whatever community beautification project comes next will be following in some big footsteps.