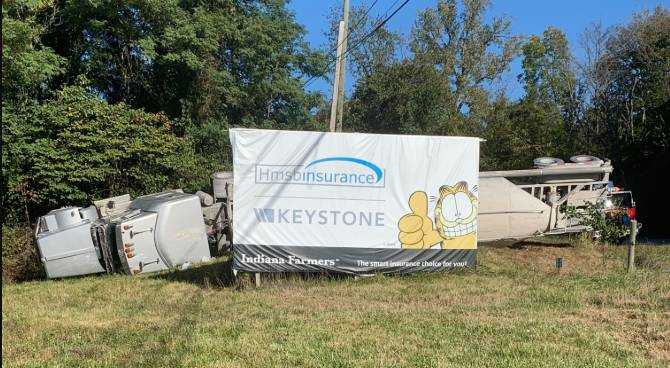 Still grinning and giving the thumbs up, perhaps Garfield is aware of the trouble he narrowly avoided, as an overturned semi tanker is stopped a few feet short of destroying this insurance billboard on U.S. 231. The semi driver was taken to Terre Haute Regional Hospital with what were believed to be minor injuries. It could have been much more serious had he not avoided plowing into a line of stopped traffic at the scene.
Courtesy photo

After it narrowly avoided destruction at the hands of an overturned cement tanker Wednesday morning, it’s worth asking if an Indiana Farmers Insurance billboard was “in good hands.”

Either way, the cartoon cat on the billboard and, more importantly, the semi driver and multiple other motorists, are fortunate to still be smiling following the incident.

At 9:32 a.m., officers were dispatched to the south end of Plessinger Hill, where a semi tanker was overturned off the west side of the road.

Southbound in the 2009 Kenworth semi tractor registered to KBT Enterprises, Jeremy Dennis, 45, Middletown, crested the final rise of Plessinger Hill to see traffic stopped behind a garbage truck that was waiting to make a left turn onto Tall Oaks Lane.

In an effort to avoid hitting the vehicles, Dennis jammed his brakes turned into the ditch, leaving the west side of the roadway and hitting an embankment on the far side of the ditch.

This caused the tractor and fully-loaded tanker to roll onto their side, just shy of the HMSB Insurance billboard with a grinning Garfield the cat on the front.

“It would have been a lot more serious had he not turned into the ditch,” investigating officer Deputy Matt Biggs said.

Biggs said speed may have been a factor in the crash.

Dennis complained of hip pain but was awake and alert following the crash. Operation Life transported him to Terre Haute Regional Hospital. His injuries were not believed to be serious.

Traffic in the area was restricted to a single lane for about 30 minutes.

However, responders remained on scene for quite some time as wreckers from Curtis Wrecker Service worked to get the tractor-trailer upright. The full load of cement made this a harder and more precarious job than it might otherwise have been.