The Bell Is Back

By NICK WILSON, For the Banner Graphic 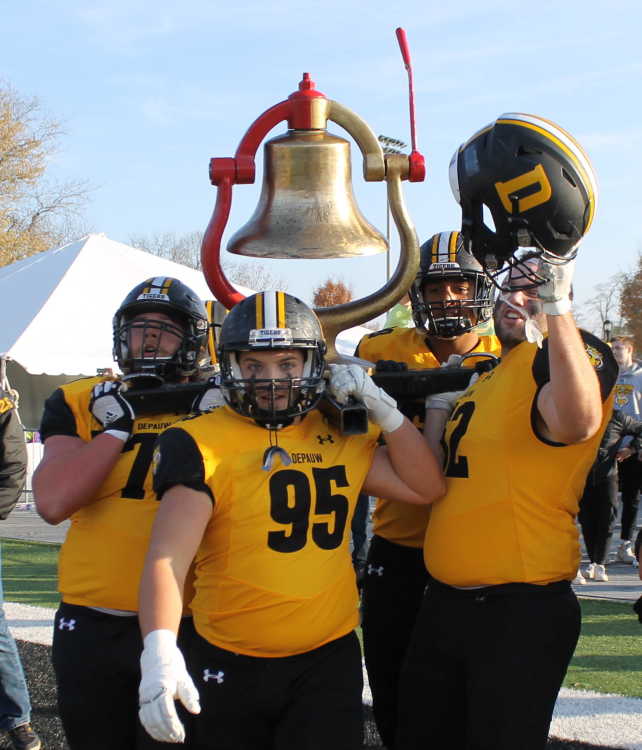 DePauw players hoisted the Monon Bell on their shoulders shortly after taking possession of the traveling trophy from Wabash Saturday afternoon. The Tigers defeated the Little Giants 17-13 for their first victory in three years.
Order this photo

When DePauw head coach Bill Lynch and his Tigers stepped onto the gridiron Saturday, their mission was clear: Bring home the Bell.

And they did just that.

With 1:31 to play in the 126th Monon Bell Classic against the visiting Little Giants of Wabash College, the Tigers began their final drive of the game from their own 25-yard line on the wrong side of a 13-10 score.

Little did Lynch know, however, this grind-it-out classic of a game was about to turn in the Tigers’ favor on one huge play.

“It wasn’t one of those plays that, when we called it, we expected a touchdown,” Coach Lynch said after the dust had settled. “(Gavin) Ritter made a great adjustment on his route, and Chase (Andries) just made a great throw. He’s got some speed. I’m glad the endzone finally got there.”

With just 48 seconds on the clock, Ritter streaked 62 yards down the right sideline, reeling in a near-perfect pass from Andries in stride to beat would-be defender Artie Equihua to the near corner of the endzone. Having already beaten another defender, Ritter narrowly escaped the safety’s shoestring tackle by extending the ball across the plane just before his knee touched the turf, giving DePauw a 17-13 lead with only 38 seconds remaining. 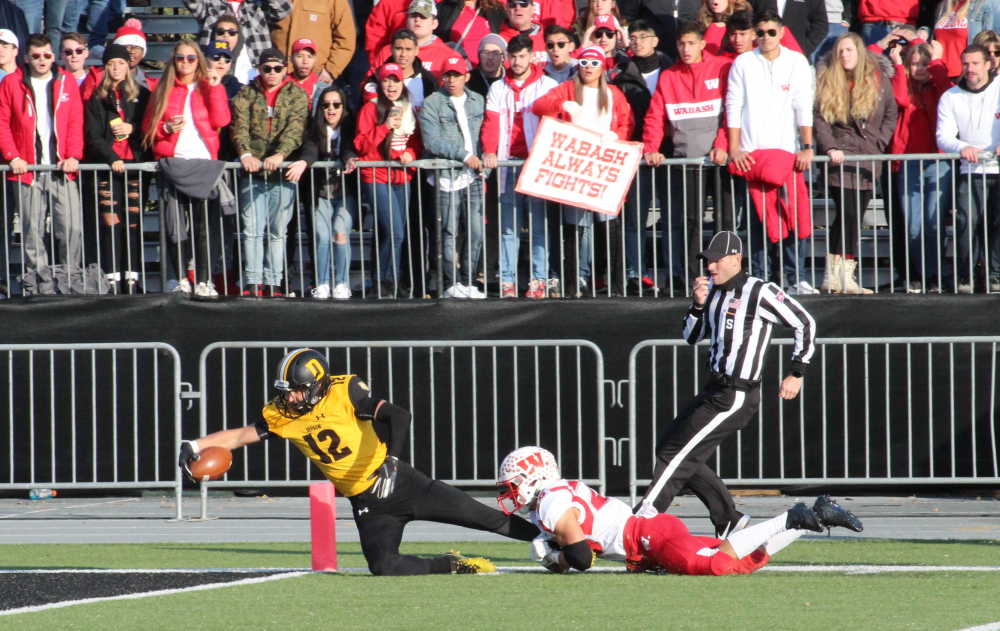 DePauw junior Gavin Ritter stretches for the score, eluding the tackle attempt of Wabash defensive back Artie Equihua. The score gave DePauw its first lead of the game with just 38 seconds to play. The Tiger defense held on to seal the victory.
Banner Graphic/JARED JERNAGAN
Order this photo

Despite some bare spots in the bleachers when the game began, crowds had filled Blackstock Stadium to near-capacity by the time Andries connected with Ritter for the play of the season.

And now, with 33 seconds to score following the kickoff, the Little Giants needed a touchdown after Tiger placekicker Jack Brush added the extra point, giving his team an unyielding four-point lead.

A strong defensive stand ensued for the Tigers, undoubtedly feeding off of the still-screaming DePauw fans who were inching closer to the field as the final seconds ticked by. Three completed passes and three timeouts later, only five seconds remained.

Just as fans couldn’t handle any more anxiety, DePauw’s Keivan Rahimi sacked Wabash quarterback Liam Thompson six yards behind the line of scrimmage to end 2019’s Battle for the Bell once and for all.

What happened next was pandemonium.

Tiger fans stormed the field, taking possession of the coveted Bell before bringing it to the DePauw sidelines to ring until well after Wabash fans had returned north.

“This is going to be good for our campus community as well as our football team,” Lynch said.

Lynch added that his team overcame several obstacles in the week leading up to the game. Not only are emotions at a high for both schools before the big game, there was another factor that came into effect a few days before.

“The weather was so bad this week, and sometimes when you have bad weather, your kids lose focus. They’re more interested in throwing snowballs than getting better,” Lynch said. “This (field) was ice Wednesday ... but our kids never batted an eye. Right then, I could tell these guys were focused.

“They always get excited for the Bell game, but there’s a difference between being excited and being focused. When you’re focused, you’re going to make the plays you need to make.”

Focus was indeed key throughout the game as DePauw never led until its final score. Never losing sight of the Bell, the Tigers were aided by a baker’s dozen of experienced seniors who, after missing an NCAA Division III playoff berth, came into the game knowing it would be their last.

“It means a lot to our football team, particularly our seniors,” Lynch said. “This is kind of a seniors’ game, and I’m really happy for them.”

The first score of the game came when Wabash’s David Marsh recovered a fumble for a touchdown to take an early 7-0 lead. DePauw’s Jarrod Stiver punched in a seven-yard run in the second quarter, sending the game into halftime with the rivals tied at seven each. 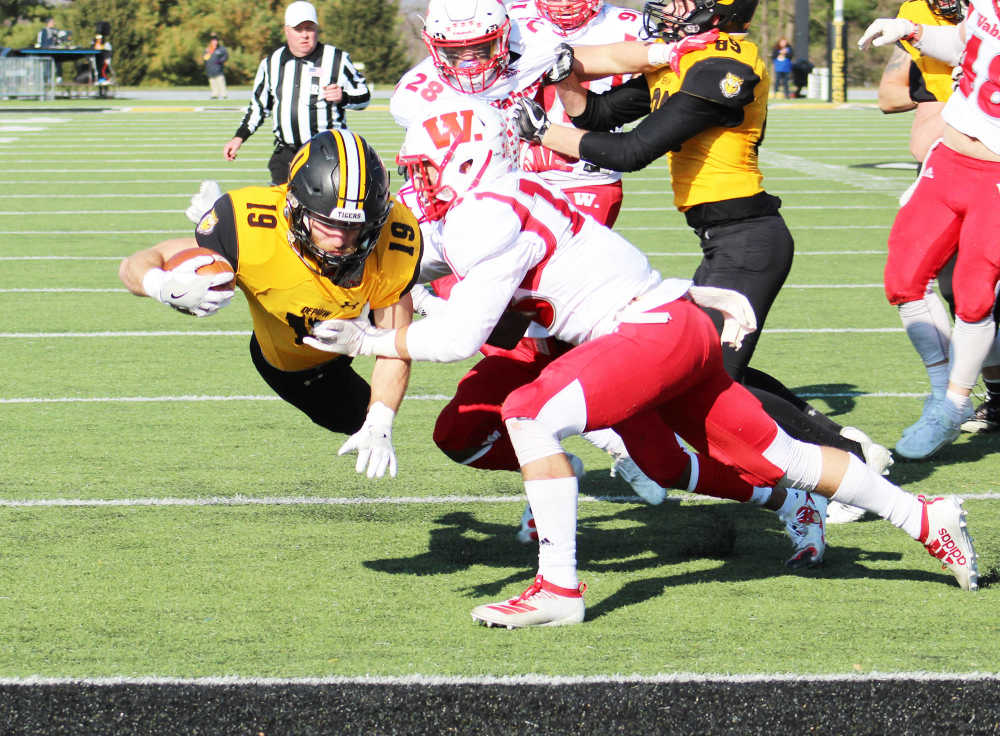 Jarrod Stiver of DePauw scores a seven-yard touchdown in the second quarter on Saturday that tied the game at 7-7.
Banner Graphic/JARED JERNAGAN
Order this photo

The third quarter was highly defensive for both teams with only a Little Giant field goal scored by Jacob Handley. Wabash converted only one third down the entire quarter, and DePauw saw three penalties for a total of 35 yards.

However, the fourth quarter proved to be the most consequential. A pair of field goals, one by DePauw’s Brush to tie the game at 10 at the 13:28 mark, and another by Wabash’s Handley to retake the lead at 13-10, set up a potentially disheartening scenario for the Tigers.

Until Andries to Ritter happened.