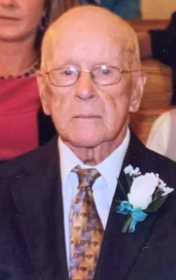 Noble was born on the family farm East of Greencastle on June 20, 1920. He was the son of Clifford H. and Jessie (Clary) Fry.

Noble worked construction for a few years and then farmed. He owned dairy farms in Putnam and Montgomery counties.

He was a member of the Parkersburg Christian Church where he served as an elder, deacon, Sunday school teacher and trustee.

He was preceded in death by his parents, wife, son Ralph C. Fry, daughter and son-in-law Barbara and Russel Brown, brother and sister-in-law Gregory and Edna Fry, sister and brother-in-law Mary and George Dawson, and brothers and sisters-in-law, Herschel and Jane Nichols, Robert and Anne Nichols, Doyle Nichols, Charlene Nichols and Howard and Lucille Burkett.

Due to the current directive from the governor, there will be a private burial.

Friends are invited to visit www.serviesmorgan.com to share a memory or leave a condolence with the family.