CLOVERDALE -- The municipal government in Cloverdale is now facing a civil complaint from one of its former employees after terminating him recently.

The most concerning issue in doing so may be that the town’s officials allegedly violated the Open Door Law and did not make the decision public. 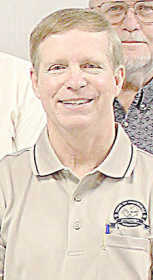 Last Thursday, former Town Manager Wayne Galloway filed a lawsuit with the Putnam County Circuit Court against the town for conducting such action behind closed doors.

In a special meeting held on Tuesday, March 24, the council approved ordinances relating to the COVID-19 spread. The agenda also included amending salaries at the Cloverdale Police Department.

The council then went into an executive session to discuss what was provided as malfeasance having been committed by a town employee.

Wayne Galloway was invited to stay for this session. However, he walked out of the town hall not long after it began at 7 p.m.

Clerk-Treasurer Cheryl Galloway, who is also Wayne’s wife, was advised not to stay. Town Attorney Daniel Hofmann stated in an email between himself, the council and the Galloways that her attendance would “not be necessary.”

According to the complaint, Hofmann sent a letter to Galloway at nearly midnight on Thursday, March 26 stating that his termination would take effect the next day.

The letter directed Galloway to vacate his office by 10 a.m. the following day, and to leave his keys, IT information and other property belonging to the town.

The letter also provided Galloway was given two weeks to “finalize (his) job and responsibilities” at the executive session. However, it stated that this was to be disregarded.

The clerk-treasurer claimed Mr. Galloway did not see the letter until much later, as he was tending to his duties. She also stated she was not officially made aware of the issue until Wednesday, April 8.

“They (the council) told Wayne that they wanted to go a different way,” she told the Banner Graphic Monday morning.

Section 5-14-1.5 of the Indiana Code states that, “official action of public agencies be conducted and taken openly, unless otherwise expressly provided by statute, in order that the people may be fully informed.”

“The town can’t take official action without a public agenda and holding a meeting in public,” he related to the Banner Graphic Monday morning, professing that the town did neither.

Waterfill stated Galloway was given an ultimatum during the executive session to either resign or be fired. The complaint reflects that Galloway said he would not resign.

While the document notes the clerk-treasurer was not invited to the session and “no one attested this decision,” the town attorney or a council member may be allowed to take attendance and minutes.

Galloway has served as the town manager since November of 2014, and was named Cloverdale’s interim building inspector in 2017.

He is seeking reinstatement in both positions, as well as back pay, benefits and compensation of attorney fees and court costs.

Hofmann told the Banner Graphic Monday afternoon that Galloway’s termination was originally to be announced during the council’s April meeting. However, other events — which he did not expand on — furthered his removal.

“The town does intend on contesting any allegation Mr. Galloway has made,” Hofmann said. “The council believes it was wholly rightful, and it’s in the best interest of the community to fight it.”

No specific reason has been given for Galloway’s termination. However, the council previously questioned why he was drawing two salaries as both the town manager and Cloverdale’s building inspector.

During its regular March meeting, the council scrutinized the clerk-treasurer’s handling of the budget, especially when it came to funding the police department.

In a memorandum shared with the Banner Graphic and directed to the council, the clerk-treasurer laid out how the budget for 2020 was set up.

She provided that Mr. Galloway and Town Marshal Steve Hibler were called in by July to give a “wish list” of funds they needed. Galloway asked for a salary should someone else take over as building inspector, while Hibler was looking to hire more officers.

Mrs. Galloway claimed that CPD had a $10,000 increase for operating funds and $3,000 for salaries. The building inspector’s bracket was increased to $40,000.

She also figured the cost of demolition downtown and a Community Crossings grant. The budget was still considered tight altogether at $590,000, and as such Galloway said she was working with the town marshal to cut it down.

Cloverdale police saw a turnover of six officers in 2019. The tax levy, which Galloway provided was $317,156, was to be used to fund the police department, with $200,000 being held as reserve.

The 2020 budget was passed last September with no changes. The council later approved a salary ordinance in November stipulating $1,000 police increases, as well as the building inspector’s $40,000 with the position being vetted.

“It seems the whole issue is the building inspector was taking money from the police,” Galloway wrote. “I have worked diligently to be fair across the board to all associates and be a good steward of taxpayers’ money.”