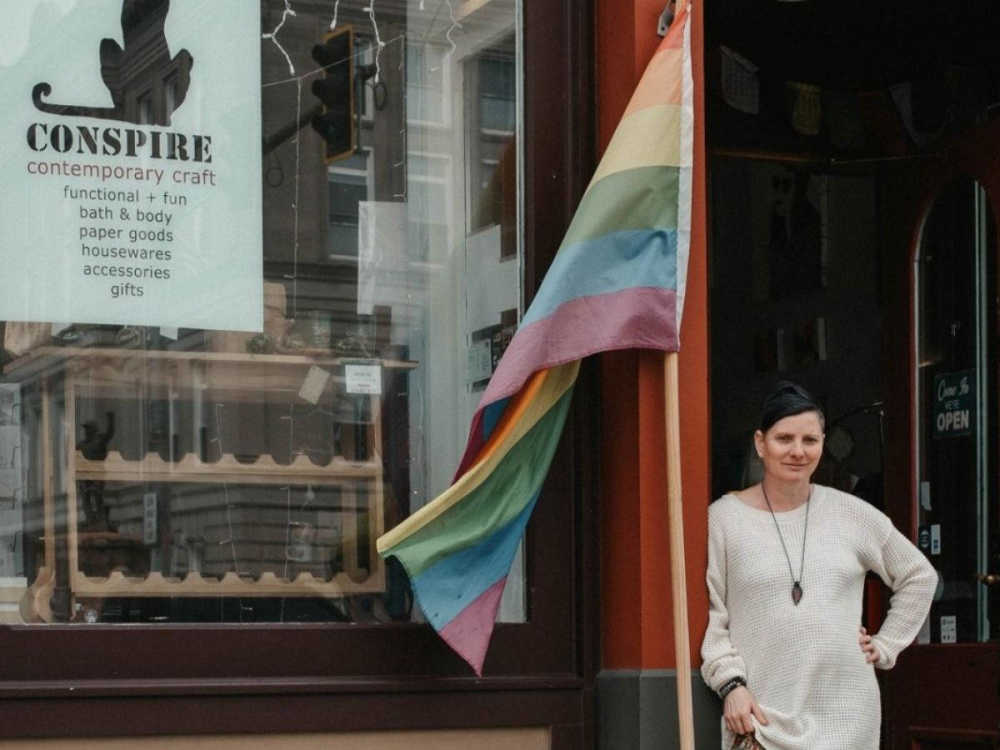 J.D. Grove stands outside Conspire, which she opened as a place for local artists to meet and share their work. Grove is looking to expand the business downtown.
Courtesy photo

The COVID-19 spread and the stay-at-home measures to help mitigate it have affected local businesses in different ways.

Some restaurants have moved to take-out or delivery to overcome the loss of in-person dining. Other essential businesses such as trash and vehicle service have had to adapt to keep customers safe.

Conspire: Contemporary Craft, the small boutique located on the downtown square in Greencastle, is feeling the pinch as it anticipates to expand as a locus for different modes of community outreach.

Tamrha Richardson, a friend of owner J.D. Grove, started a GoFundMe fundraiser last Sunday to enlist community supporters to help with this cause. The stated goal has been to raise $10,000, and this is close to being realized.

According to the GoFundMe page, Conspire is looking to move to a new location on West Washington Street that will be “half boutique, half community center.” Reflecting Grove’s involvement in social causes, Richardson wrote that the space will focus on LGBT youth and community organizing in general.

While the project has been moving forward up to this point, the restrictions on social gatherings, travel and commerce have affected the move. Richardson felt compelled to call neighbors and friends together to support Grove.

“Money has already been invested, the construction ongoing,” Richardson wrote on the page. “The move is happening ... but the rent is doubled and funds that were expected have vanished.

“This is a needed space for community gatherings, classes, activities for children ... and we can’t lose it,” Richardson wrote further. “J.D. and Conspire have stepped up so many times over the years for us. Let’s step up for her.”

As of Thursday afternoon, the fundraiser was up to $9,430, with 112 donors participating in the cause and 631 shares online.

Grove opened Conspire in 2016 as a venue where local artisans could connect and show their work. The shop has served as a meeting place to organize vegetarian meals though the Food Not Bombs organization.

Update: As of Friday afternoon, the fundraiser had surpassed the $10,000 goal.