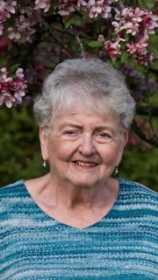 Liela Sue Woodall, 79, wife, mother, grandmother and if you were blessed to know her, a great friend for life, died peacefully on April 20, 2020 in her home in Greencastle, with her children and granddaughter by her side.

Sue was born on March 18, 1941 in Indianapolis to Leonard Rowe and Gertrude Olive (Keiss).

One summer in high school she ventured with her best friend, Judy, to Greencastle. There, by chance, she met and fell in love with a handsome young farmer named Nelson. They were married on June 21, 1959 at her home in Indianapolis and made Greencastle their home over the course of their 58 years together until his death in 2017.

Sue worked several jobs throughout her life, saying her favorite was working beside her best friend, Cheryl Hammond, at the original Dairy Queen in Greencastle. However, she was primarily and very happily, a mother and homemaker.

Sue’s needs in life to be happy were very simple. Christmas...she loved Christmas. Any excuse to find another decoration to put out, she found it. As she said, "There's no such thing as too many snowmen!"

A proverbial green thumb, she loved to grow and can her own vegetables and, if you ask anyone, they were always the best ones to eat. She loved planting all types of flowers, mostly just to marvel at their beauty and was once told that she could plant a 2X4 and grow a tree, which was probably true!

She loved to play cards weekly with her friends and meet them for breakfast every Friday morning.

A glass of iced tea and bird watching or reading a book from her porch swing was every bit as entertaining as blockbuster action movies, which she also loved, especially the movies she knew her son had worked on.

Sue was a person who was genuinely happy for other people. She would always help anyone who needed her without hesitation. She was very talented at making and decorating cakes for all occasions and is very well remembered for making the best tasting ones (her secrets were almond extract and to freeze the cake to make it extra moist). Sue loved children, anyone’s children. Ever the Mother, she would happily care for your children as if they were her own.

Last year Sue was able to live a lifelong dream to take a cruise to Alaska with her daughter, granddaughter, her brother, Bud, and family friends Gerald and Sherry Koger. She didn’t let her ailment slow her down for one second, instead she took in the entire trip with childlike joy.

Sue is preceded in death by her husband, Nelson, whom she spent the better part of their retirement lovingly being his primary caregiver, her parents, mother-in-law and father-in law, Bernadine and James Woodall, who were as close to her as her own parents, and sister-in-law Charlotte Rowe.

In lieu of donations, please plant a flower in Sue's memory. That would be the perfect gesture for a perfect lady.

Bittles and Hurt Funeral Home was in charge of the arrangements.