Lone bid on county road work comes in over budget 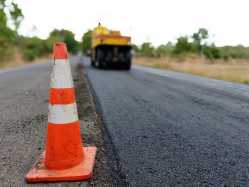 When it comes to the cost of road paving, Putnam County continues to be at the mercy of the only contractor submitting bids on the work.

For the second straight year, the county received a $1 million from the Indiana Department of Transportation, which is supposed to cover 75 percent of the cost of specified paving projects in the county.

And for the second straight year, the only bid came in from Wabash Valley Asphalt at more than $200,000 more than the original estimate.

With Community Crossings being a 75-25 match between INDOT and the locality, the estimated cost of the project as submitted to the state should not have exceeded $1.33 million.

Upon opening the bid during their meeting Monday morning, the Putnam County Commissioners and County Highway Supervisor Mike Ricketts did little to hide their exasperation.

“For the record, we advertised it twice and we sent out four packets to be bid to four different companies,” Ricketts said.

However, he listed the problems with each of the other three, saying Milestone is the same company as Wabash Valley Asphalt and Putnam County is on the line between the coverage area of the two.

Ricketts added that Dave O’Mara Contractor is no longer operating in Brazil.

O’Mara did all of the county’s hot mix paving work in 2018, coming in well under Wabash Valley’s bid. County officials were also pleased with he quality of the O’Mara work.

Finally, he said that Rieth-Riley out of Danville was uninterested.

“They don’t act like they want to do business out here,” Ricketts said. “But we try.”

As originally submitted, the plan for the Community Crossings grant involves a little more than 12 miles being resurfaced through the funds, which includes:

• Bainbridge-Roachdale Road from Bainbridge to County Road 1000 North in Monroe and Franklin townships;

• Lonestar Road from Manhattan Road to Bridge 122 in Greencastle Township;

The higher bid amount could mean one of two things for the county: Either eliminate part of the Community Crossings paving projects or spend extra money, eating into the annual budget for other paving and chip-and-seal projects.

The good news is, Ricketts had actually planned for the possibility of the bid coming in high, so he allowed for about $1.55 million for the projects, meaning the bid only came in about $23,000 over his budget.

With this news softening the blow somewhat, and in the absence of another choice, commissioners Rick Woodall, David Berry and Don Walton accepted the Wabash Valley bid unanimously.

Besides the disappointing bid project, the county may have to deal with other budgetary issues when it comes to paving. Ricketts reported that in a recent consultation with the Purdue University Local Technical Assistance Program (LTAP), he was told to expect revenues from the state to be down based on traffic being down during the COVID-19 pandemic.

Ricketts told the commissioners if the LTAP projections are correct, they will have to make some decisions on what projects are postponed.