Zach Wilkerson one of three finalists for prestigious DePauw award 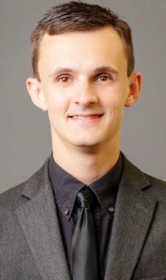 Zach Wilkerson of Greencastle has been named one of three finalists for the DePauw University Ferid Murad Medal, which recognizes the senior who has had the most significant scholarly and/or artistic achievements during his or her time at DePauw.

The award is named after 1958 DePauw graduate and Nobel laureate Dr. Ferid Murad, who in 1998 received the Nobel Prize in Medicine for his discovery of the role of nitric oxide in the cardiovascular system, which led to changes in treatment following a heart attack.

Wilkerson, the son of Scott and Beth Wilkerson, Greencastle, is a computer science and physics double-major at DePauw.

Early on in his DePauw career, Wilkerson discovered a passion for research that not only spanned a broad array of disciplines, but also has led to publications in peer-reviewed journals and presentations at national conferences.

For example, he helped design payload circuits and data collection algorithms for extended physics radiation experiments to investigate potential long-term patterns or fluctuations in the location of the Pfotzer Maximum in the upper stratosphere using weather balloons.

After graduation, he will attend Indiana University or Purdue University to pursue a PhD in computer science.

Cotton, meanwhile, is pursuing the B.M. in vocal performance and the B.A. in computer science by way of DePauw’s five-year double degree program.

The only undergraduate student chosen as a winner, he then competed with 10 other district winners at the Central Region Finals in Chicago, where he was awarded second place.

After graduating from DePauw, Cotton plans to pursue the Master of Music degree in vocal performance and opera.

Ignac is an international student from Croatia with majors in political science and French, and a minor in peace and conflict studies.

In addition to being a staple on Dean’s List, he is a Vera Scholar, a Presidential Ambassador, and a member of Phi Beta Kappa and Pi Sigma Alpha. He is also a recipient of both the Richard Bunch Award for Best Junior in Political Science and the Ambassador Viron P. Vaky Award for Inter-American Relations.

In the fall of 2020, Ignac will attend Georgetown University’s Master of German and European Affairs program as one of five transformational global public service leaders on a prestigious McHenry Fellowship.