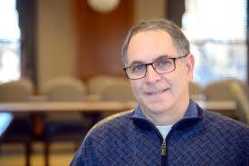 Dave Berque has been appointed DePauw University’s vice president for academic affairs, a post he has held for a year on an interim basis, through the 2022-23 academic year, President-elect Lori S. White announced Thursday.

White, who assumes the DePauw presidency July 1, also named Sarah Steinkamp, assistant dean of strategic and educational initiatives in the Division of Student Affairs at Washington University, as chief of staff, reinstating that vacant position at DePauw.

Berque, who also is a professor of computer science, began teaching at DePauw in 1992. He was appointed dean of academic life in 2013 and associate vice president of student academic life in 2016. He also has served as executive director of the Hubbard Center for Student Engagement.

In 1997, he was named the U.S. Professor of the Year for baccalaureate colleges by the Council for Advancement and Support of Education and the Carnegie Foundation for the Advancement of Teaching. The Indianapolis Business Journal listed him among its “Innovators” in 2006, noting that he developed software that improved interaction among students and teachers and was commercialized by DyKnow LLC. He received the Mira Techpoint Award for educational contribution in technology in 2007.

Berque graduated from Haverford College and earned master’s and doctoral degrees from Rensselaer Polytechnic Institute. He holds three U.S. patents and has received more than $1.57 million in external grant funding, including eight grants from the National Science Foundation.

“Dave’s excellence in the classroom, observed not only by the DePauw community but many far beyond our campus, combined with his experience in administration, have prepared him to lead the most fundamental facet of the university, our stellar academics,” President White said, adding that the Faculty Governance Committee strongly endorsed the appointment, citing his steady leadership during the pandemic and his commitment to shared governance. “I couldn’t be happier that he agreed when I asked to extend his appointment and remove the word ‘interim’ from his title.”

At Washington University, Steinkamp reported directly to White, who spent five years as vice chancellor for student affairs. Steinkamp holds two degrees from liberal arts colleges – a bachelor’s degree in sociology from Wells College and a master’s degree in health education from Ithaca College – and a doctorate in education from Southern Illinois University. She coordinated several Title IX working groups, working with students to improve the university’s processes, policies and survivor support; oversaw the design and implementation of a graduate certificate program in higher education; and developed Freedom of Expression and Dialogue Across Differences programs for students.

White said Steinkamp will support her and the cabinet with strategic planning; lead presidential initiatives; ensure the president’s office is appropriately responsive to internal and external constituents; and facilitate collaborative problem-solving when issues arise. She also will hold a part-time faculty appointment as an assistant professor of university studies.

“Sarah was a key member of my leadership team at WashU, so I’ve seen her outstanding leadership and interpersonal skills in action,” White said. “Her dedication to students, passion for education and the fact that she is an alumna of two liberal arts colleges will serve DePauw well, and I’m thrilled that she will bring her broad expertise to our campus.”

Both appointments are effective July 1. White was named DePauw’s 21st president March 3, when the Board of Trustees voted unanimously appointed her to succeed D. Mark McCoy, DePauw’s president since July 2016.