First Friday is no-go for August 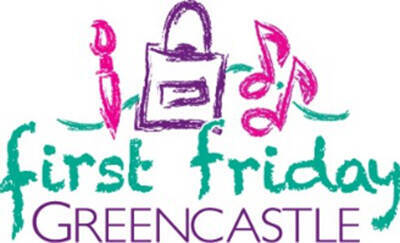 In previous years, First Friday only had the weather to worry about in separating a no-go from a successful evening on the Courthouse Square in Greencastle.

But 2020 has been a different breed, and First Friday organizers have lost April, May, June and July events to issues related to the ongoing coronavirus outbreak.

August First Friday would be no different. Despite organizers’ hopes to stage First Friday on Aug. 7, a request to close the streets for the occasion was voted down by the City Council at its July meeting.

By a 4-3 vote -- the same margin that in June approved street closings for the scheduled Aug. 21-22 Greencastle Music Fest -- the Council denied Main Street Greencastle’s First Friday request for street closures and a noise waiver.

Mike Richmond of Main Street noted that the July, August and September First Friday events are usually the most well-attended, with crowds typically ranging from 1,000 to 1,500 people.

He added that efforts had been made to keep the event as local as possible, not reaching out to too many vendors and limiting marketing to Putnam County to help provide more social distancing.

In addition, precautions such as additional hand-washing stations and hand sanitizer stations were planned, along with continued sanitizing of the outdoor tables.

It wasn’t enough in the eyes of the Council majority.

Councilor Veronica Pejril, meanwhile, suggested First Friday is now really like three events rolled into one with the crowd gravitating to three separate music venues at play -- on the stage on the north side of the courthouse, South Indiana Street between Moore’s Bar and Taphouse, and at Franklin and Vine streets in front of Wasser Brewing Co.

That being said, Indiana is still not to Stage 5, which would allow larger outdoor gatherings to occur.

“Right now,” Councilman Dave Murray noted, “this event and the Greencastle Music Fest would be prohibited under the governor’s guidelines.”

Murray also pointed out that the COVID-19 numbers for Indiana are going up again, not down, which is a perilous trend concerning public events.

“Maybe we have to move away from First Friday for 2020,” Councilor Stacie Langdon suggested. “I hope not. I’m going to vote against this and say we put it on the back burner for another month or the month after that.”

Meanwhile, Councilman Jacob Widner said he believes people are going to seek out entertainment, and if they can’t find it at the local level, will be forced to go to Marion or Hendricks county to enjoy some music or other activities.

”Why not provide a safe or the most safe option we can?” he asked.

Council President Mark Hammer said he had the same reservations for First Friday as he had for the Music Fest.

“How do we approve that and vote this down?” he asked.

For one thing, the Music Fest is still more than a month away and Indiana could move from Stage 4.5 to Stage 5, allowing larger gatherings than the 250-person limit currently in place.

All that will be taken into consideration, Mayor Bill Dory said, before the Music Fest actually gets a green light from organizer Gail Smith.

Councilman Cody Eckert made the motion to approve the First Friday request, getting a second from Widner. Councilor Pejril added a third affirmative vote, while casting dissenting votes were Hammer, Murray, Cohen and Langdon.

In a related matter, the Council extended street closure requests that will allow Moore’s Bar and Wasser to continue to provide outdoor seating for patrons. The extension is in place until one day after the next City Council meeting (Aug. 13).

Denied, however, was a Moore’s Bar request to allow for outdoor music on Saturdays until 10 p.m.

“It doesn’t make much sense to me,” Moore’s Bar owner Julie Meyer said, “to allow indoor music if you can go outside for live entertainment.”

Councilman Cohen, meanwhile, suggested that if outdoor music is allowed, “it becomes like a commercial block party.”

In other business, the City Council:

-- Unanimously approved first reading of Ordinance 2020-6, which amends the city ordinance designating stopsigns at intersections. The ordinance, which is expected to get its second and final reading Aug. 13, would add stopsigns at the north and south intersections of Woods Edge Boulevard and Cedarwood Drive. About a dozen residents were on hand at the meeting to report the speeding vehicles that go through the subdivision now that further development has occurred in the area.

“This is a safe and logical step for us to take for this neighborhood,” Councilman Widner said.

-- Heard Mayor Bill Dory report that the timetable for the DePauw University project that will close South Jackson Street south of Hanna Street for the installation of a culvert beneath the street for the storm sewer system is Aug. 3-Oct. 3. “That won’t be a fun project because of all the limestone,” Dory said.

-- Heard the mayor note that City Hall is now open but he encouraged the public to pay their utility bills via mail or use the drive through off Franklin Street.

-- Heard Clerk-Treasurer Lynda Dunbar report that she has been sending letters to residents whose unpaid water bills have accumulated during the COVID-19 crisis. Several have accumulated “very large bills and will be paying a couple hundred dollars a month to catch up,” she said. The state has ordered that no disconnection of service can occur before Aug. 14. The letters also note that they city is not applying a late fee but “eventually that will come to a halt,” Dunbar said.

-- Heard Councilman Murray suggest that the $30 reconnection fee for city water service needs to be increased in order to act as a deterrent. On too many occasions, residents with delinquent accounts have allowed their accounts to go to the shutoff stage, Murray said, then reconnecting for $30.

-- Approved a welcome letter for incoming DePauw students, “extending our virtual open arms.” The letter is probably something that should have been an annual undertaking already, Councilman Cohen said. “As a coach and recruiter (for DePauw), I have never had more calls from families concerned than I have this year,” he said. The majority of students are due to return to campus Aug. 17-21.

The Council’s next regular session is set for 7 p.m. Thursday, Aug. 13 at City Hall.