As pickleball interest grows, redone courts to reopen at Robe-Ann

Generally regarded as the fastest-growing sport in the United States, pickleball is having a Greencastle growth spurt as well.

In the past few weeks since the reopening of the pickleball courts in the northeast corner of Robe-Ann Park, Putnam County Pickleball Club members have seen a marked increase in interest. 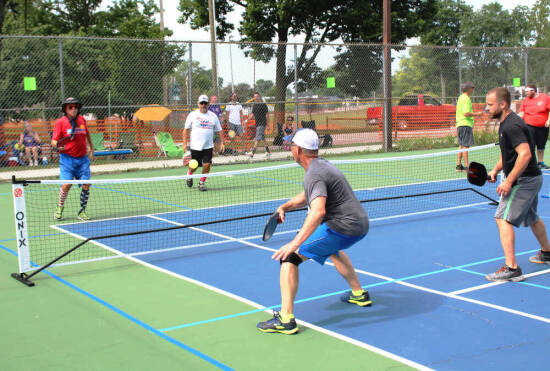 In honor of the pickleball courts being back in service, the club is sponsoring a grand reopening event set for 6-9 p.m. Saturday, Aug. 8.

“We’ve gotten confirmation that it’s OK to have it as long as we practice social distancing and use masks,” Dickerson said.

The free event is open to the whole community and will include ice cream and snow cones.

Beginners will be encouraged to try the game as paddles and pickleballs will be made available and instructors will be on hand. Tennis shoes are suggested.

All equipment will be wiped down in between uses, Dickerson assured.

Pickleball is a cross between tennis, ping pong and badminton, using a plastic ball and played on a court the size of a badminton court with rules similar to tennis.

The park offers six pickleball courts for recreational use while six more are available for tournament playing by laying down lines for courts on the adjacent tennis courts.

Nighttime play is limited now as five bulbs are out in the lights that illuminate the courts.

“Rod (Park Director Weinschenk) is on top of that, getting it worked out,” Dickerson said, adding that the club would like to pursue a grant to upgrade the lights from mercury vapor to LED.

When the courts were first installed at the park on July 4, 2016, the average age of players nationwide was 62, according to pickleball club founder David Boswell.

The club was formed in 2017 and membership continues to grow. Several players from the club have won tournaments in events all over Indiana.

Pickleball was invented in 1965 on Bainbridge Island, a short ferry ride from Seattle. Three dads – Joel Pritchard, Bill Bell and Barney McCallum — whose kids were bored with their usual summertime activities — are credited for creating game. Pickleball has evolved from original handmade equipment and simple rules into a popular sport throughout the U.S. and Canada. The game is growing internationally as well, with many European and Asian countries adding courts.