Cornell publishes stories he wrote as a youth 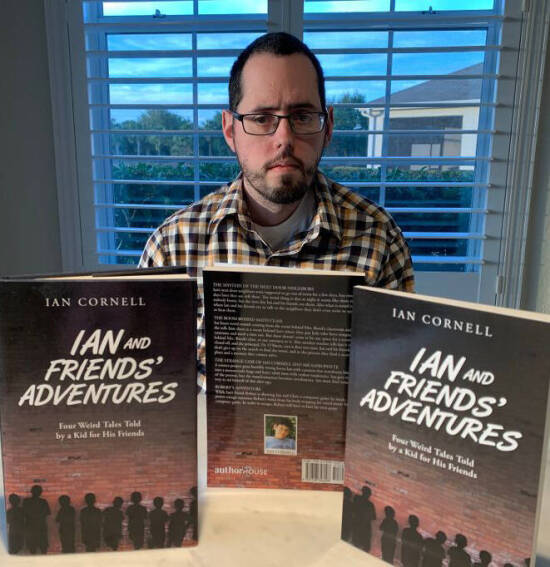 Ian Cornell wrote the stories from his new book when he was a Greencastle middle schooler.
Courtesy photo

Local author Ian Cornell has published a collection of stories Cornell wrote when he was a student at Tzouanakis Intermediate School and Greencastle Middle School.

Cornell, 37, wrote many stories as a child for his own and his friends’ and classmates’ entertainment, but had never thought to publish them until now.

Four of them are presented in “Ian and Friends’ Adventures: Four Weird Tales Told by a Kid for His Friends” as they were originally written. They have also been illustrated anonymously by a current fifth-grader at Tzouanakis.

Cornell writes in the preface that, as a child diagnosed with a form of Muscular dystrophy and also on the autism spectrum, “Writing allowed me to retreat into a world that I could control. In my stories I could do anything ... but I could also face and explore my weaknesses.”

He also says he got his inspiration from real-life events and places, so a Greencastle reader is likely to find the streets, schools, library and college in the stories familiar.

He hopes young readers will enjoy the book and see something of themselves and their classmates in the characters. He also hopes parents, teachers and counselors -- especially those who seek insight into how an autistic child sees and recreates his or her world -- will find the book informative.

Cornell has lived all his life in Greencastle, earned a degree in history from DePauw University and spends most of his time reading and writing.

He has volunteered at Deer Meadow Primary School, DJ’d a 50s and 60s music show at DePauw and been a driver for hire.

“Ian and Friends’ Adventures: Four Weird Tales Told by a Kid for His Friends” is available for sale at Eli’s Books in downtown Greencastle.