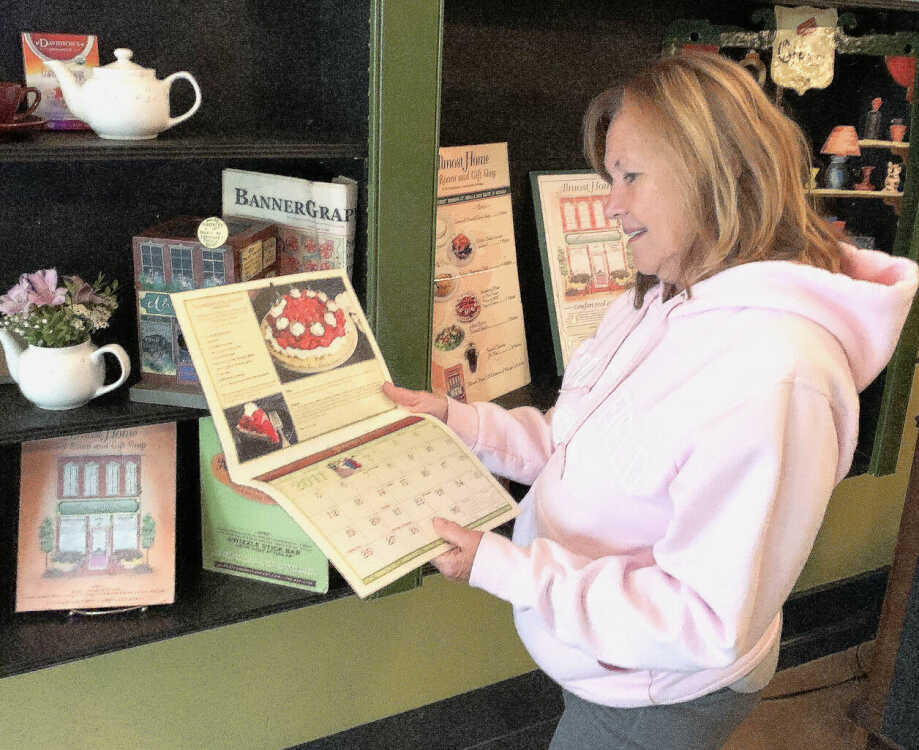 Almost Home owner Gail Smith looks over an old calendar showing off some of the restaurant’s delicacies as part of a display marking the 30th anniversary of the downtown eatery.
Banner Graphic/ERIC BERNSEE
Order this photo

Celebrating 30 years at the helm of Almost Home, Gail Smith can count the years rather uniquely.

“I can’t tell you how much broccoli cheese soup we’ve sold but we make 100 pounds of chicken salad a week,” Smith said, taking a late afternoon break to chat about her success story on the north side of the square in Greencastle.

She definitely knows you can’t make chicken salad out of chicken bleep.

“I double-checked your math,” Smith said. “You could probably add more because some weeks are more. Really 160,000 is probably closer to the total, relatively speaking.”

That Almost Home has sold that much chicken salad, broccoli soup or strawberry pizza is one thing. That it has endured 30 years is another.

Statistics show that 60 percent of restaurants don’t make it past the first year and 80 percent are out of business within five years.

Thirty years are in the books since Smith and partner Sara Malayer opened the place as a tea room with lace doilies on the tables. And Almost Home isn’t going anywhere soon if Gail Smith can help it.

“The cool thing about the independent restaurants in Greencastle,” Smith said, “is we like to spoil our customers and the community.”

For Smith personally, “it’s been very gratifying -- although exhausting at times -- to make a product that makes someone happy and they pay you for it,” she says.

And now after a brief change in management where Smith’s role had been diminished, it feels like old times as she’s back fulltime and more.

“Oh, yes,” she admitted, rolling her eyes a bit as she explains how much she really loves it. “Even though it’s physically draining on me now because I’m older, I still get excited about food. When (Fillmore farmer) Bobby Zaring brings in a big tray of homegrown tomatoes, I get excited. I think the excitement outweighs everything.”

That’s not to say should the right person come along and “want to continue with the Almost Home legacy,” Smith wouldn’t welcome that with open arms. “And I’m sure Lee (majority partner Lee Tenzer) would, too,” she adds.

Smith and Malayer began their association with the annual Holiday Boutique for 10 years, first in Sara’s historic old house on U.S. 231 North where deputies had to direct traffic because it generated so much interest, and later at the Walden Inn. Malayer stayed for six years at Almost Home, and since then it’s pretty much been Smith holding down the fort.

“I don’t think I’d do anything different,” she concedes. “All the wonderful people who’ve worked for me. I hear from a lot of them, just like my guests. The restaurant business, it’s up and down. There was a down time and now I’m back in here.”

And what does the future hold? Another 30 years?

“I have no idea what it’s going to be,” Smith said. “There has to be an exit strategy in my future. The things I really enjoy doing are the visionary things like the Music Fest, First Friday and our wine dinners. I like to bring more to my guests. I love food and I love people.

“And I’ve got some other ideas up my sleeve,” she says with a twinkle in her eye and a nod of her head.

Almost Home has seen its share of special events from engagement and wedding parties to life celebrations, retirement dinners, showers and monumental birthdays.

“This place feeds peoples’ souls,” Smith said. “It just gives you a warm feeling. Just like the name, we want you to feel part of home and feel like you’re part of the family.”

And they aren’t afraid to show it, often stopping the personable Smith in places like Kroger.

“I don’t know how many times I’ve gone to the grocery store and someone’s come up to me with a compliment,” she said.

Of course, the other side of the coin is true too as Smith tells about the lady who approached her in the store one day to tell her she “didn’t get enough grapes in her chicken salad.”

Smith was honored with the Chamber of Commerce Business of the Year in 2015 when Almost Home celebrated its 25th year. At the Greencastle Music Fest that August, Mayor Sue Murray proclaimed it Gail Smith Day.

Of course, it’s difficult to separate Smith and Almost Home from the Greencastle Music Fest, which began in September 2010 and marked its 10th year last August. This year’s concert sadly fell victim to COVID-19 and the 2020 shenanigans surrounding it.

“As a business owner, I was devastated,” Smith admitted. “As a promoter, it comes down to (thinking) I’m disappointing all these people. It was hard to give the bad news about it. But everybody understood. It’s sad, so sad ... and it hurt the pocketbook big time.”

Before the Stellar Grant enlivened the downtown, there was Gail Smith. The Almost Home facade was redone in 2012 as part of the Stellar effort, which motivated Smith again.

“I went to see Mayor Sue (Murray) and I said that with Stellar done, we need to do something downtown.”

That spawned First Friday, which Smith basically funded the first three years, paying for the bands and other essentials.

“This town’s been good to me, and I want to be good to the town,” Smith said. “I love my community. I see that in business in Greencastle every day during COVID, thinking this town’s not going to let that (demise of the restaurant) happen.”

But people keep coming back to Almost Home for their comfort food. Smith says the top-selling item isn’t even chicken salad or broccoli soup, it’s “our desserts,” namely strawberry pizza (which has won Best Dessert and the Peoples’ Choice Award at past Taste of Indiana events where Almost Home sold 4,000 slices of it), white wedding cake, upside-down walnut apple pie and more.

Besides her cooking and her personality, Smith also has plenty of elbow grease invested in the restaurant.

“I have totally risked my life for this place,” Smith smiled, “crawling around, painting, filling ceiling holes with caulk ...”

And falling off the ladder, as Sara related.

Then there’s the time Smith, who was living in an apartment upstairs at the time, was filling the bathtub to soak away her aches and pains.

She turned the faucet on, walked away and got involved in a phone conversation with her chef. The cleaning lady was working downstairs at the moment and suddenly water was gushing down, flooding the dining room.

“Water was like this deep,” Smith said, holding her thumb and forefinger about six inches apart. “There was nothing between that tin ceiling and the floor upstairs.”

Yep, almost like home. And that’s not chicken bleep.