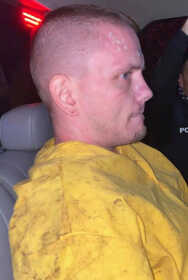 Having walked away from a Putnamville Correctional Facility work line seven hours earlier, offender Christopher Davis is taken into custody Friday evening after he was found sleeping in a pickup truck southeast of the prison.
Courtesy photo/IDOC

PUTNAMVILLE — A Putnamville inmate was located asleep in a pickup truck Friday evening after seven hours on the lam.

Davis was working outside the facility early Friday afternoon, which he was authorized to do, when he walked away around 1 p.m.

“I would like to thank all law enforcement personnel that assisted in the apprehension efforts — Putnam County Sheriff’s Department, State Police and DNR Conservation Officers,” Warden Dushan Zatecky said. “Emergency Response Operations responded in an extraordinary quick time, which played a vital role in our efforts. It was a collaborative effort that ended successful.”

Serving a two-year sentence for burglary out of Scott County, Davis had been eligible for release as early as March 2021. He also served a stint with the DOC for a 2010 burglary and battery conviction out of Clark County.