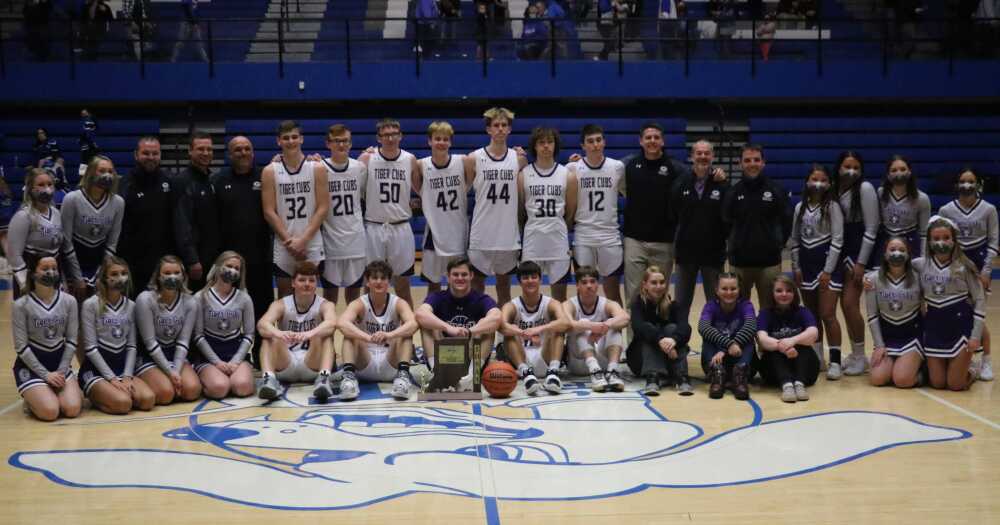 FRANKFORT – Before anyone realized it, Greencastle had already knocked Frankfort down, and nearly for the count, within the first three minutes of Saturday’s IHSAA Boys’ Basketball Class 3A Sectional No. 25 final at Case Arena.

The Tiger Cubs swarmed the Hot Dog offense, limiting the hosts to single digits in the first three quarters and had amassed all the points they would need by halftime, cruising to a second sectional title in three years with a 58-31 win.

“It does help when you come out and hit some shots, which we did. But, man, I thought we were so good defensively; it’s something we pride ourselves in and it helped us win a sectional.”

The barrage began with a broadside of threes as Benton Parmley and Brody Whitaker twice notched from deep for a 9-0 lead on just three shots.

Riley Goodnight got Frankfort on the board but Cade Plew’s up-and-under move forced the Hot Dogs into a time out with 4:51 showing on the clock.

A brief scoreless section was ended after Parmley was tagged with his second foul of the quarter and Goodnight hit a three, one that was answered by Whitaker.

Plew brought the lead to double-digits at 16-5 before Goodnight added two free throws to close the quarter at 16-7.

Freshman big man Jayce Strode, whom Frankfort tried to center the offense around, finally got on the scoresheet to start the second quarter to trim the gap to seven.

“(Strode) is fantastic for a freshman and dominated the first two rounds of the sectional,” Rector said about the Frankfort forward. “You have to make some decisions with how you’re going to defend him.

“With Cade’s length, we felt we could make him shoot over the top of Cade, so you have to credit Cade’s effort. You also have to credit the other guys because, while people may not see it, the other guys do such a good job of digging down in the post, it was difficult for him to get into a rhythm tonight.

“When Strode couldn’t get things going, it was difficult for any of the others to hit shots,” Rector added.

Whitaker hit a jumper while Plew added two free throws to move the lead back to double-digits at 20-9.

Landen Mejia missed out on a three-point play shortly thereafter and from that point, it was all Greencastle the rest of the half.

Evan Alexander had a three blocked but responded with back-to-back treys with a Nick Sutherlin putback making it 28-11 with 3:48 left until halftime.

Frankfort had little idea what was hitting it and stood off as the Tiger Cubs drained the remaining minutes off the clock, getting a Sutherlin three and two Whitaker free throws late to make it 33-11 at halftime.

The Hot Dogs started the second half with a turnover inside 10 seconds and continued to find little offensive flow with Strode being blanketed by the Greencastle defense.

Jade Ayres eventually converted a putback but Whitaker again had a three in response, adding another after two Strode misses at the line to make it 39-13.

Strode got his second basket after needing several moves to create space from Plew down low but it was the last basket for the Hot Dogs in the period as the Tiger Cubs got two baskets from Plew and a late inbounds score for Whitaker to stretch the lead to 30 at 45-15 entering the final eight minutes of play.

“You can’t kid yourself; (Frankfort) is a good offensive team,” Rector said about holding the hosts to 15 points through three quarters. “They put up 96 points against a good Tri-West team just days ago, so we knew we were going to need to have an urgency on the defensive end, which the guys brought out.

“You have to bring that to win a sectional and the guys did that three games this week.”

The lead would increase to new heights a few more times in the final quarter, hitting 32 points after two Plew free throws and reaching its peak of 34 after two Sutherlin free throws, Greencastle’s last points of the night.

By then, the celebrations had already begun as the starters left the game one by one and the reserves handled the final few minutes as the Tiger Cubs won their 36th boys’ sectional title.

“That’s the end goal every year,” Rector said about claiming a second sectional title. “You want to win every game, win the county and win the conference.

“All of those build up to this and beyond. It’s very satisfying because our kids and coaches put in a lot of time and sometimes it’s easy to get caught up in results rather than process.

“This group has bought into process and it’s always refreshing to get that sense of achievement,” Rector added. We’re happy to get the chance to play again at McAnally next Saturday.”