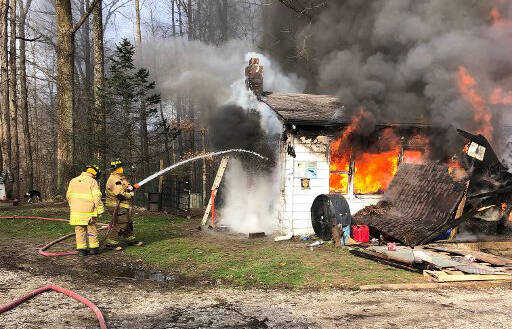 Firefighters work to put out a fire which destroyed a home in Washington Township Friday morning. Two pets were lost in the blaze.
Courtesy Reelsville Volunteer Fire Department

REELSVILLE — Two pets were lost in a blaze that destroyed a home in Washington Township Friday morning.

At about 9:30 a.m., a box alarm went out from the Reelsville Volunteer Fire Department for a structure fire located at 9870 S. CR 325 West. When firefighters arrived on the scene at 9:50, the fire was through the roof and had spread.

The Greencastle Fire Department responded with an engine, while the Cloverdale Township, Madison Township and Poland volunteer fire departments came with tankers. Reelsville arrived with an engine, a tanker and a rescue truck.

Reelsville Fire’s John McPherson told the Banner Graphic Friday afternoon that 20,000 gallons were used to extinguish the fire. He added that it took an hour to knock it down.

Firefighters were back in service by 1 p.m. after salvage and overhaul were complete.

McPherson said that nobody was hurt in the fire. However, both a pet snake and a pet turtle were lost.

According to Putnam County GIS, the home was listed to Michael Smiley of Reelsville.

No cause for the fire has been determined. McPherson said the Indiana State Fire Marshal would survey the property on Monday.