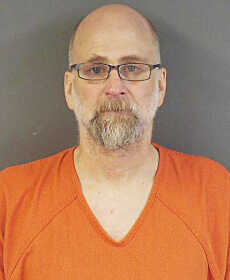 With an eye toward a recent tragedy in Indianapolis, local officials are taking steps to avoid a similar outcome in Putnam County.

On Wednesday, the Putnam County Prosecutor’s Office took the first step toward keeping guns out of the hands of Bradley Branneman, who is accused of shooting out the windows of a car and then falsely telling police he had killed between four and eight people.

The matter before Senior Judge Raymond Kirtley, sitting in Putnam Superior Court in place of Judge Denny Bridges, was a petition for the retention of the firearm involved in the Monday, May 3 incident.

Though represented by Eddie Felling in the criminal matter, Branneman appeared without an attorney in this hearing, which is a separate civil matter.

Branneman was calm and collected in court and reacted little when the judge explained the nature of the hearing.

On the stand, though, Cloverdale Town Marshal Steve Hibler told the court of the different version of Branneman he encountered on May 3.

Around 1 p.m., the police received a call of a man who had walked out of a Lincoln Avenue home and fired a shotgun into a Cadillac CTS before going back inside.

When Hibler and CPD Sgt. Adam Hull arrived on the scene, they prepared for the worst as Hibler commanded the man to come out. He said Branneman came out with the gun across his body, finger near the trigger.

“I told him to put the gun on the ground probably six, seven times,” Hibler said.

Branneman slowly complied, the veteran police officer explained, before picking the weapon back up. After two more commands, he put it down for good.

The situation got even more troubling, though, as police got Branneman into custody.

Hibler said Branneman told him there were four more people in the house, “but they’re dead.”

At that point, multiple police, EMS and fire agencies were mobilized.

“That started the ambulance, it started all the medical protocol for a mass casualty,” Hibler said. “Everybody got the cavalry call.”

As officers continued to talk to Branneman, he said there were four more dead — two in the car and two more at another residence in town.

A check of both residences and the car revealed that there were no casualties but also gave officers insights into the defendant’s state of mind.

At one point, Branneman was still claiming that his brother was dead, even though he had actually arrived at the scene.

“He kept telling me that Jeff was dead,” Hibler recalled, “and I said, ‘There’s Jeff right there.’ And he said, ‘No, Jeff’s dead.’”

While there was no further testimony at the hearing, the filing was supported by several witness statements as well as one from Branneman’s brother.

“I do not feel my brother should own or possess any firearm at least until he has shown no violent tendencies for at least five years,” Jeffery Branneman wrote. “If he was violent only because of a medical condition that was no fault of his own and can be cured, I believe he should be able to regain his rights after he is cured.

“If his violence was the result of a self-induced drug reaction,” the brother continued, “then he should never be able to own a gun again.”

Court documents also indicate that Jeffery Branneman told investigators he had taken his mother out of the home she shares with her younger son earlier on the day of the incident after finding Bradley “incoherent, confused, delusional.”

Bookwalter reminded everyone in the courtroom of the timeliness of this matter.

The prosecutor was referring to the April 18 shooting at a FedEx Ground facility in Indianapolis, in which 19-year-old Brandon Hole killed eight others before taking his own life.

There had been previous signs of trouble with Hole and authorities invoked the state’s Red Flag Law — named for slain Indianapolis Police Officer Jake Laird — to seize Hole’s shotgun.

Unfortunately, the matter was taken no further and Hole was able to legally purchase the guns used in the FedEx tragedy.

Judge Kirtley explained that Wednesday’s hearing is only a first step, the next of which will be a Wednesday, May 26 evidentiary hearing.

“I did review the file before I came in,” Kirtley said. “There has been a sufficient showing for probable cause for the firearm retention that’s been set out in the petition.”

While such orders sometimes also involve the disposal of the guns involved, that was not the step Bookwalter was petitioning the court to take.

“At this point, it’s not being destroyed,” Kirtley explained. “It’s just being retained until further notice.”

For now, Branneman remains lodged at the Putnam County Jail, where he has been since May 3. Even if he should post his $10,000 cash-only bond, Wednesday’s hearing ensures the shotgun will remain in possession of the Cloverdale Police Department for the time being.

Beyond that, Branneman’s future ability to legally buy or possess firearms will likely hinge on the outcomes of both his criminal case and this civil matter.

Besides the May 26 evidentiary hearing, Branneman is due back in court for a July 6 pre-trial conference in the criminal case.