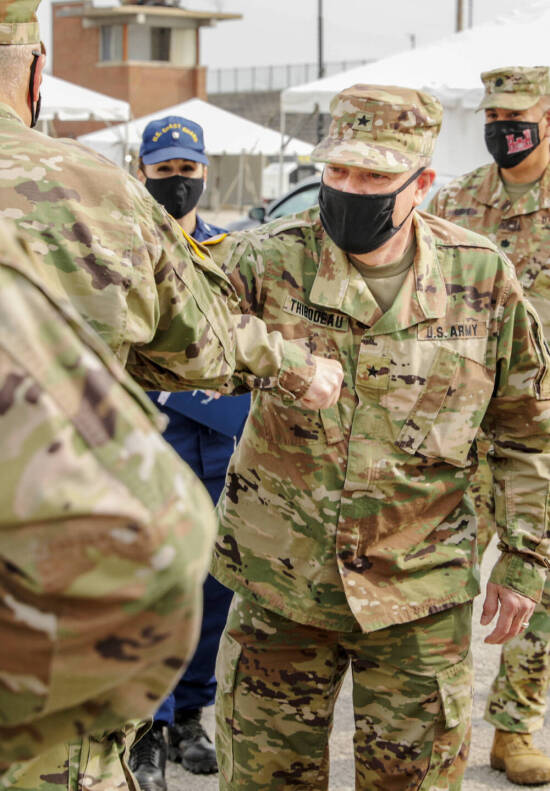 U.S. Army Brig. Gen. Patrick Thibodeau, dual status commander for the state of Indiana, greets Department of Defense personnel at the state-led, federally-supported Community Vaccination Center (CVC) in Gary. The CVC has the capacity to administer up to 3,000 vaccinations a day to both drive-up and walk-in community members. U.S. Northern Command, through U.S. Army North, remains committed to providing continued, flexible Department of Defense support to the Federal Emergency Management Agency as part of the whole-of-government response to COVID-19.
Courtesy United States Army

The goal of this legislation was to streamline civil support operations and establish a unified front between the National Guard and active-duty forces.

Since 2004, dual status commanders have been authorized to command nationally significant events such as summits and national political conventions. However, in more dire situations these dual-hatted commanders led troops during earthquakes, wildfires and hurricanes like Katrina and Sandy.

One such dire situation has been the current COVID-19 pandemic and the testing and vaccination efforts associated with it.

In 2020, now-retired Brigadier General David N. Vesper was also granted consent but was never activated for the position.

“Based on the history of Indiana never having used this process and the size and capability of the Indiana National Guard, I thought it was highly unlikely that anyone would ever need to serve in this role,” Thibodeau said.

“While I never expected that I would have the opportunity to serve in this role,” the Greencastle city building commissioner said. “It is a privilege to serve my fellow Hoosiers by providing unity of command between Department of Defense forces and National Guard forces working on the ground to provide our citizens with lifesaving COVID-19 vaccines.”

Thibodeau began his military career in 1989. He deployed to Iraq in 2008 in support of Operation Iraqi Freedom with the 76th Infantry Brigade Combat Team.

“The benefit of being one of the old guys in uniform is you have a lot of experience,” Thibodeau said. “The breadth of my experience includes working with leaders from all levels of the government. Perspective and the ability to identify with everyone in the response is a big deal.

“When you understand everyone's view and you have experienced based insight into the cultures of different organizations you know how to make big impacts sometimes with the smallest efforts. It’s like being an experienced euchre player that doesn't have to think about what card to lead next, it becomes intuitive.”

At Roosevelt High School in Gary, military personnel, who Thibodeau leads, work with Federal Emergency Management Agency personnel, and together they retain the capability to administer around 2,000 COVID-19 vaccines daily. With the site's close proximity to Chicago, the vaccinators see a heavy mixture of Illinois, Michigan and Indiana residents.

"The mission to provide equitable vaccine distribution is important nationwide, but especially here in Gary given the social vulnerability of the residents," said Kevin Sligh, an acting regional administrator for FEMA’s Region 5. "By working with the Department of Defense, the state of Indiana and local partners, we are able to make sure that everyone in northwest Indiana who wants a shot can get a shot.”

"The use of the dual status command construct in the context of the COVID-19 response efforts has been truly historic, and invaluable to ensuring the efficient and professional administration of the COVID-19 vaccines," said Maj. Gen. Pablo Estrada, Task Force C/W46 commander. "I've been lucky to work alongside the capable and hardworking service members of the Indiana National Guard, who have given so much to help Indiana work to overcome the pandemic and return to normal."

The goal of creating dual status commanders was to streamline civil support operations and establish a unified front between the National Guard and active duty forces. By doing so, challenges usually associated with bilateral missions can be mitigated.

“I would say I have had absolutely no challenges leading active and reserve forces during this event,” Thibodeau said. “We are so fortunate to have intelligent, hardworking, engaged, committed and professional men and women in our services today.

“The tip of the spear in this operation is the Indiana Department of Health, an organization that has displayed unparalleled commitment to the health and safety of our communities,” he added. “Supporting their efforts and putting our communities first by ensuring there are no barriers to being vaccinated has been one of the most rewarding things I have ever been a part of.”