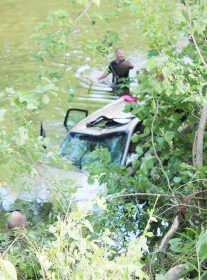 A car crash into a creek Monday evening quickly turned into something more.

Two male occupants of the car fled across Big Walnut Creek into the DePauw Nature Park, leaving behind the female occupant who escaped the car with injuries and was transported from the scene by ambulance.

The incident occurred around 6:20 p.m., with multiple agencies responding to the area of 1967 S. CR 200 West (Creek Road) where the car was down a 30-foot embankment and in the creek.

It was reported that there were three occupants.

However, responders arrived to find only the juvenile female occupant. A StatFlight helicopter was initially called as responders, including the Greencastle Fire Department, Madison Township Fire Department and Putnam County EMS, searched the water for the two males.

When they realized the two males — one juvenile and one 23-year-old — were not in the water, law enforcement began searching the area, including the DePauw Nature Park, which is immediately across the creek from the scene.

Shortly before 7 p.m., an Indiana Conservation Officer located the two males near the Putnam County Highway Department on County Road 225 South, at least a one-mile hike across the nature park.

None of the names of the subjects has been released.

Though it took finagling, Seniour’s Towing retrieved the vehicle up the 30-foot embankment from the creek.

The incident remains under investigation, including why the occupants fled. A PCSO spokesman said that intially none of the three would admit who was driving when the car crashed.

Deputy Robert Soilleux is investigating the matter for the sheriff’s office.