Occupants but not driver ID’d in crash into creek 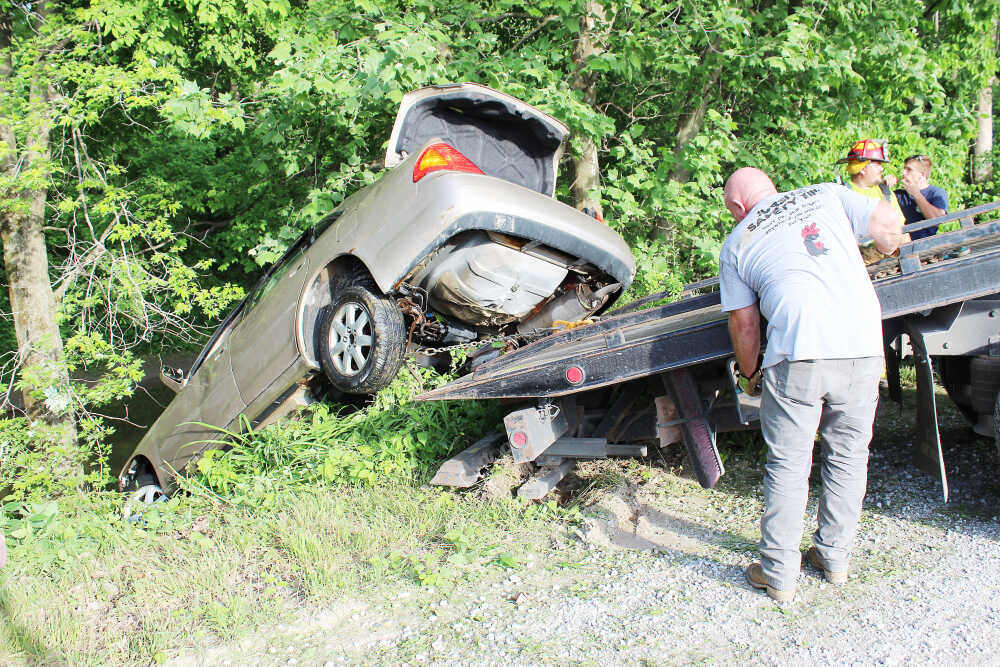 There were definitely three people in the car that crashed into Big Walnut Creek Monday.

And all three of them got out without major injury.

As to who was driving? That’s about as clear as the creek at flood stage.

In the car at the time of the crash were Kimberlee Kirby, 17, Tommy Lemons, 23, and Cody Smith, 14, all of Greencastle.

Soilleux reported being notified of the crash at 6:24 p.m. and arriving one minute later. Based on marks on the gravel road, the 2002 Toyota Avalon had been southbound on Creek Road (County Road 200 West) when it began to fishtail, going back and for the across the road before leaving the east side of the road and plunging down the 30-foot embankment.

After hitting several trees and shrubs, it came to rest upside-down in about four feet of water.

Kirby told Soilleux she had been able to get out of the car and wasn’t sure about the others, though she believed someone was getting out as she was running for help.

Lemons and Smith apparently fled across the creek and into the DePauw Nature Park. They were located shortly before 7 p.m. by an Indiana Conservation Officer in the area of the Putnam County Highway garage on County Road 225 South, at least a one-mile hike from the site.

As to who was driving, Kirby says it was Lemons, but Lemons and Smith say it was Kirby.

Kirby and Lemons both claim to have been in the back seat, while Smith said he was asleep in the passenger seat.

The car is registered to Rebecca Benson of Greencastle, who shares Kirby’s address.

Two of the three say drugs and alcohol were a factor, while the third denies that any substances were involved.

Kirby reported having pain all over, saying she had been thrown around in the car since she was not wearing a seatbelt. Putnam County EMS transported her to Terre Haute Regional Hospital.

Smith said he was having trouble breathing and was taken to Riley Children’s Hospital in Indianapolis.

Lemons said he was not injured.

As of Wednesday morning, there had been no criminal charges filed in the matter.