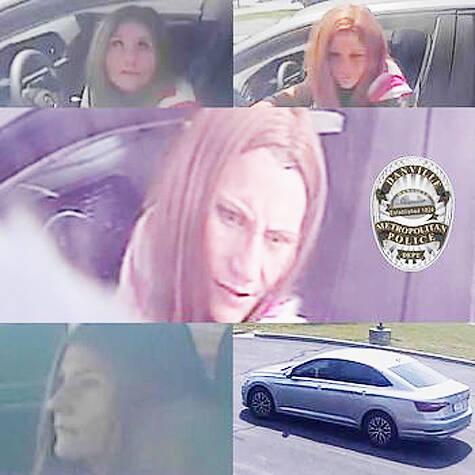 DANVILLE -- The Danville Metropolitan Police Department is asking for the public’s assistance in identifying an individual wanted in connection with a theft and fraud investigation.

Back on May 22, an unknown individual reportedly smashed out a car window, stealing a woman’s purse at the soccer fields on CR 200 South in Danville.

Authorities said no suspicious activity had occurred on the woman’s bank account until June 18.

On that date, the woman shown in the photos provided by police, utilized the victim’s checks and driver’s license to make withdraws totaling more than $10,000 at four different banking locations. The banks were located in Greencastle, Clayton and Plainfield.

The woman either has red hair or is wearing a red wig in some of the photos. No information was available on her possible age.

The suspect appears to be driving a silver sedan, Det. Nate Lein noted.

Anyone who might know who the woman is asked to contact the Danville Police Department’s 24-hour anonymous crime-tip line at (317) 745-3001 or Crime Stoppers of Central Indiana (reference case HP21-4070).