Johnston: Tiger Pointe to be another community asset 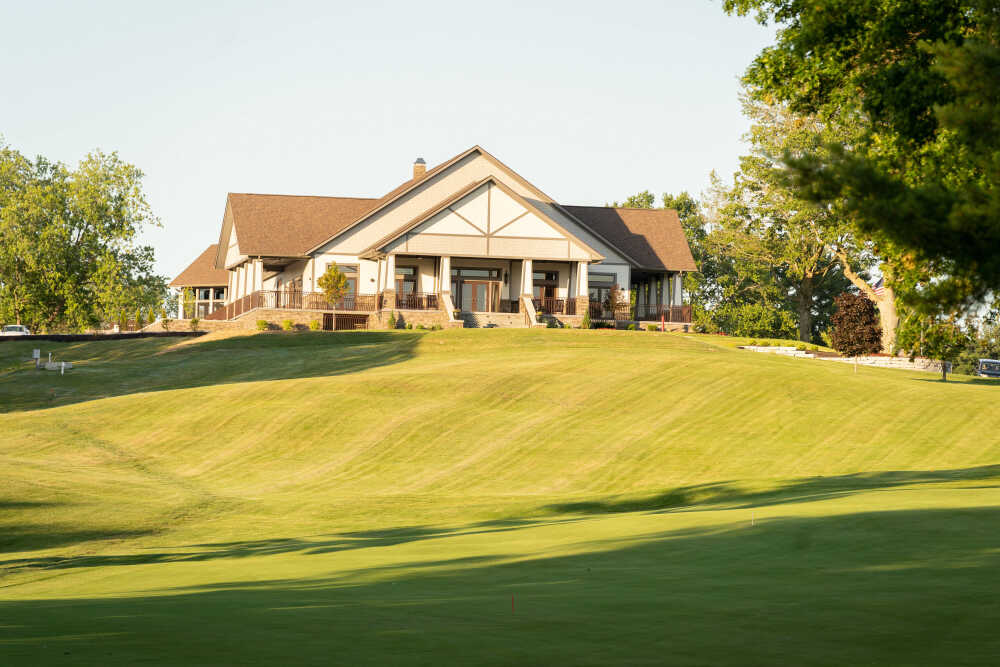 A reinvention of the former Windy Hill Country Club, the newly-opened Tiger Pointe Country Club has developed into a space that can host different kinds of events up to 200 people.
Courtesy Joel Bottom

When Lee Tenzer purchased the former Windy Hill Country Club in the spring of 2018, the move was seen as an opportunity to keep the golf course viable for Greencastle and Putnam County.

“A community is as strong as the opportunities it offers its citizens,” he said then. “Losing the golf course that has served this region for more than 60 years was something I did not want to see happen, as it is an important asset.”

Tenzer promised to bring “new life” and a new name to the property. A little more than a month into its being open, the end-goal is for Tiger Pointe Country Club to be available to the community as a whole.

Windy Hill was established in the mid-1950s as what Chris Johnston, the portfolio manager for the Tenzer Family Office, saw as a family-oriented but golf-centric club. However, it was not built for larger events and was mainly for its private membership.

The club had been struggling financially prior to its being acquired by Tenzer, a 1964 graduate of DePauw University who has made other investments in Greencastle. It was recognized that major improvements were needed, and Tenzer was committed to creating an open venue with a private-club atmosphere.

Todd Scoggins of Scoggins Design, which has been involved in other projects locally, was tapped as the architect for the new event center. Demolition of the old building then began in February 2019.

Johnston said the new iteration took about a year to complete from its design stage to its opening. This was barring weather delays, some supply-chain issues and the economic and social slowdown brought on by COVID-19. 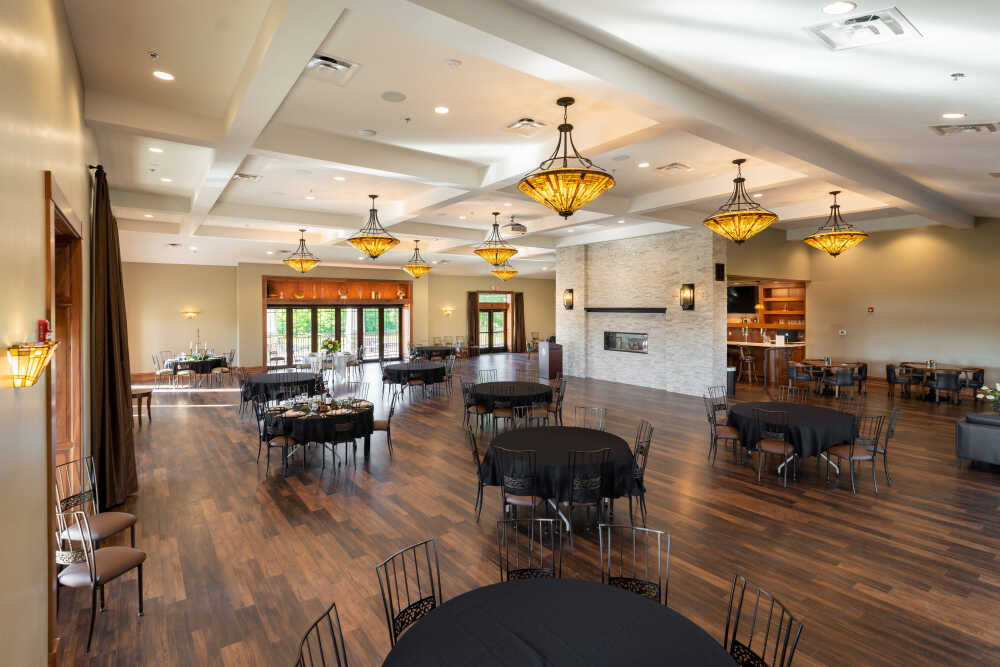 Complete with a bar, the main event space available for weddings and other gatherings is about 4,000 square feet.
Courtesy Joel Bottom

“I say that if we opened this nine months ago, we couldn’t have used it; and if I started building it today, I don’t think I could build it,” Johnston said. “The blessing of all this is that people are now starting to realize that they can get out and do things.”

The main event space is just under 4,000 square feet. The building is ADA-accessible and has newly paved parking. It also has wireless one-gig internet capability as well as a pro shop. Ultimately, the property can support events with up to 200 people.

“It is what it is,” Johnston said. “It’s a more elegant place. It’s, I guess, a more formal place. But it’s also so adaptable with audio-visual, opening all the windows and doors, the use of the outside.

“That’s the best sunset in town out there,” he added about the balcony.

As an independent entity not owned by the university and open to the public for both golf and event rental, Johnston said the business is free to do what it wants and needs to do when it needs to do it.

Besides hosting fraternity and sorority events, weddings and other gatherings, Tiger Pointe as a regional draw for corporate events has as-of-yet untapped potential. As such, there is anticipation that it will eventually be open mid-week as well as on the weekends.

Johnston, a 1983 DePauw alumnus who lives in Greencastle, acknowledged sentiments that the university has “taken over” the city politically and commercially. For him, Tiger Pointe and Tenzer’s investments show a common thread behind making Greencastle a destination.

“I see the license plates,” Johnston said of the downtown scene. “We’re drawing people in from Terre Haute and Plainfield, and we see that as an extension here. We know that the more people see and experience this town, the better they’ll feel about it.” 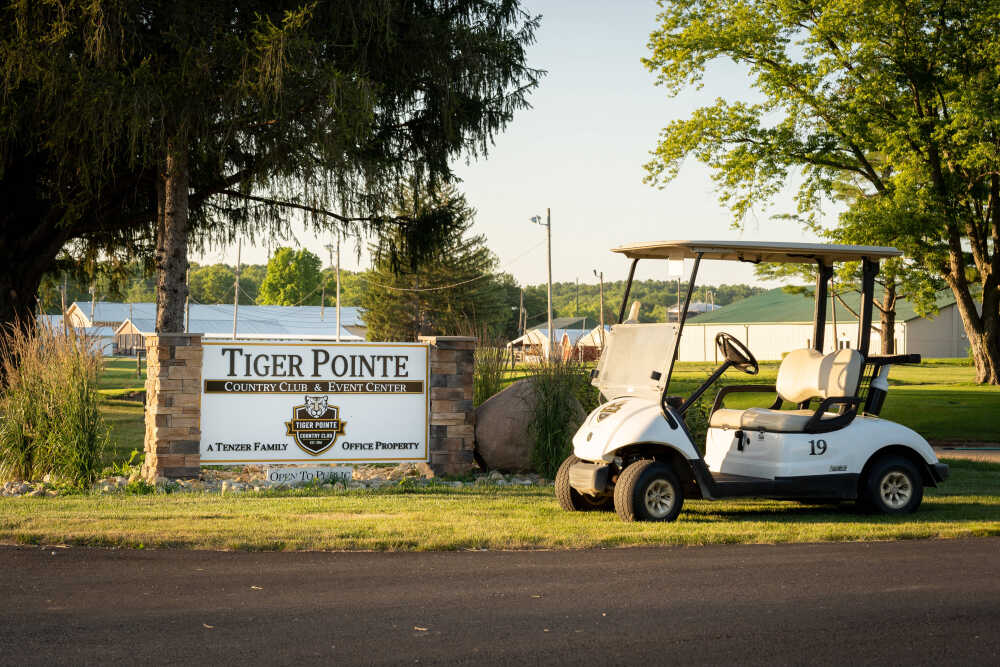 Stressed as an independent entity owned by the Tenzer Family Office, Tiger Pointe Country Club is open to the public for both golf and event rentals.
Courtesy Joel Bottom

Tenzer led the development of the Tenzer Hub for Entrepreneurship, a working space on South Indiana Street in downtown Greencastle. He also owns the building across the street and leases its ground-floor space to TapHouse Burgers.

At DePauw, the Tenzer Technology Center was made possible with a $10 million gift through the Tenzer Family Foundation. Johnston also noted that Tenzer is currently the major donor for the renovation of Roy O. West Library.

These investments in both the city and the university are part of what Johnston calls a “community impact portfolio.” He provided that the cost of building Tiger Pointe will never be fully recaptured.

“(With) what the (Green family has) done with Bridges and what Lee Tenzer’s done with his properties around here, the goal is to improve and enhance the town which supports the gown,” he said. “(Tiger Pointe) is a great community asset; it’s not some money-grabbing idea.”

For Johnston, all of what Greencastle has to offer with such investments make it and the county a better place to live, work and play in as a whole.

“This is about a different form of philanthropy,” he said. “It’s elevating the place, providing more assets, making the place more appealing for people who might want to come here or people who are here, so they have something they can be proud of.”