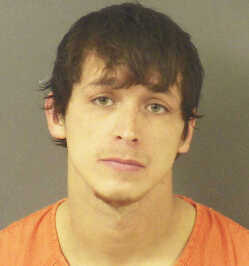 The question of exactly when a Greencastle woman died in late January 2020 became a bit clearer in court testimony on Tuesday.

The murder trial of John Gonzalez, 30, Greencastle, continued with more testimony from prosecution witnesses, including that of forensic pathologist Dr. Roland Kohr.

Kohr told the jury in Putnam Superior Court of the findings of his autopsy on 44-year-old Melissa “Lisa” Attkisson, whom Gonzalez is accused of killing at her Berry Street home.

Under questioning by Putnam County Prosecutor Tim Bookwalter, Kohr testified that Attkisson had suffered both a gunshot wound to her abdomen and blunt force trauma to her head.

Kohr further asserted that bleeding in one of Attkisson’s kidneys would have killed her if her severe head injuries had not done so first.

Through the line of questioning, the prosecution seemed to be establishing a timeline for Attkisson’s death, which is believed to have taken place on Saturday, Jan. 25.

On Monday, a video and two photos taken from a phone Gonzalez later sold at a Terre Haute Walmart showed that Attkisson was still alive, with the gunshot wound, as of 11:26 a.m.

She did not, however, appear to have the head injuries that investigators discovered when her body was found three days later.

Kohr’s testimony backed up this observation, as he indicated that Attkisson could not have been conscious and speaking, as she was in the video, considering the extent of injuries to her brain and skull.

“A degree of force to cause skull fractures is far beyond where we see loss of consciousness,” Kohr said.

Furthermore, Kohr noted that the kidney injury would have caused a person to die from the hemorrhage in an hour or two, yet only six or seven ounces of blood was found around the organ.

“In my opinion, the immediate cause of death was blunt force trauma,” Kohr said.

A later question submitted by a juror asked how much time passed between the gunshot and the blows to the head.

Kohr said this was hard to determine, that it could have been less than 10 minutes but as long as 30.

“It wasn’t like it was a day later?” Bookwalter asked.

Kohr’s testimony runs counter to defense claims, introduced in Monday’s opening argument, that Attkisson was shot accidentally after she pulled her 9mm pistol on Gonzalez and the two struggled over the weapon.

Kohr even addressed the nature of the gunshot entry wound on the front of Attkisson’s abdomen, saying it was likely the gun was fired from more than 18 inches away, inconsistent with a struggle.

Photos from Kohr’s examination further introduced jurors to the brutality of what Attkisson suffered, saying the fractures to her skull were consistent with those suffered in motor vehicle collisions.

Kohr also noted the toxicology findings from his investigation, which included amphetamine and methamphetamine in Attkisson’s blood. On cross examination from defense attorney Jim Bruner, Kohr called the level of methamphetamine “significant,” but said he has seen higher.

As noted earlier by the defense, Kohr also discovered fentanyl, but only in the urine, which likely did not indicate recent use.

Much of Bruner’s cross examination centered on matters of rigor mortis and decomposition, neither of which would have been consistent with the time between the estimated time of death around Saturday midday and the discovery of the body late Tuesday night.

However, the extremely low temperature in the house, noted by more than one witness on Monday, would have slowed or perhaps stopped some of these effects.

Kohr was actually the second witness of the day on Tuesday, following retired Putnam County Coroner Dave Brown, who arrived at the scene on the morning after the body’s discovery.

Brown noted that his initial report indicated that Attkisson had been dead for between 12 and 24 hours, but no one had notified him of the cold conditions in the house.

Brown also initially listed the cause of death as the gunshot wound, but he noted the head injuries.

Once his report was complete, though, Brown said he deferred to the more highly-trained Kohr, whose examination was much more extensive.

“That’s why we have a pathologist to follow us up and we refer our cases to the pathologist,” Brown told Bruner.

Later in the day, ISP Forensic Scientist Robert Dilley told of his lab’s findings regarding a 2x4 board and a piece of particle board found behind Attkisson’s head.

Both items were confirmed to be blood-stained, and likely contained Attkisson’s DNA. The 2x4, meanwhile, also likely contained Gonzalez’s DNA, while DNA was not found to match Gonzalez on the particle board.

On cross examination, Dilley said this did not preclude Gonzalez from having handled the particle board.

Additionally, samples taken from the apparent blood spot on the tongue of Gonzalez’s shoe appeared to contain DNA from both he and Attkisson.

The rest of the day’s testimony centered on tracking Gonzalez’s movements and communications in the days surrounding Attkisson’s death.

Testimony from John Mullens, who called Attkisson his best friend, indicated how tempestuous the relationship between Attkisson and Gonzalez had been during their first breakup a few weeks before her death.

“It got kind of ugly for a couple of days,” Mullens said. “He made phone calls, threatened me and everybody else, if she didn’t call back.”

On cross examination, though, Mullens admitted he had never seen Gonzalez lay a hand on Attkisson.

“They had a lot of verbal arguments but I never saw him be physically abusive to her,” Mullens said.

Testimony from Indiana State Police Sgt. Sam Stearley, who took the stand once on Monday and twice more on Tuesday, further established the nature of the relationship leading up to Attkisson’s death.

While the two had reconciled, text messages recovered from Gonzalez’s phone indicated they were breaking up again in the early morning hours of Jan. 25.

“I’m sorry,” Gonzalez texted. “I made a mistake coming back here.”

A series of texts ensued, with Gonzalez saying he would find somewhere else to go, but just wanted to “go to the basement and listen to music” for the time being.

A disagreement seemed to arise over the ownership of some items, but these were among the last texts exchanged before Attkisson’s estimated time of death.

Several other witnesses also established Gonzalez’s movements in the hours and days after he left Greencastle in Attkisson’s 2016 Ford Escape.

Friend Greg Harris said he stopped by his home in Seeleyville in an attempt to sell an iPhone, appearing “in a hurry and fidgety.”

Dabryn Tanner of Brazil testified that she had begun talking to Gonzalez via Facebook Messenger on Jan. 24 and they met in person on Jan. 25, quickly establishing an intimate relationship and traveling together for about a week around Western Indiana, Illinois and even into Missouri at one point.

Friend Charles Richardson of Attica testified that he saw Gonzalez several times in late January, selling a pistol for him that matched the description of Attkisson’s pink and silver 9mm. Richardson said he traded the gun in Danville, Ill., for five bags of crack.

Both Richardson and Tanner described behavior indicating Gonzalez did not want to be discovered, such as avoiding main highways and wanting to hide the vehicle wherever he parked.

A cell phone “pinging” expert, Alspach established that the two phones — Gonzalez’s LG and Attkisson’s iPhone — began moving west together from Greencastle toward Terre Haute on the afternoon of Jan. 25, while that of Colton Croan, Attkisson’s ex-boyfriend and the other initial suspect in the murder, stayed around Fillmore the whole day.

Various pings at particular times matched those of receipts on Attkisson’s credit and debit cards in locations such as Brazil, Terre Haute, Georgetown, Ill., Kirkwood, Mo., and Sunset Hills, Mo.

During further testimony from Stearley, footage from security cameras in several of these locations further established Gonzalez’s presence.

Deputy Jordan Johanson and Investigator Nick Sanchez of the Rock Island County, Ill., Sheriff’s Department testified about the discovery of Attkisson’s stolen vehicle, stuck in a field along a country road on Feb. 3.

They discovered Gonzalez nearby soon thereafter, wearing Air Jordans that appeared to match those in the cell phone video of Attkisson, and took him into custody.

One final approach by Bookwalter during day two was trying to establish Gonzalez’s state of mind on Jan. 25.

In one of Stearley’s turns on the stand, a text message at 2:55 p.m. from Gonzalez’s phone to Attkisson’s was noted.

“U feeling any better,” Gonzalez texted. “I figured u were sleeping.”

Bookwalter noted that video from 3-1/2 hours earlier pulled from the same phone showed Attkisson seriously wounded by a gunshot.

“Mr. Bruner said in opening argument that he (Gonzalez) panicked,” Bookwalter said. “Does that show you that someone who’s trying to cover their tracks is panicking?”

“It does not look like he’s panicking,” Stearley said.

Furthermore, testimony from Alspach established that both phones were in the Terre Haute area at the time of the message.

Additionally, a message from Attkisson’s phone to Mullens around noon seemed suspicious.

“Heading to Terre Haute for the night,” the message read. “We will be back tomorrow. Wanted you to know the doors would be locked.”

However, Mullens testified that Attkisson had given him a key to the house weeks earlier after Gonzalez left the first time, rendering the part about the locked doors moot.

“She wouldn’t have put that the doors would be locked because she knew you had a key,” Bookwalter said. “That would tell you not to come by.”

ISP Sgt. Brandon Mullen, crime scene investigator, also testified about notes he found when he searched the Ford Escape after its return from Illinois.

When testimony ended after 4 p.m. Tuesday, the prosecution had not rested, though its case appears to be winding down.

Once the prosecution rests, the defense will have the chance to present its case, though head defense attorney Jim Hanner — who has deferred nearly all speaking to Bruner due to a medical issue — has indicated there will be far fewer witnesses than the prosecution.

Bookwalter and Deputy Prosecutor Austin Malayer have called 22 different people to the witness stand, including three appearances by Stearley and two by Mullen, as well as introducing nearly 150 exhibits.

Should the defense also complete its entire argument on Wednesday, the proceedings will move on to final arguments before Judge Denny Bridges turns the case over to the jury with final instructions.

The case was given a full week on the court calendar, though the judge and attorneys have remained hopeful it could be completed by Thursday or possibly Wednesday.