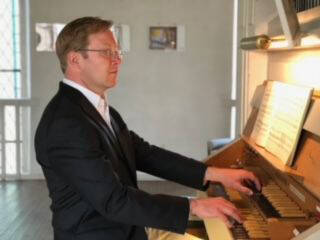 Gaudecker is a native of Hanover, Germany, and studied sacred music at the Hochschule für Musik in Weimar, Hamburg and Lübeck.

After receiving a master’s degree, he went on to study at Martin Luther University of Halle-Wittenberg and at the Hochschule für Musik in Leipzig, where he earned a master’s degree in music pedagogy and an artist diploma in organ.

As a recitalist, Gaudecker has performed in Germany, Austria, Poland, the Netherlands and the United States. Since 2017, he has served as the music director at St. Andrew’s.

The concerts will be at 4 p.m. and be free and open to the public. Space will be limited and attendees will be asked to wear masks at the events.

Those interested in attending are asked to either call the church office at 653-3921 or send an email to standrewsgreencastle.com to reserve a seat.