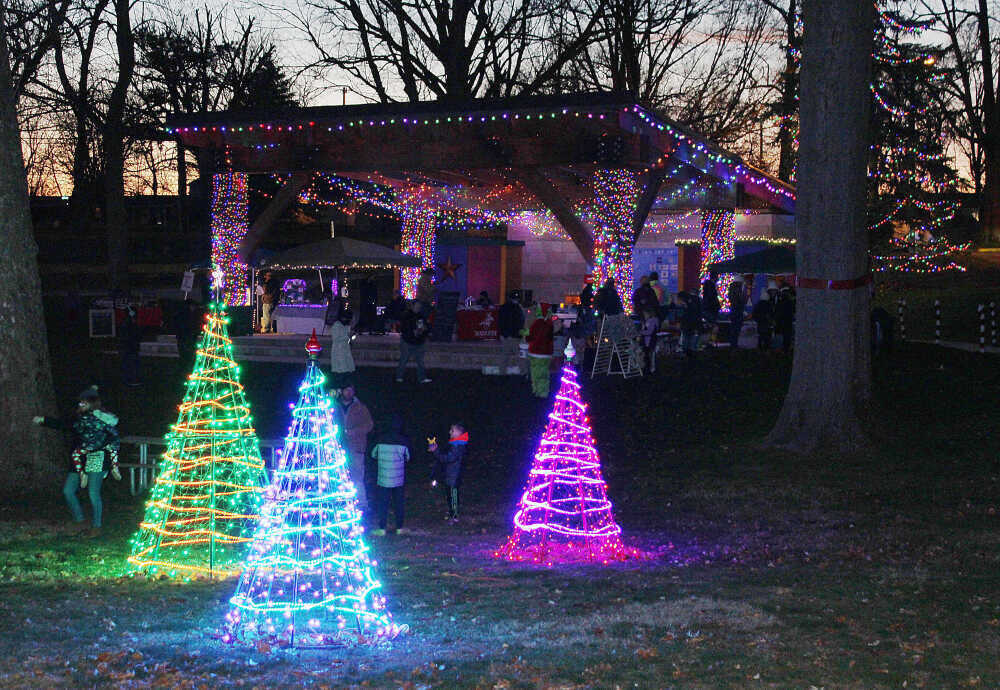 Robe-Ann Park was decked out with thousands of lights for the 2020 holiday season, thanks to the Greencastle Civic League with support from the Greencastle Parks Department and the Putnam County Convention and Visitors Bureau.
Banner Graphic/BRAND SELVIA

Meteorological summer may be over. It’s too late for Christmas in July. And Labor Day is at hand ... but thoughts turned to Christmas at the September Park Board meeting.

Proposed dates for the project, which lit up Greencastle’s Robe-Ann Park with more than 25,000 lights last winter, are Saturday, Dec. 4-Thursday, Jan. 6.

According to an email from Kate Knaul of the Civic League, who shepherded last year’s successful efforts, the organization and volunteers “anticipate installing the lights in mid-November with a similar installation to last year with a few additions.”

The Greencastle Civic League has coordinated the initiative, in collaboration with the Putnam County Convention and Visitor Bureau and in partnership with the Parks and Recreation Department. Volunteers from the Civic League did much of the heavy lifting, providing most of the more than 25,000 lights and workers to help put them up ... and take them down.

The inaugural event was the culmination of several years of hopes and dreams of the Park Board and others of staging a holiday lights display at the park, often citing the Danville park as an example of what could be done.

Now it’s time to start thinking about doing it all over again.

“Around Halloween, we’ll start preparing the lights that were put away after last year, checking for breakage,” Park Director Rod Weinschenk told the board while noting that the Park Department recently received a shipment of a couple of large boxes of lights ordered by the Civic League to augment what it had last year.

The Civic League again expects to hold several events in the park during the Winter Lights Festival, including Santa in the Park (an event taken over from Main Street Greencastle), a winter market (to be moved to shelterhouse No. 2 adjacent to the skatepark to allow more room for vendors) and an appearance by the Covered Bridge Chorus again this season.

“We’ve discussed several other event ideas and are currently exploring those,” Knaul’s communique added. “We expect these would take place during the weekends, but we will work with the Parks Department staff to coordinate times and use of facilities.”

It remains the Civic League’s intention to keep the event free of charge to the public. As it did last year, it will ask those willing to make a cash or non-perishable food donation.

Cash donations allow the Civic League to maintain and/or expand the lights. Non-perishable food items will be taken to the Putnam County Emergency Food Pantry.

“We are grateful to our past and current donors to make the lights possible,” Knaul added. “We welcome individuals, groups or businesses interest in supporting the festival either with financial donations or volunteer help.”

Anyone desiring more information about the festival or wishing to volunteer or make a donation may contact Kate Knaul at greencastlecivicleagueinc@gmail.com.

In other business, the board:

-- Heard Weinschenk report that he got up close and personal with a paper wasps nest while mowing at Big Walnut Sports Park recently. While mowing beneath a pine tree, he looked up to see he was face to face with the live nest about four feet away. “I was lucky I could back up and depart before the wasps knew I was there,” Weinschenk said, adding it was one of the scariest moments of his life. Somehow he managed not to get stung and had the nest removed. There might be good news in his story as well. “Since the nest is located so close to the ground, an old farmer’s tale states that we are in for a mild winter with little snow, otherwise they’d have built it up higher,“ the park director said.

-- Heard Mayor Bill Dory report that the sidewalk project on the Wood Street side of Robe-Ann Park is about 95 percent complete as work also continues along the Tennessee Street side, where the project was delayed a bit until Duke Energy was able to move its power poles from the right-of-way. “It’ll be a nice improvement,” the mayor said, adding that “with the brown poles down, it’ll be much easier to mow now.”

-- Heard Weinschenk report that Mammoth Construction is in the midst of repairing the doors on the front of the aquatic center and those to the pool side. Boyle Construction, meanwhile, completed its last task, making a stainless steel rail repair, while Graves Construction is due to provide winterization instruction for the water slides.

-- Authorized use of the People Pathways section from the trail head gazebo near Ascena to Fillmore and back for the Saturday, Oct. 9 Mental Health America 5K. Registration begins at 8 a.m. with the event starting at 8:30.

-- Learned that the Fall Coed Softball program will begin Tuesday, Sept. 7 with an eight-team league playing Tuesday and Thursday nights. With a 12-game schedule, the league is expected to play until near the end of October.

-- Heard Weinschenk report that the park staff has monitored shelter usage throughout the park system and continues to see morning and afternoon work meetings, noon family gatherings and picnics and more outdoor social gatherings using the shelters at Robe-Ann and Big Walnut Sports Park, calling it “one positive element” of the COVID-19 situation.

Weinschenk was joined for the September meeting by board President Cathy Merrell and members Tim Trigg, Pete Meyer and Joanna Muncie.

The next regular session of the Greencastle Park Board is set for 7 p.m. Wednesday, Oct. 7 at City Hall.