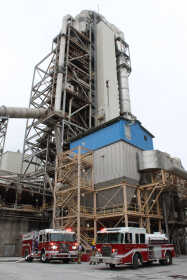 An engine from the Greencastle Fire Department and a tanker from the Reelsville Volunteer Fire Department stand as firefighters work to cool down a storage tank at Buzzi Unicem on Saturday.
Banner Graphic/BRAND SELVIA

No injuries have been reported following a heat incident at Buzzi Unicem which scrambled multiple fire departments to the plant on Saturday.

At about 8:50 a.m., a box alarm was activated after staff at the plant reported a hot spot that was causing a storage tank’s exterior to exceed its normal operating temperature. Efforts to cool down the tank continued into the afternoon.

The Greencastle Fire Department responded with an engine, its rescue truck, its hazmat truck and its aerial truck, with this being the latter’s first run since it was delivered last June.

The Clinton, Cloverdale and Madison Township volunteer fire departments each responded with a tanker and an engine, while the Bainbridge, Floyd Township, Jefferson Township and Reelsville volunteer crews came with tankers. Putnam County EMS was also at the scene.

Greencastle Fire Capt. Kenny Shepherd told the Banner Graphic Saturday evening that water was pumped into the top and bottom of the storage tank from both GFD’s rescue truck and the aerial truck. He estimated that 70,000 gallons were used to gradually cool it down.

Shepherd related that the material inside the storage tank was flammable, and that personnel were concerned about introducing air into it. While it was hot, it is undermined whether there was a fire inside the tank.

When the storage tank was finally cooled down, command was terminated at about 2:55 p.m.

According to a press release by the plant, the storage tank contained material used in an alternative fuels program as well as its cement manufacturing. Providing that it is permitted by “applicable governmental authorities,” it states that waste materials are recycled by using them as a fuel replacement to heat the plant’s cement kiln and preheater calciner.

“The material has been stabilized and the tank has been removed from service,” the release states. It also notes that none of the material was released from the storage tank and that its operations were uninterrupted.

The plant employees more than 180 people and mainly produces Portland cement, which is a basic ingredient in concrete, mortar and stucco.