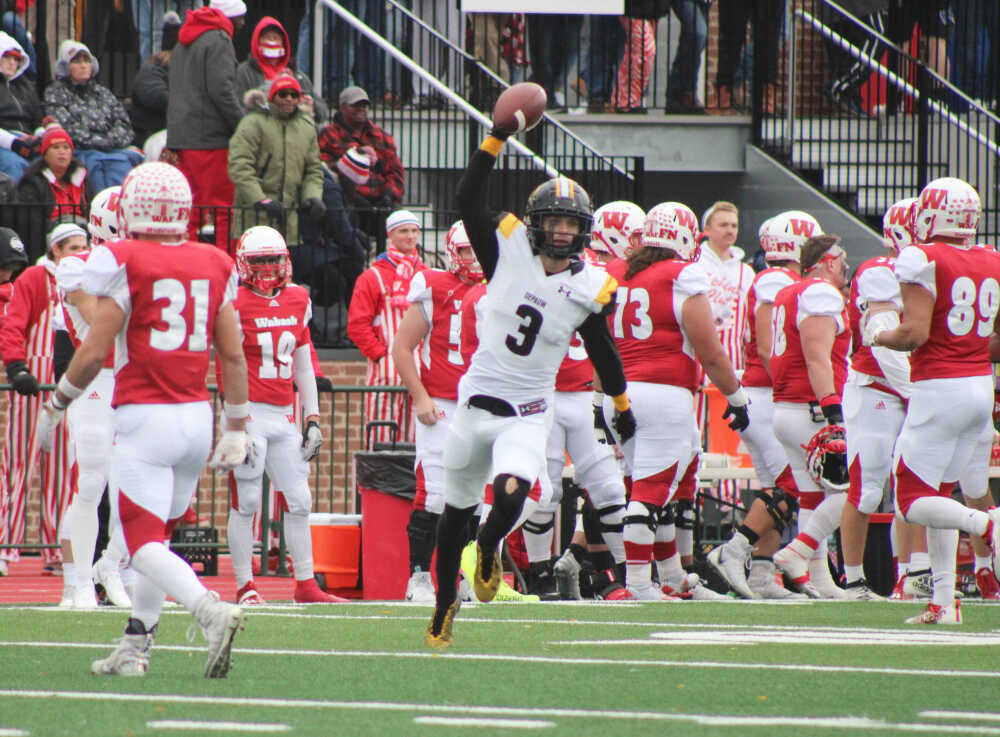 DePauw’s defense, which was able to run its interception streak to 12-straight games but was also rolled up late by Wabash, will have to contend with an equally strong offense in Rose-Hulman Saturday in the first round of the NCAAA Division III Football Playoffs.
Banner Graphic/JARED JERNAGAN

A tough loss to Wabash last week in the Monon Bell Game might have otherwise been a dour closing note on the football season for DePauw.

But the Tigers had already secured the NCAC title and with it a birth in the NCAA Division III Football Playoffs, meaning there has been little time to waste in getting ready to host an opening round game.

DePauw (8-2, 8-1 NCAC) will welcome in Heartland Collegiate Athletic Conference champions Rose-Hulman Institute of Technology (8-2, 7-0) Saturday for a noon kickoff to determine who reaches the round of 16 next week against the winner of Greenville and No. 3 Wisconsin-Whitewater.

Tickets will be available at the gate on Saturday beginning at 10 a.m. Cost is $15 for adults, $10 for students (with ID) and seniors and $5 for children under 11. Children two and under will be admitted free. DePauw students will also be admitted at no charge by showing their ID as DePauw will cover the cost.

The Blackstock parking lot will open at 9 a.m. and the stadium gates will open at 10:30 a.m. Clear bags are recommended for fans, but all bags are subject to search.

The Engineers dominated the HCAC in 2021, winning all seven conference games by double-digits and an average margin of 32 points, scoring more than 40 points in five of the wins and scoring no fewer than 31 points in conference play.

Rose-Hulman’s closest game of the HCAC slate, a 31-21 win over Hanover, was the only one in which it trailed in the second half, digging out of a 21-7 hole with 24-straight points to close the game and doing so in commanding fashion.

Out of conference play, the Engineers went 1-2, losing to Wabash in its season opener 33-23 and losing by a score to Hope 27-20 while escaping Trine with a 31-30 win after foiling a two-point conversion in the final two minutes of the game.

Over the course of the season, Rose-Hulman has swamped opponents, averaging 440 yards of offense to just 292 for opponents each game. The Engineers throw for just over 300 yards per game while rushing for 138 yards to keep foes guessing.

Running out of multiple spread looks, the Engineers ride the arm of quarterback Andrew Dion, who is 198-of-314 for 2,902 yards and 29 touchdowns against just nine interceptions.

Noah Thomas has been the favored receiver for Dion, catching 54 passes for 955 yards and 10 touchdowns while Daniel Huery is the No. 2 choice with 46 receptions for 713 yards and seven scores.

Dion will also aim frequently at Adam Tice-Saliu (39 catches, 560 yards, three touchdowns) and Jailen Hobbs (36 receptions, 457 yards, five touchdowns), the latter of which who will lineup in tight end and H-back spots.

Shane Weishans is the primary back, carrying the ball at least 25 times in the last three contests and reaching the 100-yard mark in the last two games. Weishans has 188 carries on the season for 731 yards and 12 touchdowns along with 14 receptions for 141 yards and a score.

Defensively, Rose-Hulman runs a three-man front with linebackers Michael Stevens and Kyzer Bowen leading the team in tackles with 77 and 56 respectively.

The linebacker level is fluid with two primarily lined up behind the defensive line. Flexibility in the secondary allows for others to line up as extra pass rushers or out in coverage to create multiple looks and different ways to pressure quarterbacks, an area DePauw will need to be wary of after a tough second half against Wabash.

On special teams, freshman kicker Jonathan Oliger is 6-of-9 on field goals with a long of 42 while Brett Turtle was 2-of-4 early in the season and now primarily handles kickoff duties. Andrew Toler handles punting duties, averaging just under 35 yards per punt on 38 boots with a long of 63 yards. Hobbs is the primary return man with a 59-yard punt return to his name.