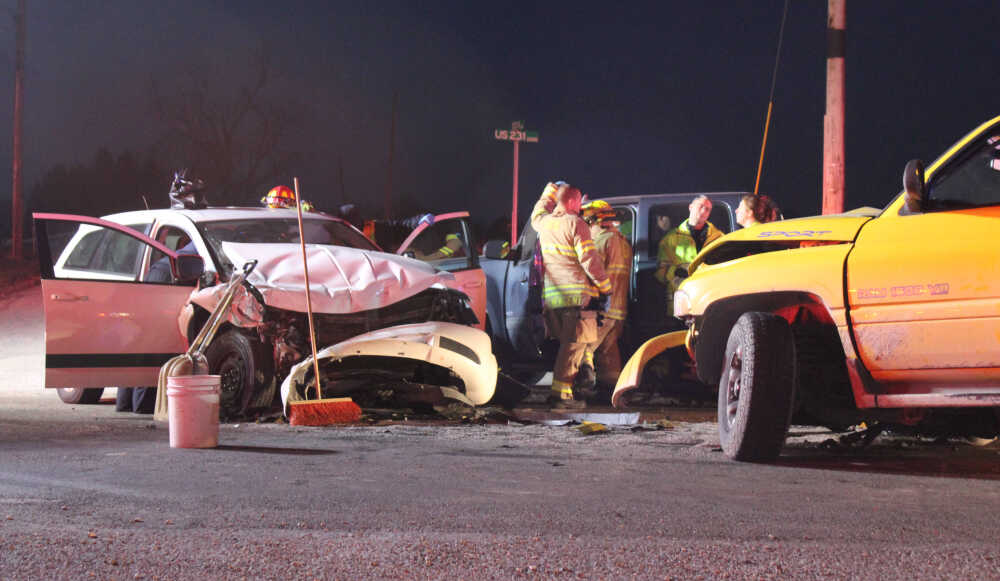 Greencastle firefighters and EMS personnel tend to the scene of a three-vehicle crash at the intersection of County Road 200 North with U.S. 231 Tuesday evening.
Banner Graphic/BRAND SELVIA

One motorist was transported with non-life-threatening injuries after a three-vehicle crash on U.S. 231 Tuesday evening.

At about 5:35 p.m., first responders were dispatched to the intersection with County Road 200 North for what was reported as a head-on collision. They found two trucks and one SUV were involved.

Two trucks, a blue one driven by Harlin Stockton, 78, Greencastle, and a yellow one driven by Shawn Ottinger, 50, Roachdale, were traveling when Stockton attempted to turn east. Ottinger then clipped Stockton’s truck and sent it into the path of the southbound SUV driven by Jessica Mitchell, 28, Bainbridge.

Mitchell was transported to Putnam County Hospital for treatment and later released. Meanwhile, Ottinger and Stockton both signed statements of release.

Traffic going both ways was backed up for approximately an hour-and-a-half before the road was reopened at about 7:05 p.m.

Firefighters assisted with patient care and also cleaned debris from the roadway. Curtis Wrecker was called to pick up the three totaled vehicles.